A new gameplay trailer has revealed more about the world of New Tales From The Borderlands.
Leah J. Williams 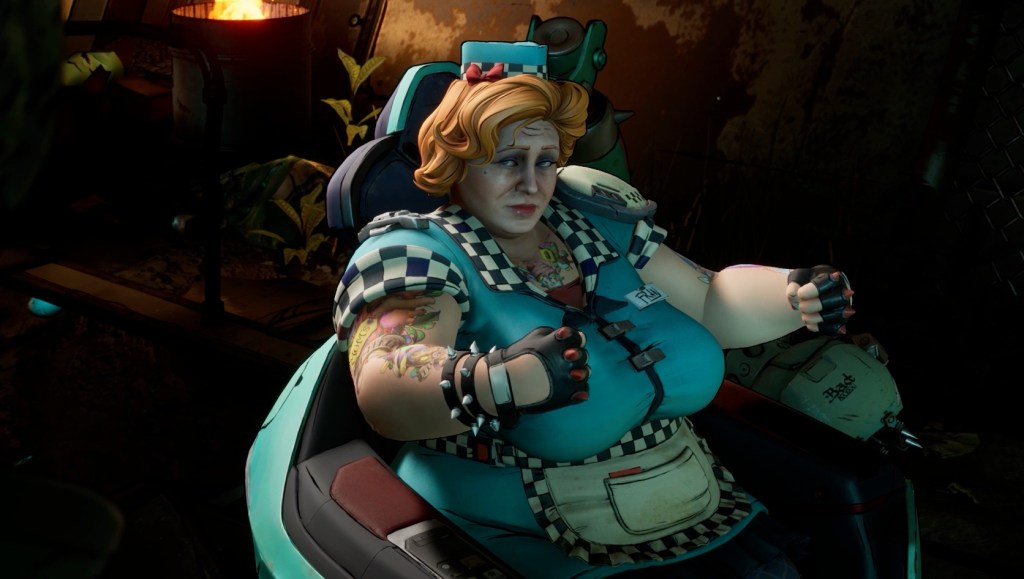 A brand new gameplay trailer for New Tales from the Borderlands revealed at PAX West has shown off more of the game’s action, and its hapless cast of heroes. The trailer largely focusses on the underground caverns beneath Fran’s frozen yoghurt shop, and the game’s quicktime system of combat, which includes tactical fighting segments inspired by classic tabletop games.

The new trailer kicks off with protagonists Anu, Octavio and Fran wandering the caverns beneath Fran’s frozen yoghurt shop, which are filled with dangers around every corner. It also gives Fran her time to shine – with her rocket-powered hoverchair getting a major showcase in this trailer. While it does aid mobility, it also features grappling robot arms and a high-powered punch, amongst other weapons. Fran may look like a fro-yo queen, but she’s also an extremely strong combatant, and the muscle of the brand new trio.

‘Anu is our shy scientist who is risk averse, definitely not interested in violence, and is kind of socially awkward,’ James Lopez, Director of Production at Gearbox Software explained to GamesHub in a recent media preview. ‘Then we have her opposite in Octavio, who is very outgoing. He’s charismatic in a goofy way. He’s our street rat that thinks he can fake it ’til he makes it.’

Along your journey with these characters, you’ll be able to make distinct choices that’ll change your playthrough, and the story you follow – as in the first Tales from the Borderlands.

‘Choices are presented to you, and every choice is important,’ Frédéric Scheubel, Producer at Gearbox Studio Quebec said of the changes made to New Tales from the Borderlands. ‘We went away from the hint of “this character will remember that” … because we want players to feel that every choice is important … Consequences of a single choice here may have consequences in later parts of the story, and influence what ending you’ll see.’

These choices and moves aren’t limited to simple decisions. As the story plays out, you’ll enter into combat scenarios that require quick-time actions like throwing rocks, or throwing hands. Not everyone loves Quick Time Events (QTEs) however, and as Lopez makes clear, you don’t need to have these turned on during gameplay. If you head into the game’s settings, you’ll be able to tweak these QTEs to your preference.

You’ll need to use mouse clicks or button presses to win, while responding to quick time inputs as fast as possible. When you win, you’ll be able to claim your opponent’s Vaultlander for yourself, eventually gathering a vast collection of heroes.

‘It’s about having fun and bringing something different to the story – a break of pace,’ Scheubel explained. ‘This mini-game [starts with] a battle with Badass Superfan, who you may encounter a bit later on in the story, as well. The idea is to provide something for people to collect – there are around 20 Vaultlander figurines spread across the whole story, and you can acquire them by winning Vaultlander fighters, by exploring areas, or simply by resolving dialogue.’

‘There’s something to say about Borderlands humour wherein the stakes of your life or your death are bound to a fight between two adult males playing with toys in sewers.’

Following the epic battle in the game’s trailer, more is revealed more about the plot of the narrative. It appears arms manufacturer Tediore will be the main villain of this adventure, with armoured guards stealing a Vault Key (from Rhys, Atlas CEO) in the hopes of unlocking untold treasures and power.

Anu, Fran and Octavio attempt to thwart these villains, by using every trick and power in their slim arsenal to survive. It appears they’ll need a lot of help to get through their strange ordeal alive – a situation that will likely be familiar to those who’ve played the original Tales. While this story is a standalone chapter, Gearbox believes there are strong thematic ties between the games that will enchant returning players.

‘An undercurrent of both [games is] it’s about family. In Tales, Fiona and Sasha are actual sisters and they’re quite close, but even then the relationship is tested through the betrayal of Felix … the kind of curveball thrown into things, and you’ve got galactic stakes with Vaults,’ Lopez said. ‘We have some of these tests here also, because Octavio and Anu are siblings. There’s also similar themes about pursuing power. What does that mean – and what are you willing to sacrifice for that? Is it worth it? Who do you become?’

Each character is driven by different motivations in the adventure, with Anu dreaming of a world with less bloodshed, Octavio wanting to make it big in the ‘Dirty 30’ list, and Fran wanting revenge for her frozen yoghurt business – plain and simple. It’s these values that drive your adventure, and every choice you make along the way.

While it’s tough to let go of the original Tales cast, Gearbox is forging ahead with memorable new characters created with veteran members of the original Telltale Tales from the Borderlands development team.

According to Lopez, this level of experience with episodic, narrative-driven storytelling was essential for creating the game. Engaging former Telltale staffers meant having an experienced team knowledgeable about how choices could be implemented in-game, and how these could lead to branching, altered narratives. It also meant New Tales from the Borderlands was backed by the same creative ideology that birthed the original Tales and its rabid, passionate fanbase.

The team has been working on the script since the end of the Borderlands 3 era. With the game finally heading towards release, there’s high anticipation around what Tales has become, nearly a decade after the original game launched. The brand new gameplay trailer sets a gnarly, tongue-in-cheek tone for the story, and there’s every indication it will live up to the promise and heart of the original Tales from the Borderlands.

It’s always tough to leave your darlings behind – but Anu, Fran and Octavio are instantly loveable, and should help New Tales from the Borderlands connect with a brand new audience.