New Tales from the Borderlands trailer reveals mayhem, the return of Rhys 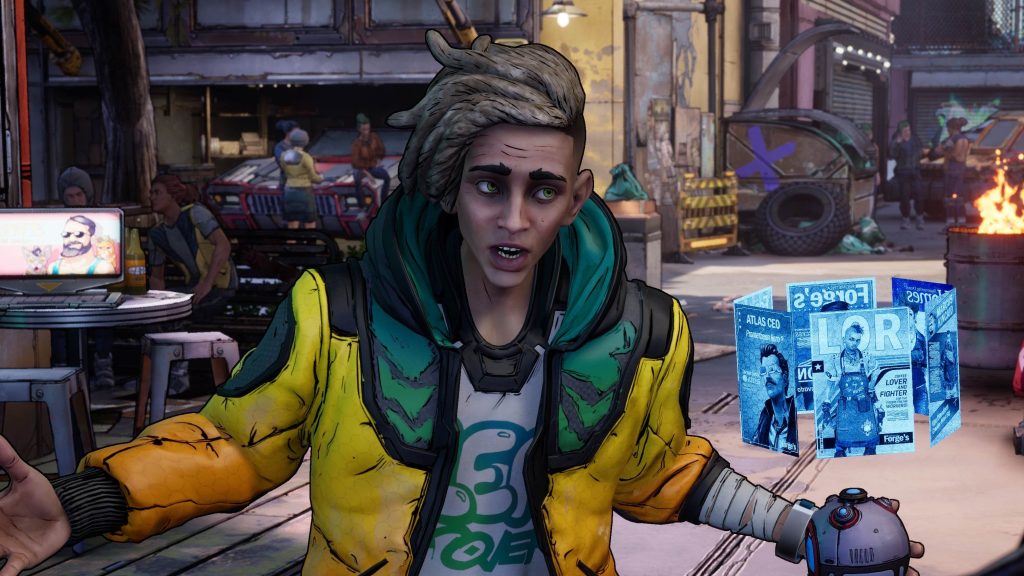 New Tales from the Borderlands has officially been revealed amidst Gamescom 2022 in a brand new trailer spotlighting the chaos and carnage of Promethea, as well as the game’s new trio of hapless heroes. While described as a brand new, standalone adventure, this chapter-based narrative from Gearbox and 2K Games will have deep ties to the world of Borderlands, and even feature some returning, fan-favourite characters, like Rhys.

Rhys was one of the main protagonists of the original Tales from the Borderlands, a game that charted his rise from a lowly employee (and Handsome Jack idoliser) to the CEO of arms manufacturer, Atlas. His journey was further explored in Borderlands 3, although he played only a small, cameo role in that game.

He appears in the brand new trailer for New Tales from the Borderlands, the sequel to the original game, and will play an important role in the action.

‘The goal … is always that returning fans enjoy it, and notice easter eggs and references to previous games – but that we’re also making this be the sort of game that’s easy for new players to understand,’ James Lopez, Director of Production at Gearbox Software told GamesHub ahead of the trailer reveal. ‘It’s an entirely new cast, with the exception of a few cameos … you’ll notice Rhys is in there. Rhys shows up from time to time.’

As for other cameos, these have not been confirmed. Lopez told GamesHub that the Gearbox team wanted to keep New Tales from the Borderlands ‘as contained with new characters as possible’ so that the team can explore a whole new world filled with surprises.

When asked directly about beloved character Fiona (originally played by Laura Bailey) making another appearance, Lopez enthused about the memorable cast of Borderlands as a whole, but did not confirm an appearance.

‘At this point we have over 20 vault hunters,’ Lopez explained. ‘We have this gigantic phonebook of characters that we can’t possibly do callbacks to all of them.’

According to Lopez, the game is set about a year after the Maliwan and Children of the Vault War that was featured in Borderlands 3, in a time when the world of Promethea is still in chaos. In the wake of disaster, New Tales from the Borderlands characters Fran, Anu and Octavio are attempting to survive new threats, and an overly hostile world.

New protagonist Fran is a frozen yogurt store owner who uses a rocket-powered hoverchair for mobility, and she actually has a deep history in the Borderlands universe. As Lopez pointed out to GamesHub, ‘Fran’s Frogurts’ was Rhys’ favourite store on Promethea – and it was repeatedly destroyed during the chaos of war.

With manufacturer Tediore seemingly starting a brand new invasion of Promethea in New Tales from the Borderlands, with the aim of finding a treasure-filled Vault, Fran’s store is once again in trouble – which forces her into the fray.

‘Fran was a collaboration across multiple Gearbox teams, including art, design, and narrative. We wanted a character who was strong, dynamic, and full of emotional depth as she seeks to protect her friends,’ Lopez told GamesHub. ‘Throughout her development, the team conducted sensitivity reads and playthroughs. In addition, we met with accessibility advocates to help ensure that Fran was authentic and not solely defined by her use of a hoverchair.’

In the game, Fran is joined by scientist Anu, and her ‘streetwise’ brother Octavio, who appears to be the comic relief of the trio. Each has their own strengths, and will help you forge a path in the story.

You can check out the new trio in action, via the game’s reveal trailer below:

Unlike Tales from the Borderlands, there is no mention of an episodic release for this title. It appears to be a standalone adventure that will launch as a complete, five-part story.

New Tales from the Borderlands officially launches on 21 October 2022 for PlayStation 4, PlayStation 5, Xbox One, Xbox Series X/S, Windows PC via Steam and the Epic Games Store, and Nintendo Switch.