Lumi Interactive is working to create a Kinder World 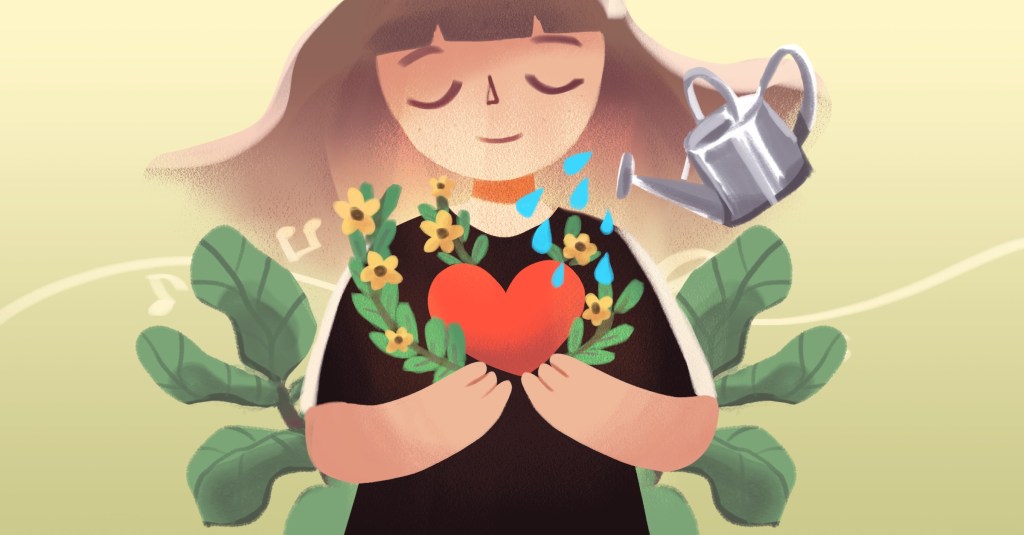 At the height of the global coronavirus pandemic, when lockdowns were in full force and the world was languishing beneath a stale, grey cloud, staff at Australian game development studio Lumi Interactive were struggling. With morale, with the state of the world – ‘broken’ by the separation and anxiety of 2020. But as the tail end of the year approached, a fire was reignited inside the team – via a game jam that studio co-founder and CEO Lauren Clinnick describes as ‘indulgent’.

‘At the end of 2020, we were like, look, let’s just take a month. Let’s just do a game jam, make something indulgent for us and just try and take a breath because we’re so burned out about it all,’ Clinnick told GamesHub during a recent interview.

The prototype for a new project, named Kinder World, was born of this game jam. While the idea started as a simple project – a house plant-themed mini-game, inspired by pandemic-era hobbies and the beauty of nature – it soon blossomed into a fully-fledged project designed to directly address mental health issues.

As the game jam progressed, Christina Chen, Co-Founder, Director and Chief Product Officer of Lumi Interactive focused on how to make the game more suitable to tackle mental health issues, and worked to develop a growth algorithm that aided a sense of realism in the game, mirroring real-life self-care exercises like watering and tending to plants. Mandy Bo, Artist & UI/UX Designer at Lumi then worked to develop a warm, Ghibli-like aesthetic for the experience, with a focus on stylising it for a wide appeal.

‘Once we prototyped it, all of us kind of sat there and were like, “oh, this actually feels really special”. We actually smile when we’re engaging with it, and all it was, was doing a gratitude activity – to water a plant, to have the plant grow,’ Clinick explained.

During this prototype phase, there were no tutorial characters (like Samy, the friendly dog) or items to collect – it was just the seed of an idea, but one that Lumi Interactive saw great potential in. Experimenting with Facebook advertising and social media marketing – the game has a large fanbase on TikTok, creating cosy content – revealed a solid interest in Kinder World, and after months of experimentation and letting the idea breathe, Lumi turned to Kickstarter to inject fresh life into the burgeoning project.

It raised AU $88,950, via 1,982 backers, to become a major success – and it was at this point Lumi Interactive began to understand the potential impact of this cosy, wholesome house-plant rearing game.

‘Going through the pandemic, we all [wanted] to feel some purpose, and some impact with what we spend eight hours a day doing,’ Clinnick said. This impact is now being felt by countless Kinder World players.

With the Kickstarter off the ground, Lumi Interactive then turned to broader questions – whether to keep the studio small, or to scale up. Whether to court a publisher, or attempt to go it alone. With support from VicScreen, the team was able to build a production fund which ‘helped them survive a little longer’ during the ideation stage.

According to Clinnick, this support was essential to getting the project well-prototyped, and ready to pitch to third parties – including venture capital firms.

Venture capital is a rare funding opportunity that sees a publisher or venture capital firm investing directly into an idea, with the strong belief it will bear fruit down the line. Venture capitalists do not own IP, but will take a revenue share when products hit the market, and hopefully become successful. In the meantime, they provide essential funding to help grow a business, and keep staff employed.

In 2022, Lumi Interactive successfully courted venture capital firm a16z, alongside companies 1Up Ventures, Galileo Ventures, Heracles Capital and Emily Greer (Double Loop Games) to raise AU $9.76 million in funding to help bring Kinder World to the masses. These firms believed strongly in Lumi’s vision for the game, and in its purpose to boost mental health and wellbeing after two solid years of pandemic blues.

‘I kind of sucked at pitching at first, and I failed. I pitched 40 times – and sometimes, it was incredibly discouraging and very difficult,’ Clinnick said. But a belief that Kinder World differed from other mental wellbeing apps in the market, due to its cosy vibes and satisfying gameplay loop, buoyed Clinnick and the Lumi team onwards.

‘I could start to see the idea of … if I can get millions, I can build a team. Maybe that’s the way that we can actually make a difference. If our vision is to make a kinder world for the future, [the game] actually has to be ambitious on that level. So that’s what made us really determined.’

Through the aid of mentors and practicing, Clinnick began to hone the pitch, better communicating the team’s vision and purpose – and how it planned to change the world through daily mindfulness in a virtual world. In March 2022, the team was finally able to secure finding, with a very healthy seed round driven by a16z. This investment is the largest ever given to a female-led game studio in Australia.

Monetisation and growth in Kinder World

With funding secured, and the team able to comfortably grow Kinder World, Lumi then turned to their primary goals for the game, analysing the best method of encouraging mindful activities, while ensuring care in Kinder World was fruitful and satisfying, rather than chore-like.

To provide the widest scope for enjoyment, it was decided the mobile title would be a free-to-play experience, buoyed by minor microtransactions – new pots and accessories – for players who wanted their virtual worlds to thrive. These are not necessary and are never thrust towards players, only functioning as cosmetic additions that can help to keep the lights running at Lumi. They’re also part of what enables the game to be available for everyone, as needed.

‘We completely acknowledge there can be really gross practices in [free-to-play games], really leaning on people for monetisation,’ Clinnick said. ‘But from our perspective, mobile free-to-play is incredibly honest, because we only make money when people are playing our game. We make a little bit of money from a minority of players – it’s very small … We only make money if you want to open [Kinder World]. We only make money if it’s a natural, good feeling part of your day.’

Lumi Interactive leans towards a ‘positive monetisation’ model – rewarding players for their gameplay, rather than treating them badly if they fail or take too much time.

‘When you’re looking at designing a free-to-play economy, one of the key design decisions you might try to make is, “do we monetise when bad things happen to a player, or do we tend to monetise when good things are happening to a player?”,’ Clinnick explained.

‘There’s always a balance of us building trust with a player first, before we’re like, “optionally you can choose to monetise”, and also guaranteeing that even if a player never monetises, they can still have a really nourishing experience. So, it’s very important to us that we are not monetising or gating any of the actual wellbeing activities.’

Rather than being driven by pain motivation or a demanding gameplay loop, Kinder World is driven by freedom and optional customisation for plant pots. Clinnick spoke of wanting to create a safe virtual space, with as little tension as possible – after all, we’re all still feeling burned out by the pandemic, and difficult or needy games can become a point of unwelcome stress.

Kinder World is shaped by love and clinical psychology

Kinder World is a game that demands little of players – encouraging participation on an ‘as-needed’ basis. There are no disincentives for leaving plants alone, only prompts to engage with clear mindfulness, curiosity, and an appreciation for the beauty of nature. These are values imbued by the Lumi team, which is led by experienced women in senior positions – all of whom are mindful of the impact a company culture can have on creativity.

‘When a studio is like, “we’ve got great representation in our staff”, I always want to ask – well, what does leadership look like? Because the leadership is actually the power in the room, the culture that gets set … The way we make decisions is actually pretty unique to us … The corporate cultures we want to set focus on [are] kindness, curiosity, appreciation of beauty, and nature. Those are actually really rare.’

In creating an emotionally safe, understanding studio atmosphere where women and those of underrepresented genders are able to share their creativity in a welcoming environment, the ideas behind Kinder World can thrive and grow – behind the scenes, and in the eyes of players. The mindfulness and positivity of the game reflects a studio culture buoyed by understanding and patience.

‘Even when we were prototyping, we were reaching out to psychologists to say that it’s very important to us that we don’t do harm, but also that we don’t repeat just what’s out there,’ Clinnick explained. ‘From working with psychologists very early on, we were able to find that we could offer players a different experience by making it personalised … and player-driven. It should be creative, but it should also be snack sized, and there also should be options to just say, I just don’t have the spoons today.’

The team implemented these principles with great care, analysing how solo, passive and linear gameplay could encourage retention and engagement on a daily basis. In bite-sized chunks, Kinder World aims to help players slow down, reassess their mental state, and lose themselves in calming gameplay loops that only require minimal effort – but yield great reward, as flowers grow and blossom in delightful new patterns. In future, these loops will grow in shift in new ways.

‘We’re working on some wellbeing activities that I’m really excited by, that is very directly informed from the research [Hannah] prepares, that they transmute and work on with [fellow] designers that we have on the team,’ Clinnick said.

The Lumi Interactive team has just been invited to its first behavioural psychology conference, in early 2023, to talk about how this work is implemented, and how Kinder World is working to address mental wellbeing, mindfulness, and meditation in the modern world.

It’s an exciting time for the company, as it continues to expand and work on building a truly kinder world. While the Kinder World mobile game was born of a dark era, and out of the stress of lockdowns, it’s fair to say it wouldn’t exist without them. As a wholesome, shining beacon for the future, it represented a great hope for Lumi – and has buoyed the company out of rocky waters, into the safety of blissful shallows. Look forward to seeing more from this Australian studio as Kinder World continues to thrive.

Kinder World is currently available on iOS and Android in early access.