Lead Audio Designer Fraser Strachan talks about how his role and work fits within the Playground Games team, and how a start in filmmaking led him to game audio.
Chris Button 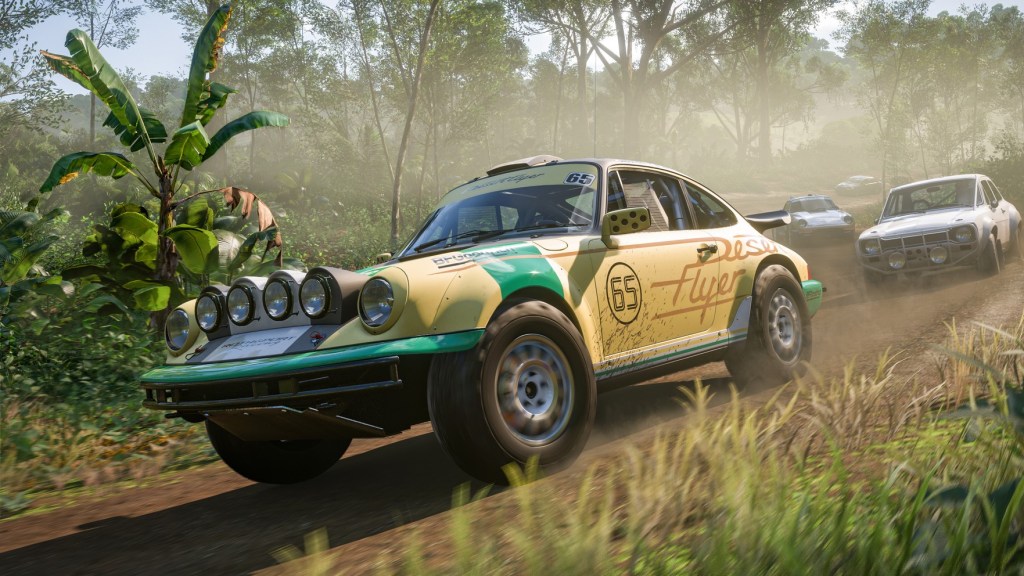 Forza Horizon, made by the aptly-titled UK team Playground Games, has become one of the most popular racing franchises on the planet thanks to its high-octane driving, beautiful open worlds set in real-life locations, and joyous music festival settings.

The Mexico-set Forza Horizon 5 pushes the series to another level, with a fresh new Coachella-worthy soundtrack and gameplay enhancements across the board.

This includes many improvements to the series’ audio design, which was recently detailed in an official livestream by Fraser Strachan, Lead Audio Designer on Forza Horizon 5.

In the video, he explained how the team captured more than 320 new car recordings, incorporated a more natural car sound-looping system called granular synthesis, and how ray-tracing helped to create realistic soundscapes.

Strachan spoke to GamesHub about how he landed a career in video games working on audio, how the team designs audio for such a large game, and what he hopes players will enjoy from the latest Forza adventure.

Making a career in audio design

Audio design may not be the first thing someone thinks of when considering a career in games, which resonates with Strachan’s career trajectory to date.

‘I started out trying to get into film and television, and I actually studied film first – digital filmmaking,’ He said. ‘And it was actually through studying that I developed a bit of a love for sound design; I realised that you can’t make something look good if it doesn’t have the soundtrack to back it.’

Strachan then studied an audio production degree that was broad in nature, covering topics such as post-production, game sounds, and music production. He hadn’t considered a career in the games industry at that point.

‘I actually started off working in post-production for film and working my way up doing linear sound design, which I still recommend to a lot of people getting into the industry to do,’ Strachan said. ‘That can be one of the best ways because you really hone in on what it takes to just make something sound good in the first place.’

It wasn’t until a few years later, when one of his friends highlighted the need for audio experts in video games, that he saw the games industry as a viable option. An avid gamer himself, Strachan sent ‘hundreds of applications’ to various game studios before he landed a role.

‘Playground Games gave me a chance,’ Strachan said. ‘I kind of got in at the bottom level, as a base level audio designer, and I’ve been at Playground Games for about seven or eight years now. I started on Horizon 2, and I had a goal to try and champion car audio ever since.’

The art of creating audio

In his current role as Lead Audio Designer on Forza Horizon 5, Strachan works with a team of roughly five audio specialists who produce just about everything you hear in the game. This number increases to about 40 people when factoring in contractors and people at Microsoft who assist with the audio production.

Part of being an audio designer on such a large game is being flexible in accommodating requests from different departments within the studio. A typical day for Strachan involves juggling various responsibilities and acting as a conduit between the audio team and the rest of the studio.

‘I set up the audio designers, make sure they’re all doing what they need to be doing throughout the day,’ Strachan said. ‘And then I’ll go off and speak to a lot of the other leads of the other departments to check: “what’s going on today? How’s this feature looking?”‘

‘A lot of the time, it’s actually people coming to the audio department to say “hey, you know, that thing? Yeah, we need sound for it now” then I have to reschedule everyone around,’ he added with a laugh.

With Forza Horizon 5‘s music festival setting, there are many more sounds to implement than the roar of car engines. Radio announcers, curated playlists, and natural ambience all feature prominently.

In casting the game’s announcers, it’s one of Strachan’s roles to work closely with Mike Brown, Forza Horizon 5 Creative Director, to ensure the talent reflected the setting.

‘We’re looking at things like Mexican representation and making sure that we’ve got a diverse cast, and that we’re being inclusive,’ Strachan said. ‘So my job will be to ensure we’re going out and casting a wide variety of people.’

As for the care taken to capture Mexico’s unique ambient sound, it may seem odd to go to great lengths for a game about loud music and even louder cars. But it’s important to get these details right, while also making the most impact when racing gets underway.

‘For instance, when you load into a race, we have music playing through the loading screens, but we will pull the music volume down just to give you a sense of calm before the storm…and then you can hear the ambience of wherever your race is about to start,’ Strachan said.

‘We try to cater for lots of different types of players, and Horizon‘s an interesting brand of game because it does allow you to drive at 200 miles an hour and live your best life. But you can also stop and completely just zone out from driving.’

‘There are actually a number of people on YouTube who have channels where they just drive slowly through the through the countryside. I think it speaks a lot to people, the exploration side of the game – play it the way that you want. And for us, I don’t think you can represent Mexico or any country that we visit authentically without representing the palette of sounds that you hear.’

Strachan is particularly passionate about capturing the feel of a location through sound, using Edinburgh’s portrayal in Forza Horizon 4 as an example. He grew up in Edinburgh and felt a sense of responsibility to capture its unique sound and do it justice, an approach he also adopted for Forza Horizon 5‘s Mexican setting.

Given the special place Forza Horizon 3 has in many Australians’ hearts, it would’ve been remiss not to ask about what made our landscape a distinct soundscape from the other locations the Horizon Festival has visited.

‘It was the soundscape of the birds and the wildlife that set Australia apart from anywhere else that I’ve really heard,’ Strachan said. ‘There’s such a wide variety of unusual sounding birds to implement and – it is the birds. No matter where you go in the world, [the birds] tells you where you are.’

The Australian Outback also houses a far different sound to that of Mexico’s deserts, which made for an interesting recording experience.

‘A lot of people might think the Outback would sound very similar to the desert in Mexico, but they’re completely different,’ Strachan said. ‘But there’s that feeling and sense of temperature that comes with it. There’s a scorched sound – that sounds strange to say – but there is a feeling of “scorched-ness” to the Australian Outback compared to the Mexican living deserts, which sets that apart as well.’

Bringing people together with music and monkeys

Given how heavily the live music industry has been hit by the pandemic, it dawned on Strachan and the Playground Games team during development that Forza Horizon 5 might be the first music festival of sorts people would attend in the ‘post-lockdown’ period.

As with previous Horizon games, the team wanted to ensure there were local acts reflected in the lineup. To capture the unique vibe of a music festival, they spent plenty of time looking at who would typically feature at real-life Mexican events.

‘We try to look at a lot of festival posters and stuff that’s going on in the area’ Strachan said. ‘It’s always really interesting to research what local festivals happen in the region that we’re gonna take a game to.’

‘And we’re looking at, not just the headliners, but the middle names and the bottom names as well, because typically the names lower down on festival posters are the ones that in two years time are going to be absolutely massive, and people are going to be talking about them.’

Research also involved reading local publications and blogs about emerging artists, as the Horizon series is well-positioned to provide a global platform for acts local to the setting.

‘A lot of the artists – such as the band called El Shirota, and Technicolor Fabrics – a lot of them came to me through finding articles that were saying “here’s top 10 bands to look out for in the next two years” because these bands are going to be massive.’

‘We really do try and treat the Horizon Festival as if it’s a real festival in the real world where we’re showcasing larger talent, but we’re also trying to nurture a lot of talent, let people hear bands that they haven’t heard before.’

In between thumping music tracks and the screeching of tyres, one amusing detail that brought Strachan and his team a strong sense of pride is how they integrated Mexico’s native howler monkeys into the game.

‘When we were out recording sounds in Mexico, we actually found that there are howler monkeys everywhere in the jungle, but they actually don’t like cars,’ Strachan said. ‘So they actually shout at cars really, really loudly.’

‘We actually use the same values that we use for crowd excitement to drive the sound of howler monkeys as you’re driving around.’

Upon discovering this fact, the audio team included sections you drive through where howler monkeys are gathered in nearby trees, reacting to your racing prowess in real-time, and shouting accordingly.

It’s details like this, and rich layers of audio design, the team can’t wait for people to experience in Forza Horizon 5. Receiving positive feedback from players and media alike creates huge buzz and lasting memories, which often spur developers forward when working on a new game.

‘Throughout the whole three years of development, there isn’t a day that goes by that the audio team don’t go “I can’t wait until people can hear what we’re working on”, and I think you need that end goal to help you really see the light at the end of the tunnel.’