The brand new card game is set to change the landscape of Tamriel.
Leah J. Williams 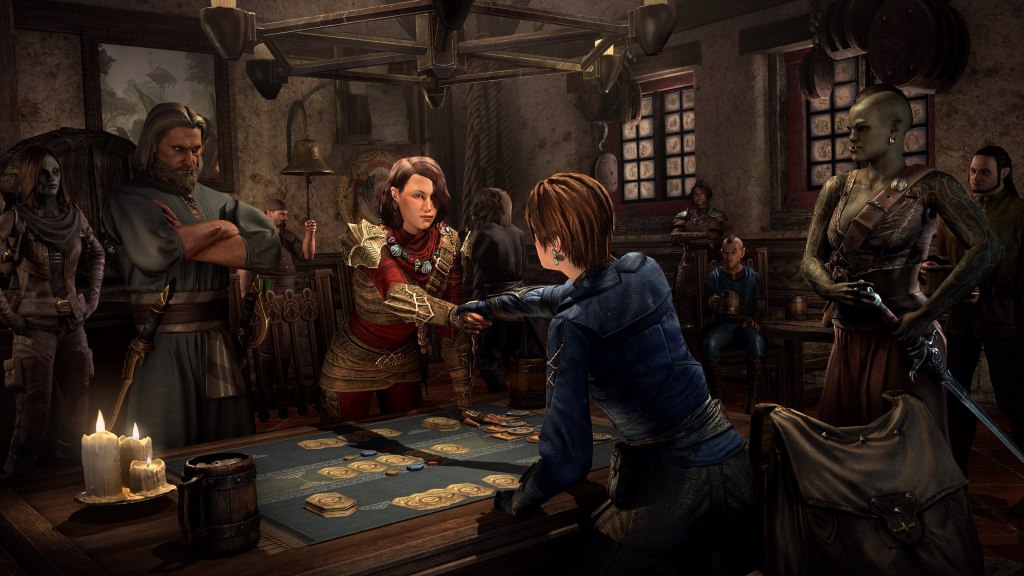 Games-within-games have become phenomenally popular over the last few years, with hits like Gwent breaking out from The Witcher 3 to become its own competitive, standalone title. Assassin’s Creed Valhalla achieved something similar with Orlog, a dice game that eventually turned into a real-life product. In The Elder Scrolls Online: High Isle, Bethesda is looking to do the same via Tales of Tribute, a new game-within-a-game designed to hopefully enthral players.

What The Elder Scrolls Online has always done best is invite players to ‘spend time’ in its world – whether that time is spent fishing, chatting with friends, exploring vast worlds, completing quests, decorating a home, or just gliding by. With no real time constrains or imperative to ‘complete’ the game, The Elder Scrolls Online is content to let players go at their own pace. To move with the flow of the world, and take everything one step at a time.

According to Rich Lambert, Creative Director on The Elder Scrolls Online, this design is intentional – with new content arriving in the game’s High Isle expansion being a natural ‘next step’ that allows players to become more present in the fantasy world of Tamriel.

‘As technology has gotten better, and as games have gotten bigger, people want to explore more of [these] worlds … want to be a part of [these] worlds. I think the [additions arriving in High Isle] are a natural part of making you feel like you’re part of that world,’ Lambert told GamesHub.

‘Sometimes you don’t want always want to be “on”. You don’t always want to have to focus on combat, or spend a long time going through a quest, or figure out whatever it is you’re figuring out within the game,’ Lambert said. ‘So just being able to sit back and enjoy to view, so to speak, and just do things at your own pace is really important. It lets you unwind and appreciate the world, and it lets you get to know the world better, I think.’

To better engage players in the lifestyle and culture of High Isle, which is positioned as a ‘upper class’ society filled with nobility, The Elder Scrolls Online is introducing Tales of Tribute in its new expansion – a strategic card game that involves intensive card placement as players compete to earn the favour of Patrons or work towards gathering 40 prestige points to win rounds.

Essentially, it works a bit like real-life card games Ascension or Dominion, which lean heavily into deck-building mechanics. Both titles served as inspiration for Tales of Tribute as the Bethesda team worked to define the rules and action of the game.

‘We looked at a lot of different things … the biggest thing we wanted to do was make sure this feels like it belongs to the world of Elder Scrolls. So we took some elements, some inspiration from [real life] games and then made it our own,’ Lambert explained.

Several members of the Elder Scrolls Online development team have a history in the board games industry, so the team was able to ‘leverage’ their ideas and passions to help prototype and iterate Tales of Tribute as the vision for the new expansion came together.

In Tales of Tribute, players start with a deck of cards, each of which requires a coin cost to play on the field, and which results in a particular effect. Some cards will give players extra gold when played. Others will contribute to prestige points which can help win the game. There’s also an element of action – in that Agent cards have health, and can be played as soldiers in the field – but the most important part of Tales of Tribute is its strategy.

Both players will need to earn favour with the Patrons of each deck, working to up their prestige points by playing cards, while also attempting to coax Patrons to their side during gameplay. This strategy, which feels a bit ‘noughts and crosses’ is fairly tricky to pull off as all players are able to interact with Patrons.

‘You can only use one patron per turn, and your opponent can use a patron to switch it back and forth between favouring [you and being] neutral,’ Lambert explained. ‘So there is strategy there.’

If four patrons are ‘won over’, it’s an instant win for your deck – meaning you’ll need to focus on earning victory points and watching out for those pesky Patrons.

Players will be able to face off in both PvE (Player vs. Environment) and PvP (Player vs. Player) battles, with some being part of subquests in High Isle. But it’s not just High Isle where you’ll find willing Tribute fans – according to Lambert, new Tales of Tribute matches will be found across all of Tamriel.

That said, it won’t be necessary to play rounds if you’re not looking to devote more time to the game – it exists as an addition to the main gameplay. While there’s hope it will ensnare a passionate group of card game devotees, there’ll also be plenty of other content for wily ESO players to enjoy – including new trials, like defeating the pirates of Deadsail Reef, and exploring the political minefield of High Isle and its companion prison island, Amenos.

For now, Tales of Tribute will remain as a fun, relaxing addition to the main High Isle plot – but there is currently hope for the game to expand beyond the scope of Tamriel. Lambert made clear that the team is currently focussed on High Isle first, but said he ‘would be lying if [he] wasn’t thinking about’ other avenues for Tribute.

In future, it would be unsurprising to see Bethesda break out this title, or even produce a real life equivalent – particularly if it proves popular following the launch of High Isle.

With the new expansion adding in gorgeous new realms, a hefty dose of political intrigue, and a vastly more human story, Tales of Tribute seems like it’ll be an excellent addition to the already-packed world of The Elder Scrolls Online. If you’re somebody that enjoys just being in a game, then this is certainly an inclusion that’ll contribute to the relaxing vibe that’s so far been cultivated in The Elder Scrolls Online.

The Elder Scrolls Online: High Isle is set to launch for PC and consoles on 6 June 2022.