darkwebSTREAMER explores the lengths live streamers will go to for attention. Its creator, Chantal Ryan, spoke to us under the condition that we livestreamed a horror game while doing so.
Samantha Low 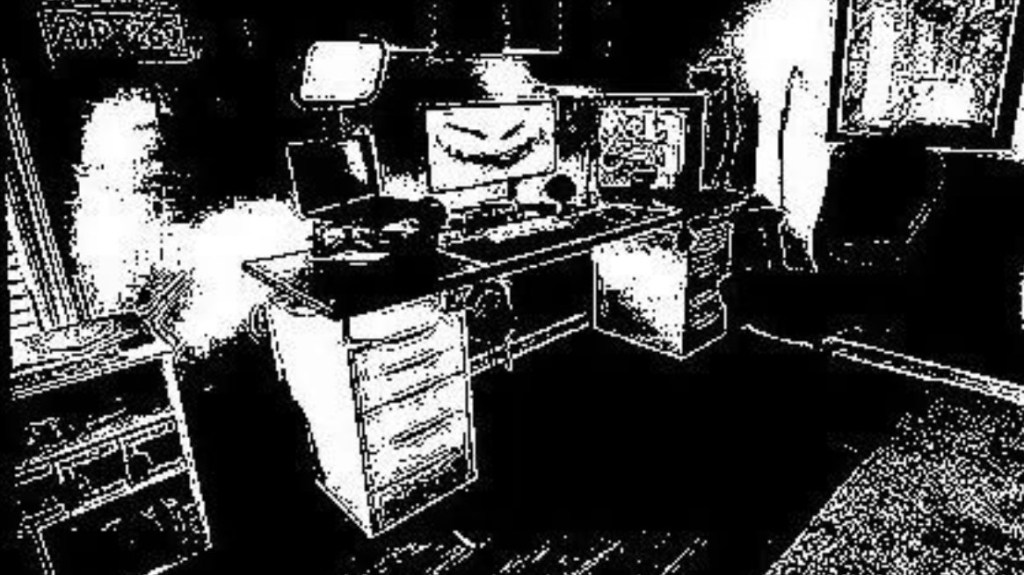 Hitting the ‘go-live’ button on any streaming platform is scary enough for most people, but darkwebSTREAMER, an upcoming psycho-horror RPG streaming sim, is giving live streamer culture a nefarious new name. In the game, players take on the role of a fledgling new streamer, chasing, according to the developer, ‘fame or death? – whichever comes first’ by exploring the darkest corners of the internet, and showcasing creepy findings to their audience.

As a casual streamer myself, introspective games that look inwards at how internet culture evolves have always intrigued me. So when darkwebSTREAMER game designer, Chantal Ryan, agreed to be interviewed on the condition we do it while playing the multiplayer horror game Phasmophobia, the curious cat in me won over the scaredy-cat.

I booted up the game and went live on my Twitch channel, alongside Jun (JunchGaming) and Rach (LesPapillion), two friends and streamer mutuals who would either support me as a Phasmophobia newbie, or leave me with the demons and high-tail it out of the haunted dwelling. We started off in the beginner level, with Jun explaining how different pieces of equipment work. As we entered the house, a high-pitched female voice began to fill the audio, which caused me to visibly freak out, thinking this was the ghost of this level, talking to us. It took me about 10 seconds to realise that it was just Chantal, who had joined our Discord call.

Once Chantal entered our lobby, it felt like we were in the presence of horror gaming royalty. Her character had 70-odd levels over the three of us, and many more playable areas unlocked. She was also loaded with in-game cash, so we were able to purchase more ghostbusting and ghoul hunting tools. This didn’t save me from being the first person to die in our very first round, which I maintain was purely strategic, so I could concentrate on asking Chantal more questions about darkwebSTREAMER.

‘Watching this C-grade horror film late at night is what basically inspired the game [darkwebSTREAMER],’ said Chantal, when asked about her inspirations.

‘No one I’ve met has actually heard of it, but it’s called Dybbuk Box: True Story of Chris Chambers. It’s a found footage movie told through YouTube, about a streamer who orders a haunted package to be revealed on stream to his viewers.’

‘From the beginning, you can tell he has a strong human aversion to opening the box. But he was still committed to the unboxing because of how much he had hyped it up to his viewers and his expectation of more views and subscribers. I found the interplay between these two driving forces very interesting.’

While I’ve yet to see a full paranormal takeover on stream, the reality isn’t too far from fiction. Subathons, where streamers aim to stream for as long as possible while supported by community subscriptions, are becoming more commonplace, at the detriment of the streamer’s physical and mental health. Most famously, VTuber Ironmouse and internet personality Ludwig both streamed non-stop for 31 days, earning them hundreds and thousands of subscriptions from their community as they played games, sang, slept, and in Ludwig’s case, even showered, in front of a captive audience.

On a more serious note, there are also Twitch streams and YouTube vlogs that feature thrill-seeking creators literally dying on screen in a dangerous pursuit for ‘content’.

There seems to be something ugly within us that thrives in seeing pain come onto others, and darkwebSTREAMER explores this. Through the decisions you make in the game, players will generally have to choose between one’s personal safety and sanity, against internet popularity. Random events with major consequences happen in the game, and each is procedurally generated, so no two experiences will ever be the same. I shudder to think of the actual dark web that Chantal and team have had to wade through, encountering all manner of demonic devices, human teeth and animal pieces for sale, as research for the game.

During a break from Phasmophobia, the four of us shared scary stories that personally happened to us in our lives. From near alien abductions to sleep paralysis, and a stubborn poltergeist living at home, the conversation made me realise how much horror really is a part of our culture. I couldn’t help but listen intently, no matter how creeped out I was feeling.

There was a foreboding murmur of acknowledgment from all of us as Rach described the sweet scent of Jasmine she smelled one day as she was walking home. South East Asian residents (Chantal spent part of her life in Singapore), know this phenomena well, as it indicates the presence of Pontianak (the ghost of a woman who died in childbirth) nearby. With the added participation of viewers via my Twitch chat, our interview was akin to slumber parties with friends, where we would attempt to spook each other out.

darkwebSTREAMER exploded on the internet off the back of its booth at PAX Australia 2022. Two sets of beady eyes stare back at you from the booth’s posters, which hint at the striking design that guests see once they try the pre-alpha demo. Its visual style is 1-bit, or ‘1 and a half bit’ as Chantal describes it, noting that it does have a 3rd primary colour on top of black and white.

‘I started with the art style before I even conceived of the idea of darkwebSTREAMER. I was a graphic designer for much of my life, where website design made up part of my work. I personally love the 1-bit aesthetic and grew up interested in manga styles and experimenting with comic patterns. The fact that the game takes place on the web itself, really shows that it’s an amalgamation of my different experiences and professions, UI, anthropology, design and all,’ says Chantal.

I never expected to interview a developer about a horror game while within another, or to be talking about a stream simulation while live streaming the entire process. At the end of our broadcast, I was reminded of how the impetus for doing this at all was the hope that my regular viewers would enjoy the content of me screaming and crying in Phasmophobia, as I held on tight to my emotional support Chansey doll.

In the attention economy, it seems even I am at fault for wanting to be noticed, at the risk of my own personal discomfort. My stream is set up so that my back is against the wall – but at the end of this particular night, I couldn’t help but turn around, just to make sure I was alone.