Cult of the Lamb preview – rejoice in His glory

Cult of the Lamb is a gorgeous, creepy dungeon crawler that'll indoctrinate you the moment you meet the titular lamb.
Leah J. Williams 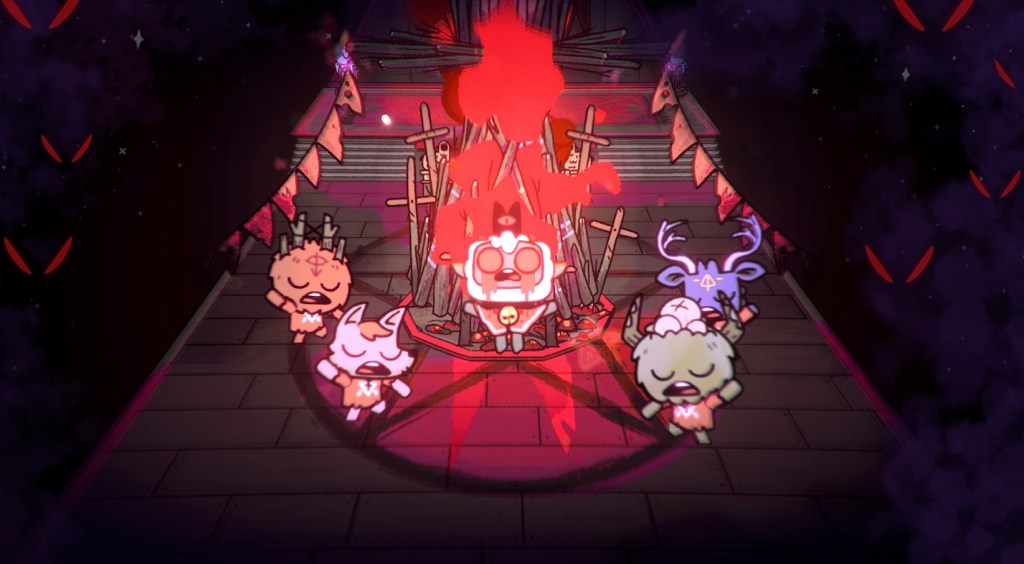 The lamb protagonist of Cult of the Lamb is adorable. When they reach down to pick berries, their eyes squeeze half-shut and their tongue slightly pops out in concentration. When they run through a woody forest, their little legs bounce and twirl amongst the scenery. But if we all know one thing, it’s that looks can be deceiving – because while this lamb is completely, entrancingly adorable, it’s also very, very evil.

We were able to get hands-on with a preview build of Cult of the Lamb to understand the full extent of this cutesy terror – a demo which featured more content than the recent Steam Next Fest demo – and what was revealed was a sight to behold. When you start a game with a brutal animal murder (the lamb’s), you have a certain level of horrible anticipation for the future. Cult of the Lamb builds on this excellently, with a creepy, gothic tale starring naive, adorable forest creatures and forces far beyond the imagination.

As the titular lamb, you are accused of being a vessel for an ancient spirit – The One Who Waits – and are put to death by the four Bishops of the Old Faith. While your body technically dies, The One Who Waits pulls strings to free you from the mortal plane, resurrecting you with unfathomable power. ‘Though you are already dead, I still have need of you,’ the ancient being claims.

To fulfil this debt and honour your new god, you are tasked with starting a cult in His name – and corralling innocent (and sometimes not-so-innocent) forest creatures to do your bidding.

To recruit creatures, you’re sent on quests through dungeon corridors, where beasts roam and the Bishops of the Old Faith have immense sway. Each creature is out to get you – and out to get other potential Followers. As you travel through dungeons, you’ll often come across innocent creatures ready to be sacrificed due to their alleged connection to The One Who Waits.

It’s guilty until proven innocent in these woods, and it’s up to you to save these creatures from a dire fate by, essentially, kidnapping them for your cult.

Once you have creatures roaming your own personal space in the woods – which can be decorated with unique items, buildings and structures – you can set them to work gathering materials, or worshipping at your altar. Each prayer from these creatures gives you strength, and allows you to level up – in combat, weapons, cult items, and dungeons. The more prayer strength you build up, the more variety you’ll find as you travel these dungeons, and the stronger your cult will become.

While the primary gameplay loop involves travelling through forest dungeons to take on enemies placed by the Bishops of the Old Faith (and eventually taking down the Bishops themselves), cult management is also a major part of gameplay, with a balance between the two needed to keep your new religion thriving.

You’re responsible for looking after the lamb’s followers by keeping them fed, happy, and highly religious, with sermons and rituals helping to build up the necessary faith to keep everyone on board. Certain members of your cult will have objections to risqué moves, with some opposing the killing of cult members, and others having a natural lean towards skepticism. You’ll need to keep an eye on all of these motives as you choose the best path for your cult and forge a path into the future.

When you eventually journey beyond the protection of your loyal cult, you’ll end up in the mysterious woods, where each realm you travel through is controlled by a single Bishop. Procedurally-generated dungeon stages guide you through the darkness, with each presenting a choice of direction – and ultimately leading you to the heart of the forest, where a boss creature sent by the Bishops waits to claim your head.

You’ll need to take down these enemies by using effective dodging and slashing – and then claim them for your cult.

Completing multiple trips into the woods will eventually invite the wrath of each Bishop in turn, who have grand plans to send the lamb back to the afterlife. But with the cult egging you on and giving you strength, it isn’t long before you can vanquish these beasts and work on building out your cult’s capabilities at your own pace.

Every step you make in battle translates to cult management rewards, including new skills for followers, and new prayer-based abilities – making each move wildly rewarding.

The split focus of the game works wonders, with both combat and cult management working hand-in-hand. Defeating monsters gives you resources that can be delivered back to the cult. Fostering loyalty with your followers helps you grow your combat skills. Each system feeds into another, making the gameplay flow feel natural – and very addicting.

While the snippet of Cult of the Lamb we played only contained the first forays into the dungeon forest, and the first steps of cult management, everything on show was impressive. The game’s purple-and-red tinged locales are gorgeous, as is its adorable, cartoonish style. Each character is a wholesome but deadly gem, and the dialogue is ripe with spooky, skin-crawling charm.

The entire game boasts a cute and colourful aesthetic that is immediately eye-catching, but it’s the meat of gameplay and the creepy appeal that really get your heart racing. With gothic stylings and intriguing story hooks, it’s an adventure that indoctrinates new players fast. Really, it’s a modern cult classic in the making.

Cult of the Lamb launches for PlayStation, Xbox, PC and Nintendo Switch on 11 August 2022. Stay tuned for a complete review closer to release.