Collecting the history of video games

We talks to Jon-Paul Dyson of The Strong National Museum of Play about archiving video games.
Jini Maxwell

Collecting pinball machines means being able to repair them along with hundreds of other arcade machines. Image courtesy of The Strong, Rochester, New York.

In September, the National Film and Sound Archive of Australia announced that they would begin collecting Australian video games for archival preservation for the first time. This marks a turning point in the institution’s approach to video games.

Historically, many cultural institutions have struggled to collect video games as cultural artefacts, but for CEO Jan Müller, the decision reflected a simple cultural truth: ‘We aim to be the national leader in collecting multimedia and new media content, and it would be impossible to accurately represent modern life without games. It is essential that games be collected alongside other audiovisual media, to ensure their continued preservation and access.’ So far, so straightforward; but as always, the devil’s in the details.

How to archive a videogame

Whether you go retro or cutting edge, games pose distinct challenges to curators and conservators alike. Not only does their hardware degrade, but digital publishers close, programs become obsolete, and bit loss (the slow corruption of data over time) chews away at the most robust of media files. Not only that – games might be fragile ecosystems unto themselves, but to be experienced, they need to be played. This goes against the old-school idea of cultural preservation: Don’t touch the art.

These challenges will be elucidated at Digital Directions 2019, a conference exploring the possibilities and pitfalls of collecting video games along with other issues of digital culture. The conference is complemented by Game Masters, an exhibition created by ACMI that showcases five decades of games that creates challenges in keeping old games playable.
Jon-Paul Dyson, the director of the International Center for the History of Electronic Games at The Strong National Museum of Play, is keynoting Digital Directions – acknowledging the NFSA’s new interest in games and their preservation. Dyson leads research into play and games, and oversees the videogame exhibits in a museum that is visited by over half a million people per year. We spoke to him about games in archives, games as objects, and the cultural and social histories contained in play. 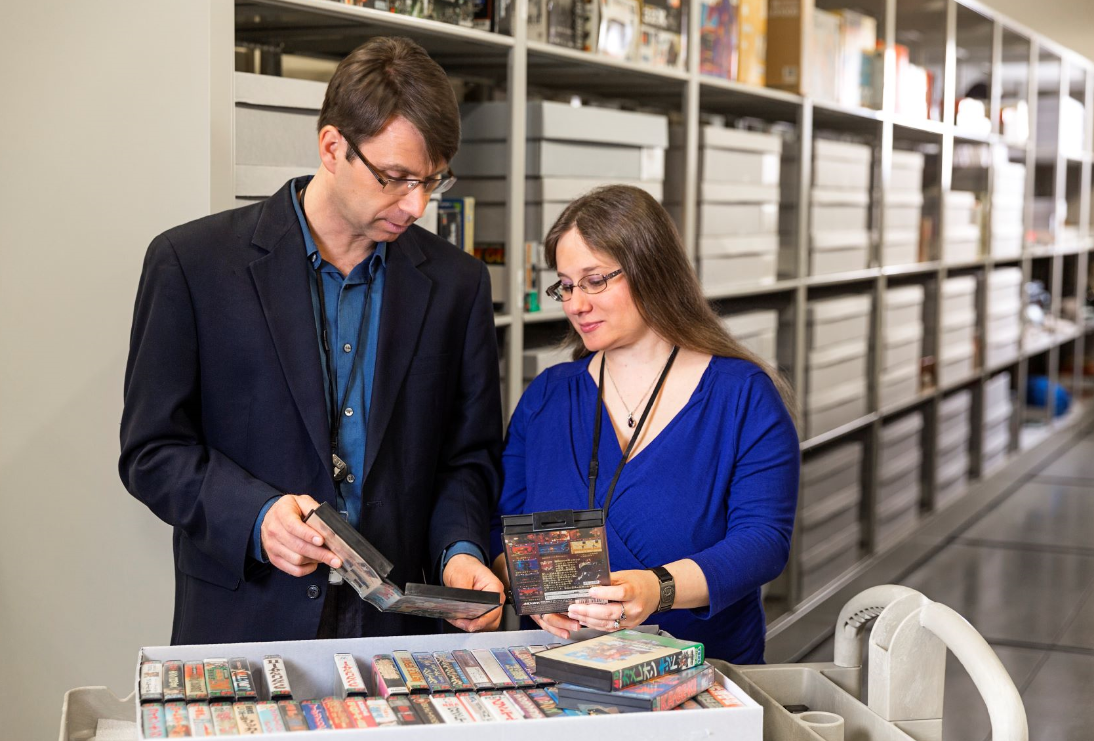 While vintage technologies might seem like the ideal choice for experiencing a game with the most fidelity, in actuality this isn’t always possible. Games, like many forms of art, are physical objects, subject to degradation over time. Exhibiting vintage technology is not a practical reality for many museums. In many cases, original equipment is simply too delicate for use, and can be impossible to replace.

Despite their fragility, video games are experiential. Dyson believes that exhibiting games in a playable form, rather than exhibiting video or keeping them behind glass, is crucial to understanding them, and sometimes this requires compromise: ‘Original Atari joysticks break very quickly in comparison to modern controllers. Thus even in a curated space emulators are sometimes necessary.’

Another complication to manage is practical: parts that were once commonplace cease production, and the migration from one form of hardware to another literally changes the game. Dyson points to classic arcade games as a perfect example of this; ‘No one is manufacturing the cathode ray tube displays that original arcade games were usually programmed for, and the image is different on a flat screen monitor.’

The line between preservation and alteration to allow access is never clear, but this is doubly true for digital preservation.

Adding to the difficulty, video games are stored in media formats that are particularly susceptible to decay. As data technology continues to advance, future-proofing isn’t the highest priority: ‘Unlike say a clay tablet from Ancient Sumer, it’s highly unlikely that we will be able to read the information on a magnetic 5 ¼” floppy disk,’ says Dyson, ‘that digital data succumbs to “bit rot” (the slow degradation of data) in mere decades.’

Digital archivists have to counter this problem by moving digital games to new and updated platforms to ensure that relatively little data is lost, but this approach is a literal game changer. Digital migration between platforms and operating systems can be time intensive, requiring alteration of a game’s files on the level of code. While it’s an invaluable technique, it brings the Ship of Theseus paradox into the digital age: can you change every line of code in a videogame, and still say it’s the same game?

Digital rights also, increasingly make it harder for archivists. Many contemporary games are available primarily (even exclusively) via download, through digital stores like Steam, Playstation, Microsoft and Epic Games. While hardware failure might seem like the most pressing concern, Dyson makes it clear that digital-first titles can be lost in the blink of an eye: ‘many modern video games that are downloadable are dependent on some form of external server for functionality, or that controls digital rights management. If the company chooses to shut down the server or deny access – and most companies are not concerned about whether their game will be playable in 100 years – then the ability to play the game will be lost.’

Given all these particular challenges, why make a place for games in the archive at all? Games aren’t just personal, and they’re not just art; they’re also cultural and political objects. The role they play in public discourse warrants a thorough field of critical inquiry, which isn’t possible without a strong academic and public engagement with videogames as a cultural phenomenon.

Not everyone is a fan of games. As cultural artefacts they have attracted a moral panic about how they might damage children and our culture that continues to resound throughout the public sphere. Dyson points out that even detractors and critics benefit from thorough research into the cultural impact of video games: ‘The more we understand why video games are so compelling, the better that we can respond to criticisms of them for features that might be construed as negative or controversial, such as depictions of violence. But to substantiate or disprove claims that video games cause violence, addiction, or antisocial behaviour, a thorough historical lens is required – one that isn’t possible until learning and memory institutions engage seriously with games.

‘Understanding societal attitudes towards older forms of media (like the rise of the novel in the 18th and 19th centuries, and the introduction of movies and television in the 20th century) can help us contextualise moral panics over video games, and the impact of video games on how we view the world.’

In fact, there are still forms that may not be possible to archive with any fidelity; Massively Multiplayer Online (MMO) games, the experience of which is tied to a community, can hardly be replicated unless you replicate a player base of thousands at the same time. Still, games like World of Warcraft have had a cultural impact that resonates throughout art, society and culture.

The archival process is radically different to the process for a Tamagotchi, or a Pong machine, but the fundamental impulse is the same: to understand these radical objects and experiences, and what they can teach us about the cultural moment we’re living through. Dyson encourages more curiosity: ‘Video games have effects on the way we play, learn, and relate to one another – they are revolutionary, and their effects need to be understood historically.’