The Nintendo Switch library is filled with gorgeous, wholesome, and cosy adventures you can get lost in.
Leah J. Williams 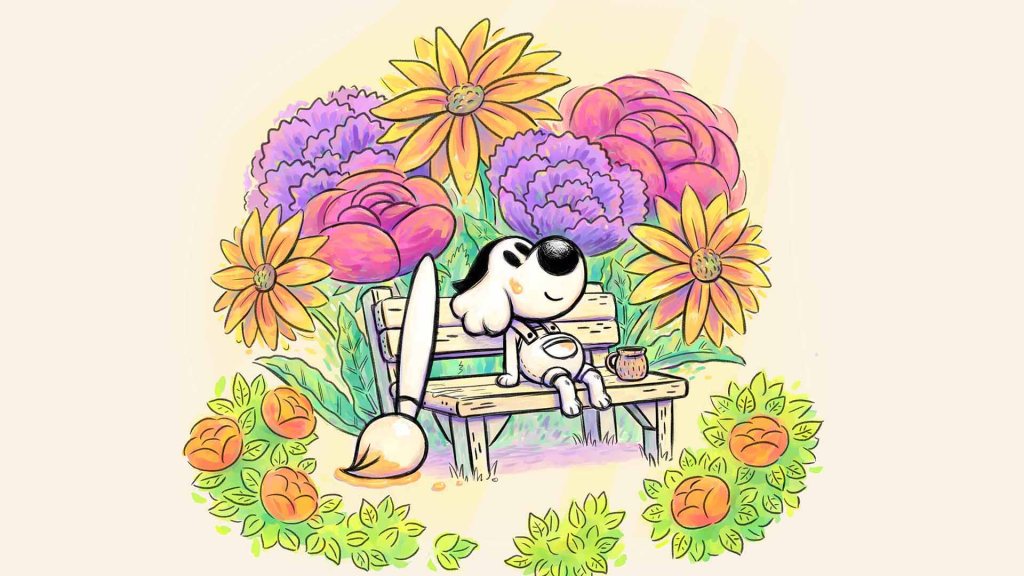 The Nintendo Switch library is filled with warm, wholesome experiences that wrap you up in relaxing vibes. From epic culinary adventures to explorations of mental health and wellbeing, there are so many incredible adventures on the platform – too many to be contained in a single list.

While we’ve already taken you through the most relaxing and cosy games on Nintendo Switch before (check out the original list below), there are so many games with good vibes available on the console, that we’d love to share more.

If you’ve already breezed through the games on our first list, here are a few more of the best cosy and relaxing games for Nintendo Switch.

Epic Chef is a life simulator where you play a young sailor who inherits the deed to an abandoned house on the outskirts of a secretive town. Everyone tells you the house is haunted – but as you explore more of your surroundings and dive deeper into your new life, you’ll uncover its mysteries, as well as a new life as a gourmet chef.

As with other life simulators, you can roam around this game collecting ingredients, planting crops and interacting with townsfolk – but with each quest driven by unique goals, and an ever-unfolding world that reveals new ingredients and secrets the more you explore, it’s a fantastic experience that comes close to the heights of Stardew Valley and Story of Seasons.

While it takes some time to get used to the adventure’s blocky, Minecraft-like aesthetic, you’ll find a cosy and wholesome simulator if you give this game room to grow.

Yoshi’s Crafted World isn’t a traditional wholesome game, in that it’s actually an action platformer where Yoshi travels through a dangerous world littered with puzzles and enemies, but it can still be regarded as extremely cosy thanks to its entire aesthetic. As Yoshi travels through each of this game’s many worlds, you’ll notice something strange: that every part of this Nintendo Switch exclusive is designed to look ‘constructed’.

Some platforms are made up of shiny ribbon tape. Tree stumps are flattened toilet rolls. Most enemies appear to be created from some form of clay, and bottle caps stand in for springy obstacles. In short: the game’s world is a pure delight, filled with familiar shapes that add to its charms. It’s wonderful to wander through a grassy paddock and see fish made of aluminium foil, or clouds that look to be made of cotton buds.

While you can technically die in this adventure, the game’s action is very forgiving, making wandering the world and gazing at every installation a viable path for players. You can also turn on special modes to make it easier for you, meaning you can play through this entire adventure just vibing with the gorgeous scenery.

Chicory: A Colorful Tale isn’t just a charming, storybook-like adventure – it’s an exploration of mental health, and how depression can make the world feel leeched of colour. In this tale, you play as an adorable dog with the default name ‘Pizza’. Every character in Pizza’s world is named after food, and they’re all just as cute as each other. But while everything seems calm on the surface, it isn’t long before the peace of Pizza’s town is interrupted by the sadness of the current magic paintbrush Wielder, who brings life to the world of the game.

With the Wielder indisposed, Pizza chooses to take the reins and spread joy wherever they roam, by creating rudimentary artworks and painting in trees and landscapes. As Pizza, you can scribble on any part of the screen to create your own work of art, as well as fill in great landscapes, and solve puzzles by painting various parts of the environment.

While some puzzles in this game are particularly challenging, the main thrust of gameplay is wholesome and extremely heart-warming. Pizza makes for a loveable protagonist, and the tale Chicory tells about living up to expectations feels so needed.

Gorogoa is a picture book-style game where players must use environmental clues to solve puzzles, and advance the game’s dialogue-free story about a young boy making his way through an ancient and mysterious world. Puzzles are solved at your pace, with each requiring a certain amount of thinking between moves. In each scene, you’re presented with one to four panels, which can be interacted with by clicking or swiping – with each movement causing a knock-on effect. Like a jigsaw puzzle, you can place scenes together and watch how they interact.

If you push a crow into the right spot, and a bowl beneath the apple tree, you’ll be able to grab the apple to use later, with the gorgeous animations depicting each milestone in your adventure. There are points in Gorogoa where you may need a guide to get you through, but that doesn’t take away from the soft and intricate vibes of this experience.

There’s no game quite like Gorogoa out there – it’s rare to see a game so unique. Every aspect of this title has been lovingly crafted, with each puzzle contributing to the game’s breath-taking sense of beauty. It will leave you scratching your head, but Gorogoa‘s unique gameplay makes the entire journey worthwhile. On Nintendo Switch, the touch-based experience is also grand.

New Pokemon Snap is a short gaming experience – but one that is aggressively cute at every turn. You play this game as a Pokemon photographer who travels through wild environments on a mine cart-like vehicle. There’s no combat, and no real puzzles. Instead, your job is to swivel your head, aim your camera, and take photos of Pokemon in their natural environment. Sometimes, you’ll be able to catch a tired little yawn, other times you’ll need to throw special items to get the Pokemon to perk up and say hello.

There are several environments to run through, including night-time versions with new Pokemon and interactions, and each biome glistens with colour and charm. On the ocean, you’ll find unique water-type Pokemon. In the grassy fields, you’ll run into flying and grass-types, including friends like Grookey and Pichu.

Very few wholesome games let you sit back and just enjoy the scenery, but that’s exactly what this Nintendo Switch exclusive is all about. You may miss certain Pokemon on your first few adventures, but even the ‘grind’ of repeating levels is satisfying, with new sights to find on every fresh trip. Even if you’re taking photos of the same Pichu again and again, there’s so much wholesomeness to be found here.

Spiritfarer is a cosy and wholesome game where players must take creatures to the afterlife on a magical boat. While the subject matter is fairly sensitive, and does get quite deep on occasion, Spiritfarer remains a cosy game that really stokes the fires of emotion. You play as Stella, a young girl who takes over from mythological ferryman Charon, and is tasked with granting the last wishes of the dead to help them find peace.

Charming characters litter this adventure, with each soul you meet making a major impact. While the sorrow tied to their deaths is hard to avoid, the cosy feeling you get from fulfilling their wishes and sending them on is as uplifting as it is sad. Every soul has a story, and it’s well worth sitting down and sharing in their tales.

Using elements of life simulator games (collecting materials, upgrading boats, creating gardens), Spiritfarer effectively creates something brand new in the genre – a game that focuses on story, as well as cosy feelings. This game lingers long after you’ve completed it, and will certainly keep you thinking.

Littlewood is a pixellated life simulator that takes place in the wake of a great war. Your town has been saved from a great evil, and now it’s your job to pick up the pieces and rebuild following a disaster. In the early stages of the game, you’ll be inviting new folks into town and building houses for them. Once these folks are established, you’ll set to work on creating an economy, and decorating the town with pretty flowers, found in low-stakes fights in nearby forests.

There is an action element to Littlewood, in that the creepy woods contain strange beasts alongside every material you need for building new houses and furniture, but these battles are fairly small and never present much of a risk. In lieu of death-defying feats, your hero can simply wander of their own accord and carve out a well-earned life of peace and comfort.

You can spend hundreds of hours with Littlewood if you choose, with various activities and interactions keeping the action going. You can romance the townsfolk through cute little compliments and dates, or you can hop into the local coffee shop to enjoy a quiet moment. The looseness of the game may deter players who enjoy structure, but the game’s freeform quests are more than enough to keep the story humming along.

Toem is another photography-based game – but one with a stylish action element. You play as a worm-like character who sets off to explore unique locales and experience a magical phenomenon known as TOEM. Along your journey, you’ll receive a number of requests from townsfolk who want you to take photos of particular scenes or characters.

One person may request a photograph of a flying bird. Another may request you find several walls that have been graffitied. Each demand then leads to a Where’s Wally?-style hunt through various black-and-white landscapes, all of which hide weird little secrets. In an alley, you may find bandits wrecking the walls. On a dam, you may spot an unfortunate citizen caught in the water. Photograph them, and you can advance your story.

The world of Toem is frankly beautiful, with the game’s 2D-3D artwork making it a stylish success. Gameplay is also extremely fun, with each photograph requiring player thought, puzzling, and plenty of patience. Some secrets only reveal themselves after some time, making Toem a real exercise in becoming zen. From its primary mechanics to its art style, Toem simply oozes cosy game vibes.

The Nintendo Switch game library is filled with cosy, wholesome and incredible video games, from simple adventures to complex action platformers. While tastes will vary, there’s always something for everyone waiting on the handheld console.