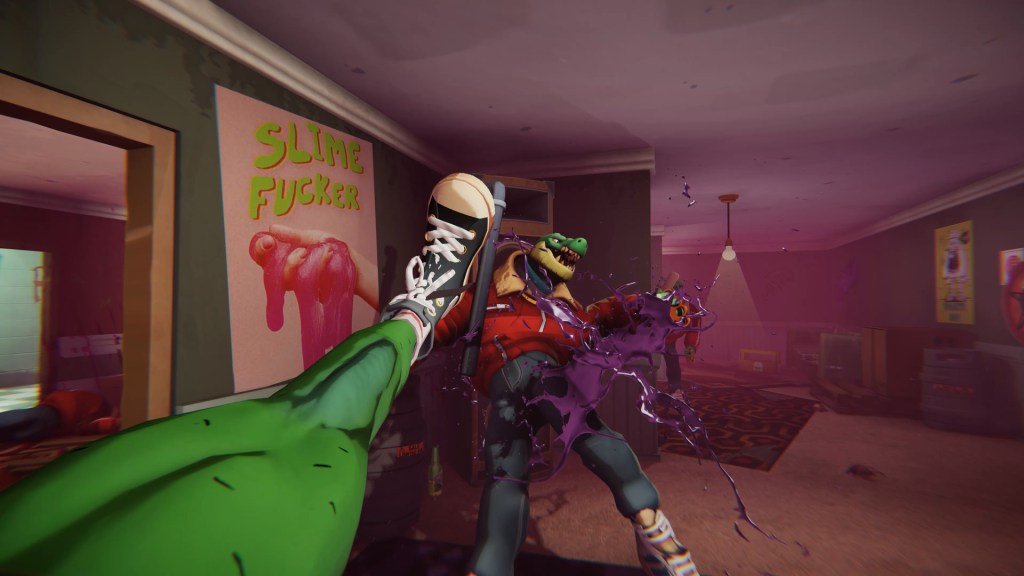 Devolver Digital has a history of publishing wild and weird hits, with a recent string of successes bolstering the company’s reputation for wonderful strangeness. Upcoming game Anger Foot is, by name and gameplay, instantly recognisable as another entry in the odd Devolver canon, with developer Free Lives embracing the strange for its breakneck, door-smashing action combat sim.

At PAX Aus 2022, I was able to get hands-on with this upcoming adventure – and while I failed missions more than I succeeded, it was certainly an eye-opening experience that left me longing for more deranged, foot-stomping goodness.

In Anger Foot, you embody a rogue vigilante storming their way through the streets and houses of Shit City (yes, really) on a mission. While the demo provided at PAX Aus didn’t have much context for these tasks, it hardly mattered. The kick-heavy, frenetic gameplay spoke for itself – loudly, abrasively, obnoxiously, and gloriously.

The action of Anger Foot is split into multiple chapters, where players are dropped into a variety of locales, and unleashed on suspecting goons. There’s a simplicity to the gameplay loop – break open a door, take on a group of thugs, stomp to the next cluster, rinse and repeat. Once you make your way through each location, you’ll eventually stumble onto a staircase landing that will transport you to the next mission drop.

To literally kick off the action, you only have access to one weapon – your deadly, flying feet. They can smash through doors and walls, and knock enemies completely unconscious, sending them flying backwards with unbelievable speed. Kick them hard enough, and you’ll knock them clean through walls – or into other enemies, who’ll also keel over into the land of dreams.

Backed by a pumping, hard beat soundtrack, the action of Anger Foot fuels you forward, encouraging greater exploration, more effective tactics, and mastering the element of surprise. Your gangly, large-legged protagonist has an excruciatingly small health bar, which means you can’t allow yourself to be too caught up in your own momentum. Instead, you’ll need to scrape back time with clever instincts and strategy.

Anger Foot advances at frazzling speed, but you need to plan before you move – analysing attack patterns, noting where enemies are located in each space, and pre-preparing how to spend bullets when you eventually nab a gun. Going full speed ahead, motivated by the sound of thumping grunge is an instant ticket to death, but playing and replaying stages means you can eventually work out the most tactically advantageous moves.

Take off on a massive run, kick down doors, locate enemies, take them out. Be surprised, and end up dead. Then start your run again, finding new paths, and discovering where exactly that one pesky enemy is hiding. Take them out, run a bit further. Die again. Find who did it. Stride forth into glory.

Each loop, you advance further into your mission, driven by fury, pride and a sense of determination. What should be a simple mission of violence quickly becomes personal, emotions charged by unfair enemy mobbing, and attacks that come out of nowhere.

Anger Foot is a name that quickly makes sense – it’s a name you feel as you play.

As the game preview for Anger Foot advanced, I eventually found my groove in a balance between waiting and stealth, and running into rooms all feet blazing. The game encourages rapid-fire blasts of speed and no-holds barred attacks, with even the pace of walking being fast and frenetic, but restraint often comes in handy as you size up your locale and enemy goons.

Sometimes being effective means stowing your feet, or waiting with bated breath around corners. Other times, it means shoving every single toe through a cracked bathroom door, stumbling onto a goon just using the loo, and punching him out as he tries to pull up his pants.

That’s Anger Foot in a nutshell.

It’s a balls-to-the-wall, neon-infused nightmare filled with absurdism, toilet humour, and plenty of bloodshed. It’s a rare experience that feels wholly unique. It aims to be different. Weird. Wonderful. It’s determined to carve out its own (frankly insane) path in the world of video games.

With Devolver Digital’s blessing, it’s likely to succeed in its goals.

Free Lives has something unique and ridiculous on its hands. Anger Foot is a game that demands to be played, and grabs your entire attention with both hands and both feet. If you’re keen to experience the high-speed, foot-wielding terror for yourself, there’s is currently Anger Foot demo on Steam that is deliciously mad and must-play.