Tunic is an adventure crafted with care and consideration, with a charming world that promotes a satisfying sense of self-discovery.
Christie McQualter 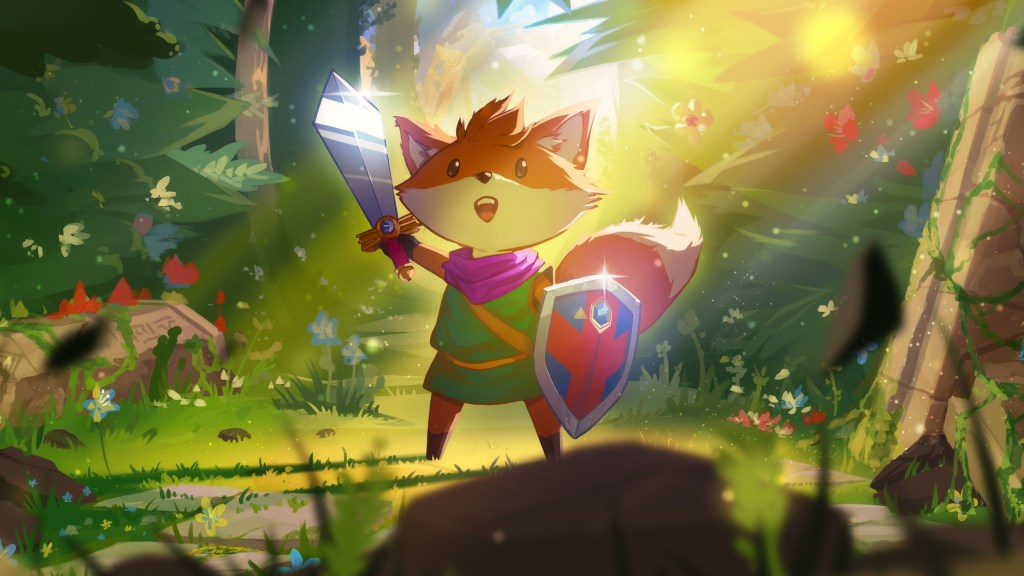 Moss-covered ruins project from the surface of bright, blue water. Dappled sunlight cascades down onto the forest floor, forming patterns that shift and swirl before your eyes. Intricately layered cliffside pathways meander down to isolated sandy beaches. Everything about the enchanting, low-poly art style of Tunic invites you to dive in and immerse yourself in its world. Even better still, it has the depth to keep you captivated until you’ve uncovered every little secret it has to offer.

In this isometric action-adventure by solo developer Andrew Shouldice, you play as a little fox dressed in a green tunic. There isn’t any characterisation or context beyond this – but Tunic isn’t really about who the fox is; rather, it’s about where you will go.

Tunic is all about the journey

Tunic has a strong focus on exploration and discovery, and the lack of a complex opening narrative cutscene is refreshing. Your adventure takes you through deep forests, snow-capped mountains, ancient ruins and everything in between, hitting all the typical adventure game locations.

The thing that’s atypical is that Tunic’s journey is non-linear. There are a few hints here and there about where to go, but no explicit instructions to follow. This might sound daunting – and yes, the game certainly doesn’t hold your hand – but for the most part, its progression design still feels fluid and enjoyable.

There are hints at an ancient secret hidden all over the island, and the morsels of that mystery are what pull you through your adventure. Each small area you explore, or tool that you find, contributes to the completion of an overall objective … even if you aren’t exactly sure what that objective is.

Often the goal is utility-based: finding a sword to cut down bushes blocking your path in one area, or obtaining a magical grappling hook to pull you to an unreachable ledge in another. Finding one of these items and recalling somewhere you’ve previously visited where it can be used is its own satisfying achievement.

As you progress, you’ll collect odd pages from an instruction manual that contains lore, maps, and explanations of key gameplay mechanics. Usually, you’ve long worked these things out yourself before receiving the pages, but it’s helpful to have confirmation in the form of nicely illustrated pages you can refer back to, and it doesn’t take away from allowing you to discover things for yourself.

Tunic also makes effective use of its isometric viewpoint to create a sense of mystery and intrigue. More than just an aesthetic choice, it uses its locked camera perspective to create puzzles. You need to stay vigilant to uncover the full array of what Tunic is hiding, checking for doors and ladders tucked behind corners. It’s this style of thoughtful game design – with just the right balance of challenge and reward for your curiosity – that makes you feel clever and accomplished.

It’s satisfying to spy an item on a ledge below you and wonder how you’ll reach it, only to walk behind a waterfall a few hours later and find yourself back in the same location, looking out from a different perspective.. Everything in Tunic’s world feels meticulously crafted, with no bridge or staircase being placed without intention. The more you get to know the labyrinthine map, the more shortcuts you discover and the greater your understanding of how each part of the island links together.

The idea of a Metroidvania quickly sprung to mind as I explored Tunic’s huge, interconnected map full of varied environments and tough enemies. It’s a game that wants you to fully engage with its world, and it’s important to maintain a mental map to keep track of where you’ve been, lest you end up lost in a dark cave full of skeleton bats with no idea how to get back to safety. Mini map pages appear in your manual after you’ve explored an area, but they are simplified representations of the landscape, so you can still overlook sections if you aren’t careful. I found it helpful to leave a trail of breadcrumbs by cutting grass with my sword, which the game thankfully encouraged – since areas don’t reset, the cut patches were useful cues to remind me of where I’d been.

Combat is tough, but accessible

Despite its cute exterior, the game’s combat can be tricky at times, even when you’re only facing a group of smaller enemies. You face a variety of adversaries on your journey, including tough boss encounters.

Tunic incorporates some Dark Souls-like elements into its combat – if defeated, you’re sent back to the last savepoint you activated, and you need to make your way back to where you died to retrieve your coins. These savepoints also restore your health while saving your game, but at the price of respawning all the enemies on the map. You need to effectively manage your health and magic levels to prevent the need to run to a savepoint frequently, otherwise you end up fighting the same goons on repeat.

There’s a nice sense of risk and reward there, but it began to feel repetitive after a while, so I was pleased to stumble upon a ‘no fail mode’ among the accessibility settings. When this is enabled, the game is functionally the same, but if you fall in combat you hop right back up again, instead of respawning at a savepoint.

What’s impressive is that this doesn’t remove all of the challenge from Tunic or completely dilute the quality of the experience. It lessens the punishment from falling in combat, but it isn’t an instant win card because you still need to implement what you know about unique enemy types to take them down. This eases the burden of combat-heavy sections, ultimately making it feel like a more approachable game.

And of course, there’s still the delicious challenge of exploring the map and uncovering its mysteries. I was drawn more to this side of Tunic because it was comforting, so I switched the no fail mode on and off throughout my playthrough depending on what I was doing. Whether this feature helps someone living with disability or someone with limited time to replay fights until victory, it’s encouraging to see it implemented so fluidly

Tunic is an adventure that’s crafted with care and consideration, with a beautifully detailed, charming, and challenging world. Whether you’re looking for some cosy exploration, or to hack-and-slash through hordes of enemies, the world of Tunic is a lovely place to do it in.

The PC version of TUNIC was provided and played for the purposes of this review.