Behind the quirky facade of The Good Life hides a playful existential exploration of the complexities of human life.
Christie McQualter 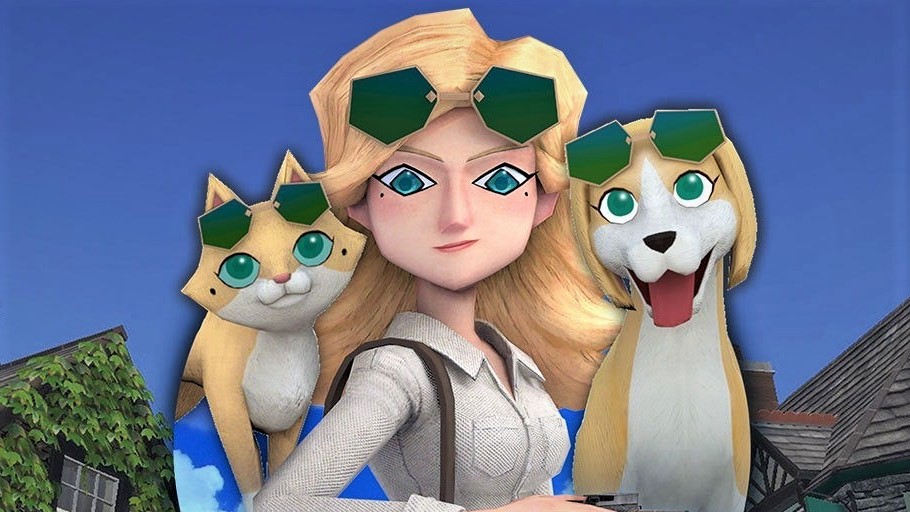 When developers White Owls Inc. pitched their latest release, The Good Life, as a ‘debt repayment RPG’, they were knowingly underselling one of the zaniest video game experience of 2021. From the mind of Hidetaka ‘SWERY’ Suehiro (Deadly Premonition) comes a complex action-adventure RPG full of mystery, shapeshifting, and sheep wrangling that leaves you questioning your very existence.

Journalist and pro photographer Naomi Hayward is deeply in debt in The Good Life – thirty million pounds deep to be exact. In order to clear this insurmountable figure, she’s been sent away from her big-city life in New York to a small English town called Rainy Woods on an assignment for The Morning Bell newspaper. Rainy Woods is touted as ‘the happiest town in the world’, and her corporate overlords want the scoop on why exactly that is.

If you ask Naomi, she’ll tell you it’s a ‘goddamn hellhole’, which quickly becomes her catchphrase. But much like any other town tucked away in the English countryside, Rainy Woods really is peaceful and picturesque. Free from the hustle and bustle, it’s the perfect place to live a good life.

At least, that’s what they want you to think.

Naomi soon discovers that the townspeople moonlight – quite literally – as cats and dogs. When the sun goes down, they transfigure into a feline or canine form, only to return to their human form by morning and act like nothing happened. As if things couldn’t get any weirder, the mystery of the town’s reputation for happiness takes a backseat when Naomi finds herself wrapped up in a murder investigation, and suddenly able to transform into a cat or dog herself.

What could have been a run-of-the-mill detective game is totally shaken up by the addition of these playful shape-shifting powers. White Owls show no animal favouritism, giving each species transformation-appropriate abilities akin to that of their real-life counterparts. Cat form gives you hunting and wall climbing abilities, while dog form allows you to track scents, dig for loot in trash cans and mark your territory. Shapeshifting features heavily in the main story and side quests, with the abilities of one form often being a requirement to progress.

The result feels like a fresh take on the genre. White Owls veers away from dark, gritty aesthetics and heavy plotlines, and instead approaches the genre with its own brand of offbeat humour and experimentation with unconventional mystery-solving mechanics.

It’s delightful, so much so that I was often losing myself while exploring from an animal’s perspective. Running through the countryside as a dog, ears flapping in the wind and tail wagging, with a cheerful soundtrack playing in the background, is an unexpected delight.

In contrast to the shambles that is Naomi’s human life, the simplicity of playing as an animal and shrugging off all responsibility makes you question why humans choose to complicate life so much. In the face of such an impossibly large debt, why doesn’t Naomi just turn into a dog and run away? Being an animal removes the need for money, for the structures of human society in general, and brings self-sufficiency.

Yet fleeing from her human problems would leave Naomi without some of the key things that represent a ‘good life’, such as friendship, community or the career that she’s worked so hard to attain.

Though The Good Life draws no specific conclusions about why Rainy Woods is the happiest town in the world, perhaps the townspeople having this insight has something to do with it.

The inhabitants of Rainy Woods are all appropriately eccentric for a SWERY game. For example, there’s Norlock Homeless, the Sherlock Holmes wannabe with a parrot named Watson that can only say ‘fish and chips’. There’s also Lonette Burley, the scantily clad farmer with a no-bullshit attitude and superhuman strength in one arm. It’s novel seeing how the character design matches up with each distinct personality and subsequently what breed of cat or dog they turn into at night.

They are all fairly one-dimensional characters, but essential contributors to the game’s exploration of what constitutes a good life. Rainy Woods – the happiest town in the world – is the sum total of each individual’s idiosyncrasies.

Where Naomi is driven only by her motivation to be free of debt, the townspeople are seemingly oblivious to such problems, happily living their small-town lives. They welcome her into the community. They encourage her to share in their interests – like ‘sheepmanship’, the absurd art of taming sheep to become your noble ‘shteed’. They add playfulness to daily life, showing her how not to take it so seriously.

Naomi, for all her selfish intent, is made more likeable by her interactions with them and her reactions to the ridiculous situations they put her in.

Naomi voices her frustration at the townspeople – often echoing your own frustrations – when they avoid her questions or send her on irrelevant fetch quests, thwarting her efforts to find newsworthy material.

The Good Life is heavy on self-referential humour, regularly having Naomi comment on feeling like she’s in an ‘old, decrepit RPG’ or accusing the townsfolk of giving her side quests as ‘padding’. It’s clever and amusing, though it becomes tiresome by the later stages of the game when you’ve heard the same joke many times over.

On more than one occasion, the ridiculousness of the tasks you’re undertaking make you question why you’re still playing, and the game’s self-awareness adds to the effect here. It can trigger a sense of existentialism – Why am I still playing if these characters and the developers who created them are just messing with me? It’s a mirror that can be difficult to continue gazing into. Nevertheless, with the care that has gone into making The Good Life – with its wacky characters, plot lines and mechanics – it’s oddly difficult to put down without reaching its ludicrous conclusion.

The Good Life is more about the journey than the destination, though. It may not directly explain what it takes to live a good life, but it’s a playful and unique exploration of some possible answers to that question. It holds up a mirror, leading you to question your own ideas about the importance of money, community and friendship – or perhaps just to question why you’re even playing at all.

The Nintendo Switch version of The Good Life was provided and played for the purposes of this review.