Between the naturalistic traversal, the aloof nature of your protagonist, and the little details, Stray gets so much right about being a cat.
David Wildgoose 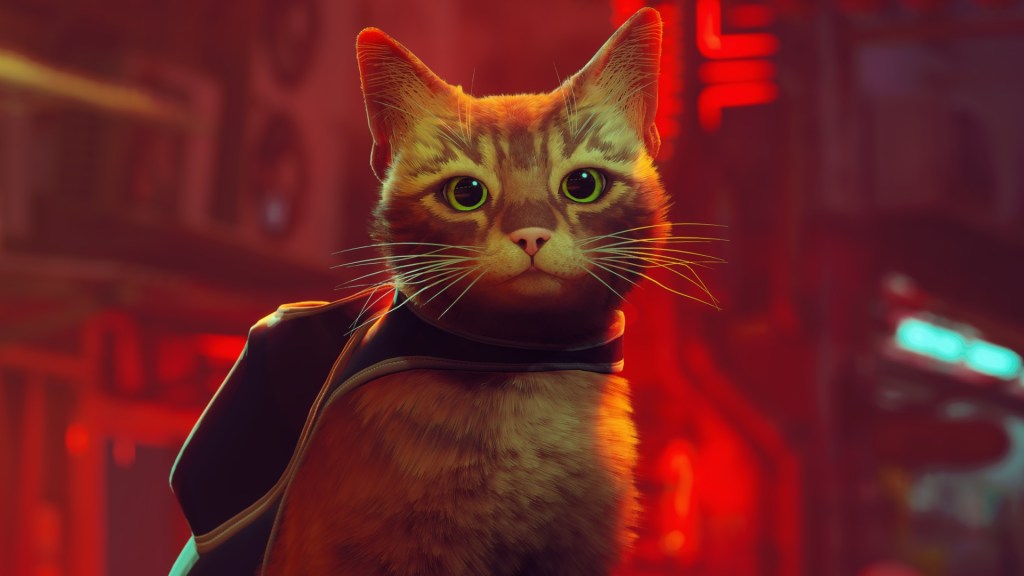 Cats are often portrayed as aloof. As a lifelong cat companion, I know that sometimes their behaviour is readily understood. That late afternoon emergence to sit on my desk and stare is a sure sign she’s hungry and expects dinner to be served imminently. The insistent mid-morning mewling, however, is an invitation to play, any standoffishness shrugged aside in favour of alternately flopping on the floor and chasing my feet. It’s hard to put on airs when you’re wriggling across the floor, belly up.

Yet cats are often as inscrutable as the common depiction suggests. As I write this, one of the two cats with whom I share this apartment is sitting on the floor across the room from me, legs tucked under her body in the loaf position, looking dispassionately at me when her eyes aren’t half-closed. When I get up to leave momentarily, she’ll watch me exit and re-enter the room, unmoving except for those two green spheres shifting as I come and go. When I stop to give her a scratch behind the ear, she’ll tilt her head to accept the touch then tilt it back when I withdraw my hand. And so the vigil resumes.

We project much onto these stoic, poker-faced creatures. We interpret deep personality traits from the merest glance and imbue minor gestures with character-defining significance. Cats can seem aloof because they don’t give us much to go on. At heart, they’re actually pretty simple. It’s lovely to think that she’s come to snuggle on your lap at the end of a long day because she understands you need to feel comforted, but honestly, it’s probably just nice and warm there.

As a game with a feline protagonist, Stray gets a lot right about being a cat. It feels good to move through the world, whether slow-walking warily, determinedly picking up the pace into a steady trot, or breaking out into a full sprint when you realise you’ve got to be somewhere else right this second.

Perhaps oddly, there’s no dedicated jump button. A prompt will appear when you’re near a ledge you can leap up to or above surface you can drop down to; tapping this button in these moments will perform a jump while holding it down lets you move quickly across a series of such ledges. Not being able to jump at will feels limiting at first, but that feeling soon subsides as you start to appreciate the benefit of navigating in a tightly defined manner. You’re never leaping around like mad as you try to find a way onto that roof, never pushing in vain at the limits of the world to find the route. Traversal feels precise and naturalistic as a result, an appropriate collision of form and function, full of finesse just as you’d expect from a cat.

Separated early on from a trio of fellow cats, you find yourself astray, solitarily exploring a post-apocalyptic world that apparently once catered to human life, yet no longer seems to. It’s a stunning world, too. The opening sewers, overgrown with wild vegetation through disuse, segue into a dense urban landscape that’s all twisting alleyways and makeshift bridges from one roof to the next. Later areas reveal more of the likely cause of human absence and veer into more unsettling and unpleasant territory. As a portrait of societal collapse, the detail in every scene is extraordinary and the lighting impeccable, whether in the contrast between light and dark or the use of colour to highlight and draw the eye to particular points of interest.

The camera work in Stray accentuates the feeling of being a cat and the scale of the ruined civilisation. Low to the ground, the camera scurries after you as you dart down an alley, slink underneath a street cart, and pounce onto the counter of a ramen shop. Everything appears enormous around you, an aspect further emphasised by the low-slung camera. It’s not just the buildings that tower above you either. For the most part, the only other beings you encounter are human-sized robots, their lean-limbed physiques looming over you not in a threatening manner – they’re friendly robots – but more as a constant reminder that this world wasn’t designed for a creature of your stature.

In some ways that’s to your advantage. As a cat, you can get into places that others can’t. Much of your time is spent exploring each area and working out how to get where you need to go. Sometimes this is a simple case of poking around until you find the correct route. Other times there are puzzles to solve, typically finding the right item to deliver to someone or figuring out how to unlock or bypass a door. Here you enlist the help of an AI companion who travels with you inside a small robot and can miraculously communicate with you. Or perhaps it speaks to you, the player, and the cat doesn’t understand? It’s not entirely clear on this point.

Either way, it helpfully overcomes the potential problem that a cat can’t speak, and offers a mechanism for verbally delivering aspects of the story. The AI also enables you to interact with various computer interfaces in a way that a cat cannot, though there are a couple of instances where this relationship is upended in amusing and clever fashion.

For the most part, I really enjoyed finding my way through the world. Making sense of the location you’re in, especially the two large urban areas where you’ll spend the most time, eventually realising how the various passageways connect both horizontally and vertically, and all the little shortcuts you can take in between, is a satisfying puzzle in itself.

The extra layer of more overt puzzles – seriously, some of these feel like they’ve fallen out of an old point-and-click adventure – felt tedious in comparison. There’s an over-reliance on finding keys to locked doors and not enough use of a cat’s natural talents. At times, the puzzles feel like they use the AI companion as a crutch to lean on more traditional and sadly unimaginative video game obstacles.

Why am I trying to figure out the passcode to this safe? I’m a cat.

There are also mixed results when more urgent action is demanded. The primary enemy throughout Stray comes in the form of the Zurk, a small but nasty critter that tends to arrive in shrieking clusters that vaguely resemble the Flood from Halo. Initial encounters with the Zurk require only that you run; if they catch up they’ll attach themselves to you and you’ve got a few seconds to frantically mash buttons until they drop off. There’s a certain thrill to these chases, but they’re ultimately trial-and-error sequences that you’ll dread after experiencing the first one.

Later you gain the ability to fight back, and the handful of subsequent meetings with the Zurk are trivialised. I suspect they’re meant to be suspenseful, and intended to make you feel like you’re surviving by the skin of your teeth. But they’re a walk in the park.

More successful are the couple of areas that necessitate using stealth to bypass some patrolling security, a feat due to the fact you’re urged to study the environment and determine the best path through – the undoubted core strength of the entire game.

Stray gets so much right about being a cat. It’s not just the way you travel through the world. There are moments when you stop to rub your side against someone’s legs. You can press a button to scratch the carpet and there are even a couple of puzzles that make smart use of this ability. The way you stretch out one paw to tentatively bat at a suspicious object or how you curl up on a cushion in the perfect pretzel… it’s just so exquisitely, believably cat-like.

But Stray slips when it’s less about being a cat. It’s not just the puzzles that seem designed more for the AI robot than your feline self. The cat you’re playing as – indeed, cats in general – are weirdly sidelined in the grand scheme of things. There is genuine mystery as to how the game’s world ended up like this, but it feels like you’re not experiencing the most interesting version of that story.

It’s ultimately a tale about human beings and their robot creations, and this stray cat just sort of wanders through it, triggering pivotal events and drawing characters together, yet still remaining separate from it. In the end, it doesn’t particularly have much to do with you. You remain at a distance, indifferent, aloof, and in this sense maybe it’s the ideal cat tale.

The PC version of Stray was provided and played for the purposes of this review.