Spelljammer: Adventures in Space is out of this world

Spelljammer: Adventures in Space doesn't take itself too seriously, and is all the better for it.
Emily Spindler 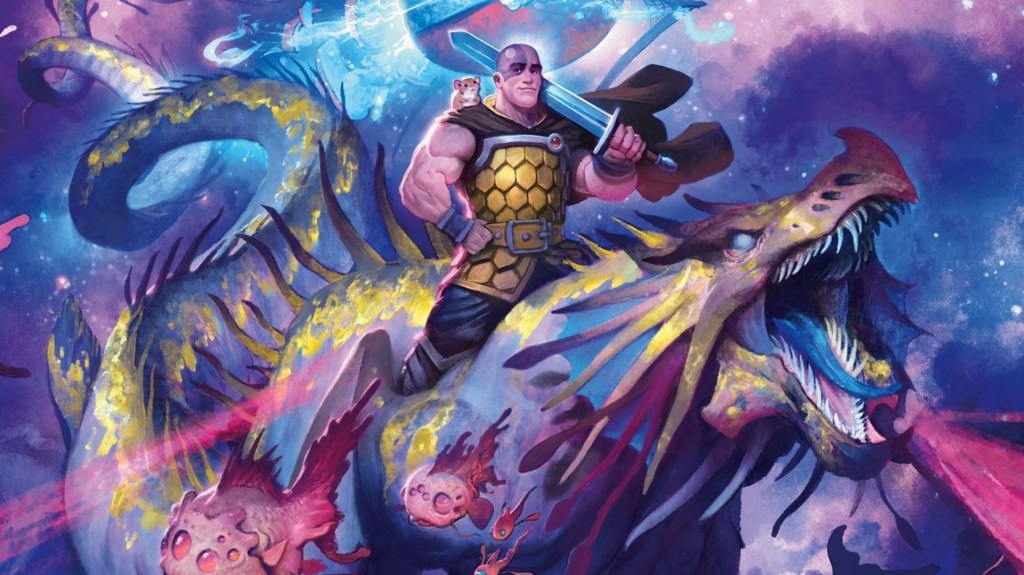 Spelljammer: Adventures in Space can be boiled down to one sentence, oft-repeated during a recent game I was invited to play: space is cool. Whales fly through the Astral Sea, and sentient oozes gear up for war, all while you sit on a Spelljamming Helm, directing ships through the cosmos.

The new Dungeons & Dragons set is compiled of a DM screen and three 64-page hardcover books, including Boo’s Astral Menagerie, a compilation of the sometimes horrifying, sometimes whacky creatures that you may encounter in your space adventures. There’s also the Astral Adventurer’s Guide, containing new player character options such as the amoeba-like Plasmoids, as well as a comprehensive overview of sixteen ships you can explore. Bringing together the resources of these two books is Light of Xaryxis, a short 12-chapter adventure that serves as a zany entry point into the world of Spelljammer.

While all three books together are about the same length as a standard adventure expansion, splitting them into separate hardcovers based on rules, creatures, and the adventure itself is a welcome move that makes things a lot simpler both for DMs and players. It removes the constant flipping back and forth between pages to find stat blocks for enemies, which can sometimes all but kill a tense moment mid-game.

The Spelljammer setting, originally released in 1989, has been revamped for 5th edition D&D, all the while retaining the eccentric and often comedic heart of the original (which takes heavy inspiration from Flash Gordon). The flavour text introducing the Giff, a race of hippo-like creatures, explains that there is an internal dispute about the pronunciation of their name, humorously referencing the ‘gif of jif’ debate ongoing in internet culture. The ability for Spelljammer to not take itself too seriously, even in the source books, sets the tone for your space adventures. Of course, D&D has always lent itself quite equally to both comedic bits that have the whole party in stitches, but also introspective, emotional adventures that you leave the session pondering for some time after.

In my recent playthrough of the first few chapters of Light of Xaryxis though, I got to experience firsthand just how fun taking things a bit less seriously can be. During a particularly tricky fight, we found ourselves against a ship of astral elves, with the strongest enemy atop the mast of our ship. With a bit of panicked quick thinking, our sorcerer cast Enlarge on my barbarian, and rather than continue to throw our whole arsenal of spells and weapons at them, I was able to climb the mast King Kong style and unceremoniously throw our foe as far as possible into Wild Space. Beyond a strength check to grapple them, our DM graciously employed what I’ve always referred to as the ‘rule of cool’, allowing this with minimal agonising over rolls or rules.

Spelljammer itself is light on new rules, with only about ten of the 64 pages in the Astral Adventurer’s guide dedicated to mechanics (not taking into account the thirty pages deep-diving into each of the ships players may come across, or character customisation options). There’s a surprisingly small section on ship-to-ship combat despite a large portion of the adventure taking place on one of the many ships described in the books, instead favouring players getting within melee distance of opponents as quickly as possible to allow for their own abilities to shine through. I personally welcome the encouragement for more traditional combat, as while shooting a ballista into a ship is fun the first few times, it certainly doesn’t beat the tried and tested player combat system currently in place.

While the lack of rules isn’t inherently a bad thing, it does certainly feel like there’s something missing in the new Spelljammer set. The original Spelljammer setting is expansive and so left-of-field from traditional swords-and-sorcery style D&D that it seems like it could be an entirely different TTRPG in its own right. 192 pages across the three books doesn’t feel like it comes close enough to summing up the cosmos, and all of the concepts and mechanics that go with it. While that does leave plenty for the imagination (or for a deep dive into a fan Wiki), it does feel like Wizards of the Coast either isn’t quite done with Spelljammer, or shouldn’t be.

Despite this, some (intentional and unintentional) omissions, like the removal of concepts like the phlogiston (the flammable substance between worlds that players travel on) aren’t all bad. The phlogiston has been replaced by the Astral Sea, a move that brings Spelljammer more in line with current D&D lore and makes it feel more comfortably a part of the world that players are familiar with, while still remaining unique enough to be exciting and fresh.

Spelljammer: Adventures in Space promises a ‘rollicking space adventure’, and it definitely delivers on that promise. The campaign setting and adventure pays homage to the original, taking the best parts and updating them for a 5e player base. Much like our exploration of real-world space, Wizards of the Coast have only scratched the surface of what’s out there in the stars. Space is cool, but it’s also the perfect place for an outlandish adventure with lots of humor, intrigue and good old swashbuckling, albeit cosmic style.

GamesHub was invited to a Wizards of the Coast-curated session of Spelljammer: Adventures in Space for the purposes of this review.