Blending humour six years past its prime with combat you’ve played before, Shadow Warrior 3 trims the fun, instead of trimming the fat.
Nicholas Kennedy 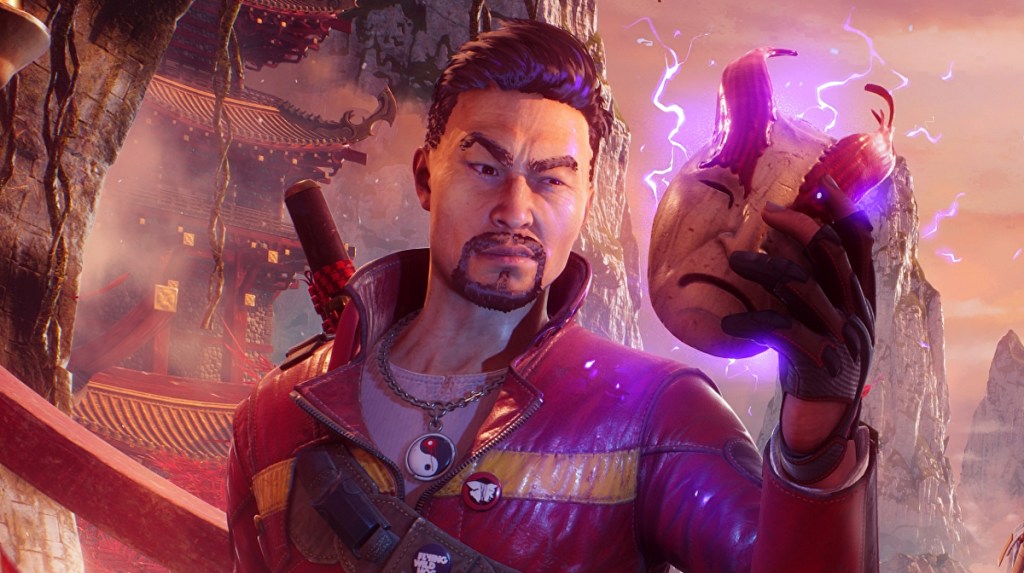 The Shadow Warrior Lo Wang’s life goes by as a blur. Step into the stream of his consciousness and you’ll be coated with dragon guts, dance among demon viscera, dispatch endless bullets and steep yourself in a kind of pop culture miasma that reached its zenith with 2016’s Deadpool.

Shadow Warrior 3 remains in a happy state of arrested development, stuck in a media moment of super hero irreverence and fart jokes. Attempts to ‘modernise’ or gussy up the story (which follows on directly from the previous entry) with improved characterisation or a deeper look at key players, like billionaire villain turned ally Orochi Zilla, are entirely hollow, and its nine hour runtime feels more like a rushed closing chapter to a broader, vaguer story than a short and sweet bullet storm, like its first person shooter contemporaries.

For a game promising all-out action and subversive adventure, Shadow Warrior 3 is the most constrained and restricted shooter I’ve played in years.

Paring itself down from the RPG-lite frills of Shadow Warrior 2, a game replete with transferable weapon power-ups, enemy health bars and optional missions, Shadow Warrior 3 emerges from its diligent note-taking during the recent ‘Doomassiance’ by directly attempting to ape the structure, gameplay loop and progression systems present in both 2016’s Doom and 2020’s Doom Eternal.

However, while Shadow Warrior 3 seeks to efficiently trim the series down to a state as razor sharp as a katana, it instead ends up feeling like a slice of life out of a more interesting, expansive game. I never thought I would describe an apocalyptic mission to slay a world-ending dragon as ‘quaint’, but here we are.

What you get with Shadow Warrior 3 is a linear rush across the game’s ‘neo-feudal Japan’ setting, listening to Lo Wang karaoke-ing and quipping his way through largely same-y combat encounters. Of course, Shadow Warrior 3 is enthusiastically irreverent to the bone, so the stakes never feel terribly meaningful, yet strangely, the game’s tone is constantly hot-footing between caring too much and too little about its characters and world.

Significant betrayals and deceptions are passed over in a manner of moments, character relationships are grown and changed with throwaway lines of dialogue, and the cast of the game is so small that the plot starts to feel like a minor group-chat argument between four horrible, irritating people rather than an adventure to save the world.

Aside from the core combat experience, everything in Shadow Warrior 3 feels tangential; most of all Polish developer Flying Wild Hog’s setting and cultural borrowings from Japanese folklore and mythology, which are given all the thematic weight of decorations for a child’s birthday party. Owing mostly to the game’s highest priority of maintaining an entirely unserious tone, Shadow Warrior 3’s refusal to truly care about any of the cultural touch-stones it’s taking advantage of kneecaps the game.

It means the narrative rarely stops to marinate in the world it’s building, often too concerned with getting you to the next bullet arena or back into the combat, where the majority of the game’s design highlights lie.

Looping and weaving through the death traps of Shadow Warrior 3’s arenas is where the game comes closest to success. Taking advantage of an increasingly bulging weapons wheel and a dedicated ‘right click to katana’ attack, players wall run, grapple, explode barrels and deploy environmental traps as they tear through increasingly vicious waves of enemies later in the game. The problem emerges as the broader gameplay loop becomes clear. Players start a level, run and grapple hook down a series of corridors and out-door-idors, enter into a vaguely round room, and thus the killing begins.

The intent behind the equal footing given to gun and swordplay in Shadow Warrior 3 is admirable, but while the gunplay mostly feels fine, there’s a rapid standardisation of these encounters that happens, even within the opening hours of the game. Which is to say, I never met a wave of demons I couldn’t defeat while air-dashing and emptying every gun in my possession; turns out it’s a pretty effective solution against hellish pursuers.

Environmental traps like totems of spinning blades and meat mincers the size of barns crop up every now and then, but their effectiveness fails to spice up combat encounters that quickly become harder and harder to differentiate from each other.

You can grapple hook (including extended grapple-hooking navigation segments between combat encounters) and wall run your way around specific parts of arenas, but the usefulness of the mechanic is largely unfulfilled, with Shadow Warrior 3 resorting to putting health pickups on the wall run strips, like an owner trying to tempt their dog into the bath with peanut butter.

At most, wall running will get you up to a higher vantage point, but in a game with double jumping and air dashing, wall running immediately feels less and less necessary in a combat sense. The same goes for grappling, a mechanic that boils down to hitting E on glowing green rings and watching the same animation each time, as Lo Wang flings himself weightlessly across dangers below; it’s a fine traversal mechanic, but does nothing to add friction or demand much from the player at all, even as enemies advance.

The enemies do fill different roles at least; smaller mobs can be buffed to drop resources ala Doom’s chainsaw mechanic, flying enemies keep you under pressure, and larger enemies deal heavy damage, and keep you on the move. Each can be dispatched using one hit kill attacks, and a Gore Weapon specific to that enemy; dispatch a hulking Oni demon and you’ll knick it’s hammer for a limited time, swinging it around with all the weight of a Skyrim weapon. Best a samurai-esque Hattori, and you’ll be rewarded with a massive homing cleaver.

Since the weapons of Shadow Warrior 3 are largely those you’ve seen before in arcade shooters of this ilk; an automatic shotgun, a rail gun, a spinning blade launcher, etc., it’s the Gore Weapons which are the true avenue for creativity on the battlefield; at least until you realise that not all Gore Weapons are created equal, and there are clear advantages to the aforementioned homing cleaver over some enemies that require even more of the ‘Gore Weapon Getting Juice’ than the Hattori to part them with their special abilities.

Sadly, replayability isn’t backed up by anything other than hunting for upgrade orbs for these weapons, or passive abilities like health regeneration. Each playthrough of the campaign will see you wall run and grapple through the same curated platforming sections each and every time.

That’s the problem with Shadow Warrior 3. For all it’s hay about subversiveness and whacked out combat, there was never a moment during its campaign where I didn’t know exactly what to do, the basic shape of what was to come, and the exact way I’d solve those problems once I got there. The game has a linear, flat trajectory all the way through – and its inability to truly bring its own world to life is a key failure in what could have been a far more charming, interesting experience.

The PC version of Shadow Warrior 3 was provided and played for the purposes of this review.