Sable Review: A Diamond in the Rough

Sable's non-linear structure is liberating, letting you explore at your own whim. But its many technical issues contrive to hinder your journey.
David Wildgoose 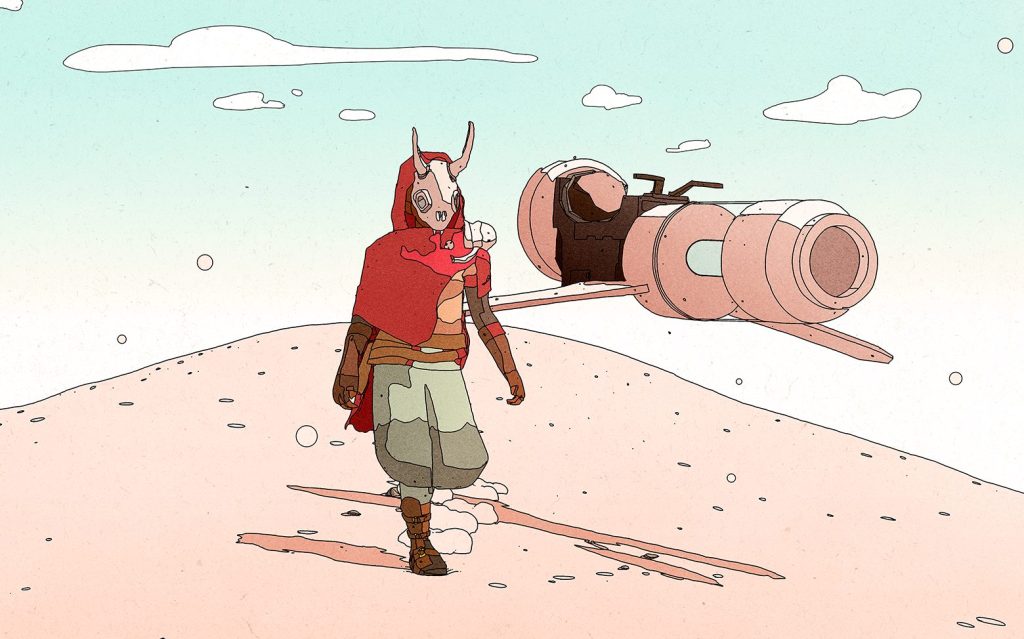 Sable is a frustrating and uneven experience. At its best, Sable scales giddy heights, instilling a sense of awe and timeless majesty while still managing to impart an affecting, down-to-earth tale. Yet just as often it is caught at its worst, it stumbles near the summit and a hazardous gust of game-breaking bugs, irksome glitches and a general lack of technical refinement sends it crashing back to the ground.

Central to the nomadic cultures of Sable’s world is a coming of age ritual called The Gliding. Teens on the cusp of adulthood are granted the ability to hover and glide through the air encased in a magical aura known as the Perpetual. They then set out to travel the land, experimenting with different roles, as they try to find out who they are–the Perpetual serving as a kind of safety net, albeit one that will literally catch you when you fall. Sable herself is about to undertake her Gliding. Think of it as a kind of gap year on an alien planet, only with less drinking and fucking and more lending a hand to those who need it.

Once Sable leaves the small starting hub area, she’s free to head in any direction and accept or reject any quest she encounters, before eventually returning home – at a time of her choosing – to pick her path in life. In fact, there’s no main quest guiding her journey at all, more a collection of activities that she can dip in and out of whenever you like, each revealing some aspect of her culture and suggesting possible futures for her. Focus on charting the farthest points and Sable will be nudged towards cartography; participate in various forms of play and she may begin to see herself as an entertainer. Be open-minded and sample a bit of everything, the Gliding insists, but stick with the things that deliver happiness and satisfaction.

At times Sable can evoke the same feeling of liberation experienced when exploring Breath of the Wild’s Hyrule for the first time. Like Link, Sable can climb most surfaces, though her stamina meter is much smaller. Still, considerable mileage is gained from finding a way to shimmy up all kinds of weird and wonderful structures, from impossibly-shaped rock formations and complex tiered buildings to giant robots frozen in time and the ruins of doomed spaceships. As you sift through the sand of its ancient alien landscape, Sable recalls the wondrous sense of aeons-old mystery felt during the early hours of the original No Man’s Sky. Everywhere you look there’s something fascinating to catch the eye and, when you arrive there, something else to investigate just a little further over the horizon.

Hindering exploration, however, is the clumsiness of Sable’s on-foot traversal. The irregularity of much of the terrain means that Sable is frequently switching between climbing and vaulting animations, often multiple times in the space of a few seconds. She’ll start running up an incline, then switch to climbing when it becomes too steep, then stop at a step she can’t quite run over and the vaulting animation will play before she starts climbing again. Negotiating such hills–of which there are many–is a stuttering exercise in patience that rapidly saps the desire to see what’s at the top.

Most travelling is done via Sable’s hoverbike, a stylish piece of makeshift engineering that can handle all but the most vertical terrain and leaves two solid-white vapour trails in its wake that never stop looking cool. Controlling the bike is very straightforward, though in a similar fashion to when Sable is climbing, the bike gets very twitchy when passing over uneven ground and often ends up getting snagged on rocks and bouncing in odd directions. It’ll never crash or take damage, but it feels particularly clumsy during these moments, a disappointment all the more striking for how good it feels when the bike is doing what you want it to do.

Sable is capable of moments of staggering beauty. Clean black lines, minimal detail and bright, flat-shaded colours – a style heavily influenced by the French artist Moebius – lend a retro-future atmosphere that feels both humble and otherworldly. The deliberately low-frame animations are tinged with a deep nostalgia for a certain style of cartoon from the 1970s and early 1980s. But it’s also frequently ugly, particularly when night falls and the bright colours are washed away; indoor scenes at night often look like little more than a quickly sketched line drawing in Microsoft Paint. It’s a strange sight in a contemporary game.

Glitches chafe at every edge of the experience. The all-round technical performance is poor, with frequent slowdown and screen-tearing even on a high-spec PC, while it’s virtually unplayable on an Xbox One. Sometimes the menus used to buy and sell with merchants don’t update the currently highlighted item, leaving you to guess at what is being selected, and sometimes the menus stop working altogether. I’ve seen interactive prompts disappear seemingly at random and puzzles break when I tried to drop an object in what I thought was the correct place. Most of these issues were resolved by quitting and reloading, but their abundance is dispiriting.

A more persistent issue is losing your hoverbike. When out in the wilderness, you often dismount to climb or explore on foot and tend to find yourself a long way from your bike when you’re done. There’s a button to call it to you, but instead of magically appearing behind you like your horse in so many modern video games, your bike has to make its physical way to your present location. And every time, without fail, it will get stuck on something and doesn’t make it. Worst, and most permanently of all, my save file corrupted and I had to start over after about 10 hours of play. All these issues combine to almost ruin what is otherwise an exceptional game. It’s testament to what Sable does well that I was willing to endure its faults in order to see its story through to the end.

It’s testament to what Sable does well that I was willing to endure its faults in order to see its story through to the end.

Peaceful and contemplative, Sable is a game focused on exploration and discovery. Of exploring a beautiful and serene alien landscape and discovering the secrets of its past, and of exploring the varied ways in which a person can contribute to their community and discovering the roles that provide them with the most satisfaction. Sable’s non-linear structure is liberating and lets you explore at your own pace and in whatever direction your whim takes you. But its many technical issues–including poor performance and game-breaking bugs–contrive to stymie your journey to the extent that your Gliding may never leave the launch pad.

The PC version of Sable was provided and played for the purpose of this review.