Pokemon Brilliant Diamond is a great remaster of a classic Pokemon game - but it also reveals how far the franchise has come.
Leah J. Williams 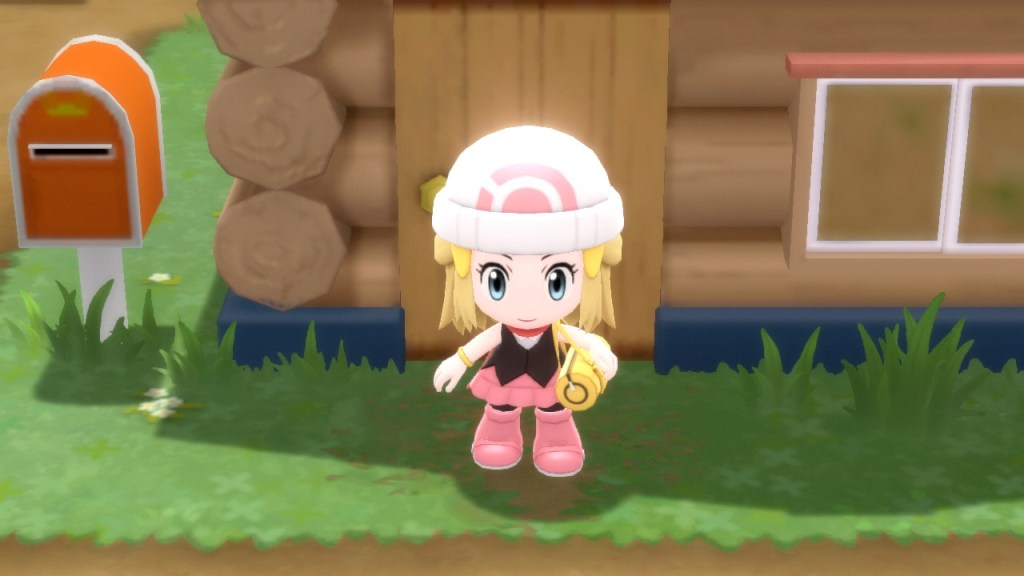 Pokemon Diamond and Pearl kicked off a brand new era for the handheld game franchise, and swept a whole generation of kids up in a tale of adventure and Pokemon–battling glory. It helped them learn the value of the internet, and brought friends closer together with features like the Underground. Pokemon Brilliant Diamond is a great remaster of this experience, despite being held back by its linearity.

While newer titles like Pokemon Sword/Shield and Pokemon Sun/Moon have strayed away from the traditional Pokemon formula, with wider open worlds and a focus on exploration, Pokemon Brilliant Diamond and Shining Pearl return the series back to basics.

You begin your journey in a small town, and travel from city to city based on where the map takes you. There’s no real ‘choice’ here – stray Pokemon block paths you’re not meant to take, and the need for special moves like ‘Fly’ and ‘Surf’ often impede your journey.

The action is extremely linear, and you follow along a set path. If you stray outside this path, the game makes sure to throw up roadblocks and diversions until you get back to where it wants you to go.

To advance, you’ll often need to spend time wandering through fields (or in the Underground) battling every stray Pokemon and trainer you come across.

While newer games are more forgiving with power levels, the opening hours and gyms of Pokemon Brilliant Diamond are surprisingly difficult, and require players to actively build up the strengths of their Pokemon crew. This, after all, was what Pokemon used to be about: becoming the best there ever was.

It’s occasionally unfair, but the game does a great job of levelling the playing field the deeper you travel into its world. The more battles you undertake, the stronger your Pokemon will be. If Grass Pokemon trip you up in the early stages, expect them to be a cakewalk by the end.

Die-hards may take issue with how the difficulty levels have been balanced (EXP Share now means all your team levels together, rather than individually), but for kids experiencing classic Pokemon for the first time, it should be a real joy.

I remember countless hours of frustration trying to battle through every gym in the game – but Pokemon has always been about fun, and these tweaks amplifying that fun for a fresh new audience.

This fun also comes in the form of the Grand Underground, a new feature which expands on the original games and effectively breaks up the relative monotony of the game’s exploration.

How the Grand Underground works

In Pokemon Brilliant Diamond and Shining Pearl, you can head into the Grand Underground at any time. In this location, you can fight new Pokemon, uncover special gems, build a secret base, and unlock in-game rewards.

You can also meet up with friends, and go running around together in a wider world filled with secrets.

While this game’s Underground differs a lot from the originals, the changes here are fantastic. There’s more to explore, and plenty more to do, with the game’s mini-dungeons being great for finding new Pokemon and gathering experience.

Even after hours in the Grand Underground, I still found myself rattling around, looking for more spheres and statues. Running into other players down there was a real joy, and there’s a sense of connectedness in the Underground that’s not often shared in Pokemon games. It’s a feature that’s ripe for a return in the future, and great for wasting time with.

As one of the more ‘modern’ features of the game, it’s also a great distraction from the linearity of Diamond and Pearl.

Despite the advances these games made for the Pokemon franchise, they are still products of their times. As remasters, Brilliant Diamond and Shining Pearl operate within the limitations of each game – and that means gameplay is occasionally very stilted and awkward.

The most clear example of this is in the sparse cities and buildings that dot the in-game map. While later Pokemon games seem alive and populated, each city in Brilliant Diamond is occupied by few people, who seem to turn in circles and repeat the same two lines of dialogue.

Inside buildings, people sit at empty tables, pace back and forth, or stand by windows with blank looks on their face. In the original titles, this sparseness made sense: the technology hadn’t quite enabled the Nintendo DS to load in multiple unique assets.

In a modern Pokemon title, it stands out like a sore thumb.

Having areas feel so sparse is eerie, and something that’s not helped by the game’s doll-like aesthetic. While the spareness was previously hidden by lavish pixel art, the new 3D art style makes spaces seem bigger and emptier than before.

Overall, the style works quite well – and the polish here is impeccable – but it does reveal a lot about Diamond, Pearl, and how Pokemon games have changed over the last two decades.

The Pokemon franchise has changed a lot since Diamond and Pearl

While both Diamond and Pearl were innovative in their era, the series has long since moved past them – to the point where the remasters operate more as novel gems than essential Pokemon titles.

Playing Brilliant Diamond, I was wrapped up in the nostalgia of my childhood. It was fantastic to re-explore a world I’d known so well, and see how older features translated in the shiny remaster. But linear gameplay, a steep learning curve and sparseness hold the titles back from greatness.

Both Brilliant Diamond and Shining Pearl harken back to a time when games were simpler, and tougher. While the graphical polish and improvements to gameplay keep the remasters from feeling too dated, the overall gameplay structure still feels antiquated.

As a nostalgia trip, Pokemon Brilliant Diamond is simply excellent. The changes here have elevated the original titles, and improved them for a modern audience. Still, there are certain elements of gameplay that feel frustrating and outdated.

While it remains a fun game, Pokemon Brilliant Diamond works better as a reminder of how far Pokemon games have come.

A copy of Pokemon Brilliant Diamond for Nintendo Switch was provided and played for the purposes of this review.