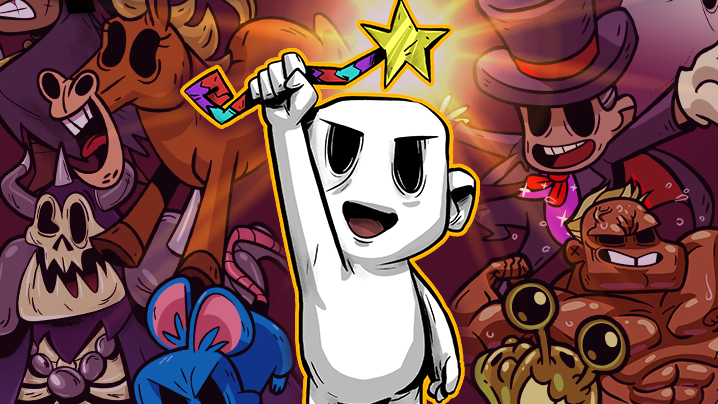 Drinkbox Studios has a penchant for making skill-based experiences that successfully mix video game genres – like the Metroid-like brawler Guacamelee, and first-person swordplay game, Severed. Their latest is no different, and no less successful. Nobody Saves the World is a top-down action adventure reminiscent of classic Legend of Zelda games, combined with a customisable class system inspired by Final Fantasy Tactics.

You play Nobody, a featureless grey creature with no memory of who they are, who finds a magic wand that lets them turn into various eclectic forms. A great Calamity has struck this anachronistic fantasy land, and the only wizard who can stop it – the owner of the wand – is missing. So Nobody sets off to do the job themselves – if not to save the world, then because they don’t have anything else to do. The story is predictable, but presented with the same humorous irreverence as Guacamelee, so even though the characters take this world seriously, the game absolutely does not, which is great.

The world is a satisfying maze, clearly inspired by games like Link’s Awakening. The map is separated into distinct, interconnected biomes with each containing one or more story-central dungeons and repeatable, mostly optional ‘demi-dungeons’. Access to the whole map is gradually granted throughout the story, but you are given a great deal of choice regarding where to go next. Exploration is encouraged, with every corner hiding sidequests and treasure, and a detailed map screen that handily keeps track of everywhere you’ve been, making it easy to find pathways you haven’t taken yet.

The action in Nobody Saves the World revolves around a flexible class system called ‘forms’. Combat is fast and usually involves enemies coming at you in droves, and while you’re able to fight in your basic Nobody form, your feeble slaps won’t get you very far.

Forms each have their own uses and weaknesses. For example, with your initial Rat form, you can take down enemies quickly, but only at very close range. Forms gain levels individually and open up the pathway to more forms – powering up as a rat unlocks two new forms, each with different mechanics and abilities. Levelling one of those unlocks two more forms, and so on. There are 18 total forms arranged in a compelling flowchart that encourages you to spend time focussing on learning each different form in order to unlock more of them at higher tiers.

While some forms are fantasy archetypes such as the Ranger and Monk, others are far more unusual, more amusing – there’s the stage magician, body builder, and my personal favourite, a horse. Since no single form can target all enemy weaknesses, juggling between forms is important for battle, but it also plays a big part in world traversal, too – only certain forms can fit through small gaps, only a handful can swim, and so on. It’s an interesting, engaging dynamic, and one that’s accentuated by the game’s approach to character progression.

Nobody Saves the World is an action RPG in concept, but some standard conventions of the genre are downplayed in favour of more exciting, action-focussed challenges.

For example, experience points are not gained by defeating enemies, but by how you defeat them. Each form comes with a list of quests, which may start off as small challenges such as using a particular ability 100 times, or killing 3 enemies at once.

The difficulty curve demands creativity from the player, to familiarise themselves with the intricacies of every available form to eventually learn the best way to combine them together – which is important, as later quests require ‘borrowing’ abilities from other forms. Levelling up becomes more of a challenge, not because of arbitrary experience gain caps, but because you personally have to put more thought in.

The dungeons themselves introduce handicaps that drive you to mix up your playstyle in even more creative ways. In one dungeon, enemies might explode upon death. In another, every nearby enemy heals whenever you pick up a health item. One dungeon locks you into the form you enter in. These modifiers, combined with form quests, ensure that each of the 20+ dungeons present a unique challenge, partially influenced by your own choices.

The smaller demi-dungeons change their layout every time you enter them, and I enjoyed the flow of figuring out how to stay alive within their constraints while upgrading my forms. In contrast, main dungeons block form progression completely, making you focus on your entire arsenal instead of scraping by with whatever you want to level up next. Nobody Saves the World constantly asks you to reconsider your strategies, however slightly, every few minutes.

Additionally, due to a very aggressive level scaling system, enemies and dungeons are never more than a few levels below yours, so there’s no real way to grind and cheat the system. The game is designed to reward player skill and creativity, continuing the design ethos of Drinkbox’s previous works.

Nobody Saves the World blends recognisable aspects from disparate works to create a wholly unique experience. Its systems will challenge you and make you think, and it’s easy to stay engaged while juggling the number of forms and abilities available to the player, while accounting for the variety in world, dungeon, and quest design throughout the adventure. The game enthusiastically discards well-trodden concepts shortly after they’re introduced, and rewards you for doing the same.

The PC version of Nobody Saves the World was played for the purpose of this review. The game was accessed via PC Game Pass.