Metroid Dread is a lavishly-created commitment to series tradition, but a lack of successful new ideas and control accessibility concerns are disheartening.
David Wildgoose 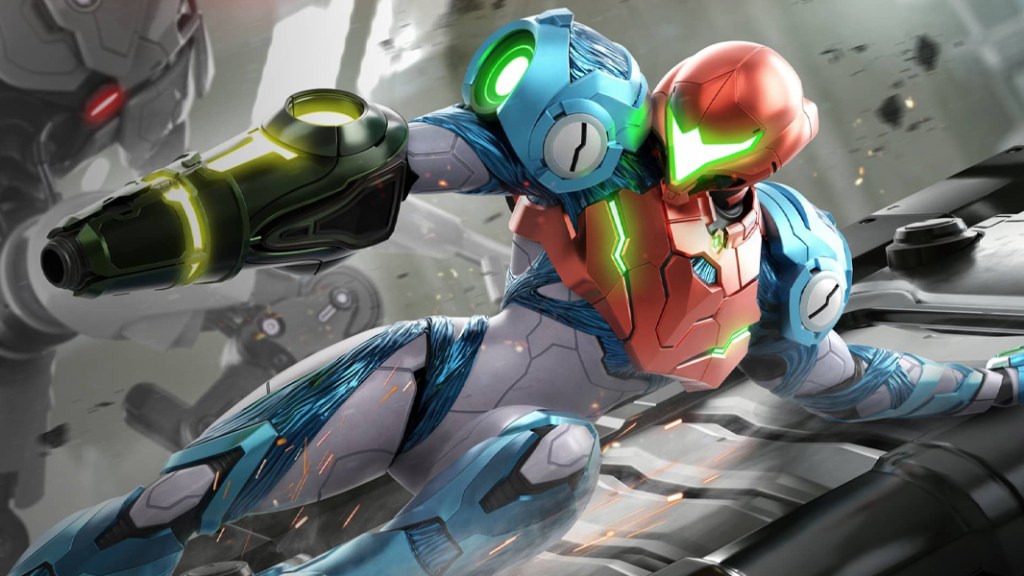 Like the glossy metallic corridors that comprise much of its planetary base, Metroid Dread gleams with polish. Technically accomplished and tautly designed, it finds Nintendo and Spanish studio MercurySteam, the partnership that also co-developed the previous entry in the series, Metroid: Samus Returns (2017) for the 3DS, operating near the very top of their game.

Yet for all its refined excellence, Dread plays it too safe. Those familiar with the basic template of Metroid will be disappointed to find themselves going through the motions.

Since the critical success of Metroid Prime (2002) and its sequel, Echoes (2004) – which not only reinvented the side-scrolling 2D platformer as a first-person action-adventure but did so in a way that enhanced the series’ hallmarks of atmospheric mystery and tense exploration – Nintendo has seemingly struggled to know what to do with Samus. Steps into greater action (Prime 3: Corruption) and a deeper narrative (Other M) have faltered while multiplayer-focused experiments (Hunters and Federation Force) have missed the mark entirely. At E3 2017, Nintendo announced they were developing a fourth Metroid Prime game with Bandai Namco; two years later, the project was restarted with Nintendo once again working with Retro Studios, the developer of the original Prime trilogy. A further two years later, we’re still yet to see any images or footage, or hear any specific details, about Metroid Prime 4.

Unlike Nintendo’s flagship franchises, Mario and Zelda, perhaps these struggles are the result of the building blocks of Metroid being too specific and thus only able to be combined in very particular ways. Small tweaks to the balance between combat and exploration have proved destabilising and tonal shifts have succeeded only in alienating long-time fans rather than drawing in a broader audience. Perhaps, then, it shouldn’t come as a surprise that, following Samus Returns, itself a relatively faithful remake of Metroid II: Return of Samus (1991), Metroid Dread also adheres to the side-scrolling 2D roots of the series.

All the expected elements of a traditional Metroid are present. A map that sprawls over various outposts and subterranean networks across the planet ZDR. Progress across the map is gated behind various abilities that Samus must track down and acquire: doors that only open when shot with a specific weapon, suits that protect her from particular extreme elements, the morph ball and bombs, and so on. There are bosses to fight and secret items to find, all encountered at a steady explorative pace, gently leading you through the critical path with the occasional dash of urgency and a modest degree of backtracking.

Doing all of this looks fantastic. Samus herself is exquisitely animated and, put through her paces, is a joy to behold, as she sprints, leaps, climbs, rolls and slides through the gymnasium masquerading as a research base. Indeed, Metroid has never looked so good.

Environmental details are varied and gorgeous. Frosted-over corridors exude a bitter bite while the intense heat haze emanating from lava-filled rooms scalds the screen. The delicate, washed out, blurry refraction whenever Samus enters water never fails to startle with its beauty. Overall, Metroid Dread is blessed with lavish visual appeal.

But it doesn’t always feel fantastic. Broadly speaking, the controls are overly complicated, with many moves and abilities requiring you to hold down multiple buttons simultaneously or press them in rapid succession, all while manoeuvring at least one – possibly both – analog sticks. Relatively simple functions like aiming and shooting your weapon feel cumbersome. More advanced techniques, such as the Shinespark, are initially baffling and require considerable practice to even understand, let alone execute flawlessly.

Metroid Dread isn’t a difficult game in terms of its combat. Regular enemies are mostly push-overs and bosses, while perhaps tougher on average than the standard Metroid boss, don’t push you to your very limits in the way a Dark Souls boss might. But in terms of accessibility, its control system is a genuine barrier to entry. Even an able-bodied player like myself found the button combinations awkward and confusing, especially in the heat of battle where my idiot fingers frequently undercut the responsiveness of Samus’ movement.

It’s not even possible to remap the button layout; you’re forced to use the option in the Switch’s system settings, meaning you can’t even see which particular in-game control you’re reassigning. In this area, Dread is yet another example of Nintendo’s long history of ignoring accessibility concerns – an oversight all the more strange given their dedication to reducing barriers to play during the Wii era.

Just as disappointing is the shortage of genuinely new ideas. The counter-attack move introduced in Samus Returns, letting Samus parry an enemy just as it attacks and leaving it vulnerable to an instant-kill follow-up attack, has been refined. It presents an interesting risk/reward incentive – countered enemies drop more items, but if you mistime the move you’re gonna get hit – that would be more interesting if the latter penalty was more severe.

The main new idea Metroid Dread introduces is at best a non-event and at worst a real drag. Certain regions of the map are patrolled by a deadly enemy called an E.M.M.I. who will hunt you down while you’re on its turf and, if it catches you, it’s basically game over. You can counter them, buying you a chance to escape, but the timing is unpredictable and extremely tricky to pull off with any consistency. Samus can temporarily turn invisible to hide from an E.M.M.I. and the odd pressure-sensitive gate can be activated as she runs past, requiring her pursuer to find another path.

But what should be an urgent change of pace instead all-too-often feels slapdash and comical. Get caught by an E.M.M.I. and you simply respawn at the entrance to its lair and try again to find the route past it. The stealth options are too limited to be relied on and the penalty for failure so minimal that the path of least resistance is to simply barrel through, dodging any enemies and avoiding the E.M.M.I. as best you can until you discover the exit. The only thing missing is a moody synthesiser playing Yakety Sax.

With a commitment to tradition undermined by the failure of its one nod towards innovation, Metroid Dread is both a retreat from the recent experiments of the series and a continuation of the identity crisis it has endured since the Gamecube era. Backtracking to the safety of familiar haunts, even ones as polished and gleaming as these, can’t help but leave you wanting more.

A copy of Metroid Dread for Nintendo Switch was provided and played for the purposes of this review.