Two halves make a weird and wonderful whole in this hybrid of tactical combat and dating sim.
Leah J. Williams 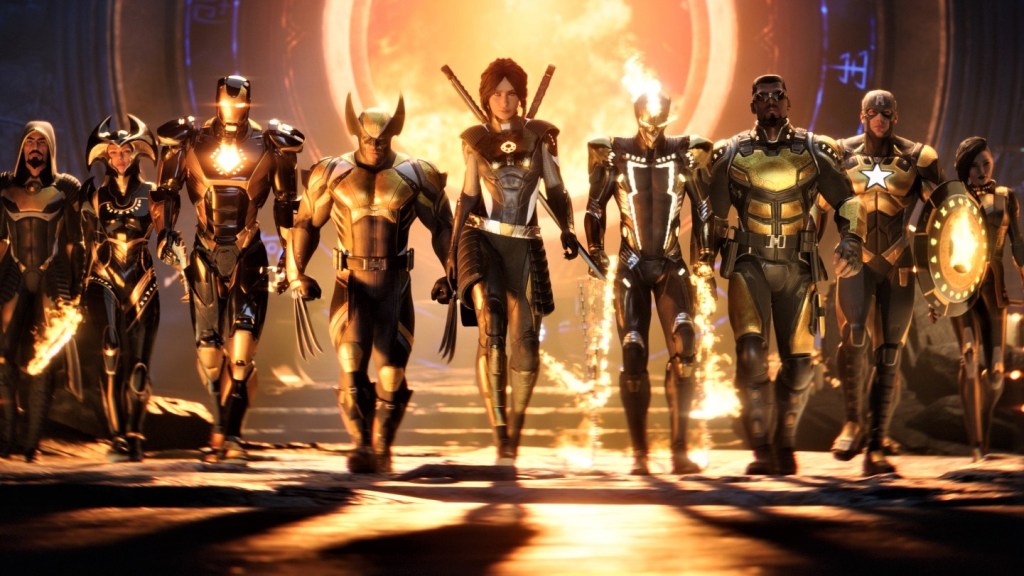 Marvel’s Midnight Suns is a compellingly strange game – one backed by a clear love for the Marvel mythos, and equally unafraid to carve out its own weird path in the world of games. Just when you think you have a grasp on what this adventure might be, it shimmies out of grasp – refusing to be put into a singular box, or define itself by strategy games of the past.

Developer Firaxis is well-known for its strategy specialty – XCOM and Civilization being its flagship contributions to video games – but in experimenting with new gameplay forms and creating a hybridised tale that owes a lot more to the romantic dating sim genre than XCOM, Marvel’s Midnight Suns delivers a deep, multi-layered, and emotional experience.

In Midnight Suns, you are The Hunter – child of the demon Lilith, resurrected to fight against her in a terrifying supernatural war. The Avengers, and a cast of emerging heroes including Robbie Reyes (Ghost Rider), Nico Minoru, and Magik, are your closest companions – drawn together to fight back against Lilith, and protect the world from oncoming danger. At every turn, your circumstances grow more dire, requiring you to forge strong bonds, and charge headfirst into tactical strategy battles.

While the game integrates the complexity of turn-based RPGs, with its slow-to-master card upgrade and interlocking Friendship systems, the time it takes to develop each and every hero on its roster makes narrative beats and even combat feel deeply intimate.

Midnight Suns asks you to form tangible friendships on your adventure, each of which will inform your personal experience of the game. Pick the wrong finicky dialogue option, and you could put Magik, the prickliest member of the group, offside. Her attacks will be less enthusiastic in combat, and your team will suffer as a result. But if you take the time to understand her rough demeanour, and why she balks at friendly dialogue, you’ll eventually crack her shell of defence, and help her open up on the battlefield, and in your group hangouts.

In one team bonding exercise, Magik feels spurned by the decision to have a surprise birthday party thrown for her. In subsequent scenes, you travel through a hell dimension to comfort her, and learn more about her childhood living in Limbo, at the mercy of demons. It explains much of her character, and why she feels such a connection to Lilith and her thralls.

Each member of the Midnight Suns has their own story to untangle, one cloistered moment at a time. In Hangouts, you slowly unpick their tales – revealing inner warmth, inner demons, and backstory that informs their worldview.

Blade, for example, initially rejects a deeper dive. When The Hunter asks his real name, he propels the conversation away, declaring that only his real friends know his truth. Hours into the game, after many battles, training sessions, and Hangouts, he finally sits by a bench and declares: ‘My real name is Eric Brooks.’ It’s a moment that’s earned, and feels all the more meaningful because of your efforts.

The trust of the other Suns is earned in due course, through measured dialogue, successful battles, and spending thoughtful time together.

This level of attention was initially surprising – Marvel’s Midnight Suns is far more entrenched in deep narrative and personal battles than you might expect. But it’s this intimacy that imbues the entire game with such a warm and welcoming sense of camaraderie. It also often provides a light-hearted touch to the shadowy, horror themes of the tale.

This is a game of creeping tentacles, oozing slime, dark curses, terrible books, and dreadful things – but in placing so much focus on teamwork, fun dialogue, and just kicking back together, Midnight Suns is also a colourful and exciting adventure through the darker parts of Marvel’s universe. While there is a creeping sense of dread throughout the romp, particularly as Lilith reaches her scaly fingers into the hearts of more powerful heroes, this horror is effectively allayed by the love at the heart of the tale.

The Midnight Suns care deeply about each other – and this sense of teamwork permeates every part of the game, drawing you deeper into the action, and ensuring the stakes are both high and personal.

This then feeds into the excellent combat of the game – an XCOM-like tactical strategy system that shakes up tradition through the implementation of an action card system. When you’re not spending time in the Abbey hub world, hanging out with your fellow Suns and strengthening your bonds, the majority of the action – the steps that push the game’s dense storyline forward – takes place in singular story or side missions.

Combat in Marvel’s Midnight Suns starts with a single draw of cards, randomly picked from individual character decks that can be customised and added to as you befriend fellow heroes. To play high-powered attack moves, you need to build up Heroism points. These are also earned by playing particular cards, making combat a thoughtful affair.

You’ll need to begin by analysing your draw, and figuring out how best to play your cards. You only have a handful of plays per turn, with each delivering or subtracting Heroism. It requires genuine tactics, particularly if you’re looking to squeeze the most damage out of each round. With clever thinking, you can exploit your plays to an impressive degree, prioritising the building of Heroism before unleashing moves that are very high-powered, chain together, or inflict a bleed status effect – any of which can contribute to an immediate shift on the battlefield.

Stringing together attacks, based on chance draws, redraws and careful planning, will circle you ever closer to taking down Lilith’s minions, and finding hope in desperate circumstances. Each battle won draws the demonic armies closer, across a massive campaign filled with familiar Marvel faces, and plenty of hectic tactical battles.

Midnight Suns is a game of two disparate halves, but they work together to become something truly great. Each system feeds into the other – with the relationship-building aspect contributing directly to combat wins, finding new cards, unlocking character potential, and developing team combos on the battlefield.

Taking your fellow hero for a walk through the woods can lead to passive ability gains, and new special item cards to be deployed when you need them most. Combo moves between characters are also unlocked by dialogue, allowing for extremely damaging techniques on the battlefield.

There’s a real sense of pride that comes from all of this. You can see the tangible results of the companionship you have with your favourite heroes during combat – making it far more devastating when they get knocked out or attacked. You helped build their abilities. You built up their strength. The heroes live and die by your efforts, and combat feels supremely personal and impactful as a result.

The ability to choose which heroes come with you on select missions also informs this sense of personal ownership. You might enjoy Iron Man’s high-flying laser blasts, or Captain America’s ranged shield combat. On the other hand, Blade’s high-powered bleed attacks, which slowly sap enemy health, may work best with your chosen tactics. Ghost Rider’s ability to send Hydra goons to hell may also aid your quest, in the same way Magik’s Limbo portals create easy-to-exploit knockback opportunities.

The choice is yours – and while focussing on specific heroes may diminish your capabilities on select missions with required heroes, it does make your adventure feel unique to you. I focussed largely on Ghost Rider, Blade, Magik and Nico for my playthrough, and left Captain Marvel, Iron Man, and Doctor Strange as the weaker links.

This impacted select story and side missions – but increased the satisfaction level of challenges tenfold. When the odds are against you, the door is open for cheekier or more clever plays. It invites creativity, and repeating challenges until you find that key tactic, or stumble across a particularly fortunate card draw.

Unique abilities can also be guided in clever plays to snatch victory in increasingly tougher battles, against opponents with abilities that are equal parts frustrating and tactically impressive. Venom, for example, can trap heroes in sticky webs that require you to pause battle and replan attacks. You’ll need to keep your wits about you to survive – but it’s in that struggle where Marvel’s Midnight Suns thrives.

On the battlefield, and on the grounds of the Abbey, you determine your own fate through this adventure. Friendships are forged. Battles are won. Occasionally, heroes are lost. You feel every beat of the journey, as Midnight Suns hauls you along its intimate, world-spanning tale of friendship in dark times.

While its ideas may be supernaturally-charged, and inspired by one of the strangest periods in Marvel Comics, it remains grounded and personal – imbuing its excellent tactical combat with high emotions and stakes. In dark times, light can still shine – and in Marvel’s Midnight Suns, you and your team of heroes are that light.

The PC version of Marvel’s Midnight Suns was provided and played for the purposes of this review. GamesHub has affiliate partnerships. These do not influence editorial content. GamesHub may earn a small percentage of commission for products purchased via affiliate links.