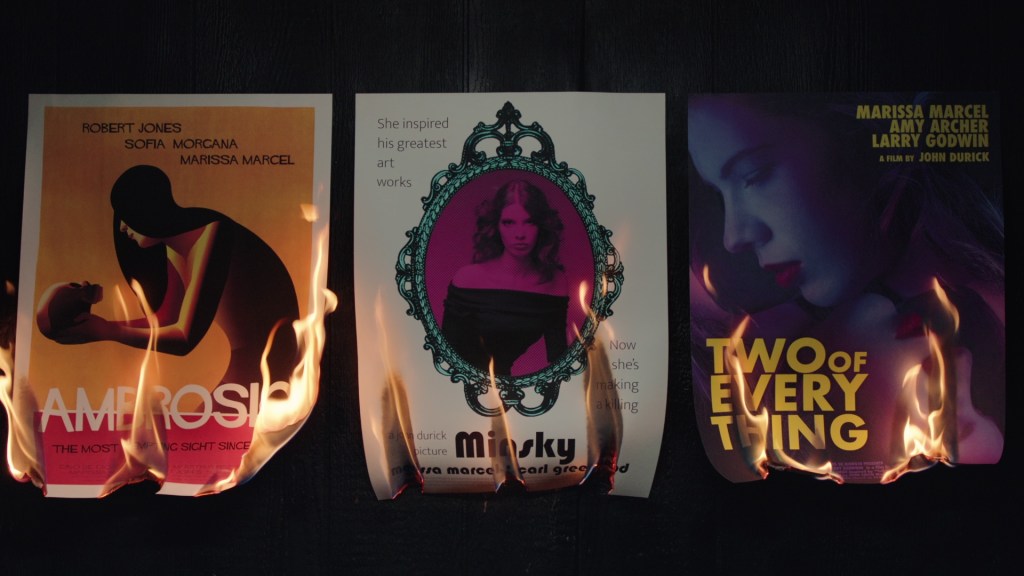 I can’t stop thinking about Immortality.

It’s been about a week since the credits rolled and the game assumed that I saw all I needed to see. And in that time, the characters I got to know, the situations I uncovered, the stories I pieced together, and the faces I stared at for hours are still stuck in my mind. Especially the faces. It’s a powerful game.

[Note: This review will avoid any significant plot details of Immortality]

Immortality comes from Sam Barlow and Half Mermaid Games, and is another determined step in Barlow’s wholly unique style of non-linear, interactive narrative games that have surprisingly few imitators.

Like Barlow’s previous games, Telling Lies and Her Story (both personal favourites), Immortality situates you as the active participant in the unravelling of a grand conspiracy, via the piece-by-piece uncovering of real-life footage, filmed with real-life actors. You’ll begin with a single video, identifying and uncovering key paths to unearthing more footage related to that first clip, and slowly constructing the greater story – as well as several smaller tales – in your head, over the course of several revelatory hours of sleuthing.

It’s a feeling akin to completing a 1000-piece jigsaw puzzle – it seems insurmountable at first, but as you begin to find similar pieces that go together, things start to come into perspective, until you gain enough context to mentally zoom out and conceptualise how every single piece fits together in the grand scheme of things.

Barlow’s method of storytelling and detective work is inherently satisfying – even more so because you interface directly with the material, without another protagonist to be the middleman. The path to arriving at one of numerous conclusions is wholly dictated by you and your own personal curiosity, with milestones and cues seemingly curated to help control the steady flow of information and revelations, and make you feel like an utter genius. You are the detective here, not an avatar of character, and it’s all the more personal and impactful. It’s an incredible experience.

But the process is not the only reason why these types of games are so absorbing – it’s the gripping stories they tell, too.

Immortality is Barlow’s most ambitious concept in this regard, and it’s also his most impactful work to date. It’s an astoundingly successful and mind-boggling piece of work – thanks in large part to the talents of an expanded cast, and seemingly a bigger production team at Half Mermaid.

In Immortality, the source material you’re working with is the raw footage from three lost feature films from 1968, 1970, and 1999, all of which star a missing actress named Marissa Marcel as a lead. All three films were shot seemingly in their entirety, but for some reason, were never released. The big mystery for you to uncover is: What happened to Marissa Marcel?

The premise of Immortality is that these lost reels have finally been found, and you are operating and viewing the footage using something analogous to an old Moviola – an analog film editing machine – which adds a lot to the satisfaction of actually navigating and viewing these clips.

As someone who spent a decade editing video footage, the procedure is absorbing, and feels true-to-life. Because of the analog source material, you’ll scrub through the actual takes in a linear fashion – fast-forwarding, rewinding, and playing things forward and backward at various speeds. The chunky, mechanical sound design and controller rumble – which comes highly recommended, despite any natural inclination you might have to use a mouse and keyboard – adds much to the experience. Each motion feels weighty, and helps you feel present.

Beginning with a late-night talk show interview, you’ll uncover and explore footage by means of a ‘match cut’ – that is, selecting the appearance of an object or person in a particular frame, and using that as a pathway to another instance of that object or person in a separate piece of footage.

For example, selecting Marissa Marcel’s face might take you to one of numerous other pieces of (potentially unrelated) footage also featuring her face, but making more specific requests – like a particular prop, a body part, a masked figure – might give you a result with far more interesting and meaningful revelations.

The conceit that Marissa Marcel’s lost films were filmed in the eras they were – and thus used physical film stock, which Immortality recreates convincingly — also adds much to the mystique of the experience. Much like the commotion that occurred when it was suggested that musicians were hiding hidden messages on their vinyl records in the 1970s (but only if you played them backward), Immortality leans into the imperfections of the medium in clever ways that greatly heighten the atmosphere and intrigue of the process in tantalising ways.

By working your way through these reels of footage, as well as behind-the-scenes interviews, rehearsals, and TV appearances with the cast and crew of the films in question, you begin to piece together multiple stories. The plot of each of the three films becomes clearer, of course, but you also get a voyeuristic window into the relationships, politics, and power dynamics between the cast and crew, and how that might change over the years and in between films.

What’s the deal with what’s-his-face and what’s-her-face? Why was there such a huge gap between Marissa Marcel’s second and third films? How come that person I stumbled across hours ago hasn’t come up in any more of this footage? The investigative process drives your curiosity in several intriguing directions.

The tidbits in between takes – everything before ‘Action!’, everything after ‘Cut’, and the elusive moments in-between, can be incredibly revealing. Aside from obvious out-of-character conversations, the looks people give each other and their body language can tell you a lot – as can the asides, the frustrating failed takes, the behaviour of the crew as they wander into the shot or speak off camera, unaware of the recording.

Much praise needs to be heaped on the real-life cast of the game, who do an exceptional amount of work to make the whole world of Immortality completely and utterly convincing as what could believably be a non-fiction story. The layers needed to their performances – actors playing actors, who themselves play a series of characters, and harbour multiple layers of motivation intent – feel staggering. The direction of the performers feels faultless and completely natural.

Newcomer Manon Gage in particular, who plays Marissa Marcel, shows off an incredible range. You see her in multiple stages of life – from a fresh-faced, naive young actress, to a confident and self-assured artist, and several layers between and beyond that. Sometimes her smile can tell the whole story. And sometimes her look into the barrel of the camera, frozen on the last frame of a reel, can utterly terrify you.

Barlow’s games have all had a thriller edge to them, but Immortality shifts into playing with elements of, not what I would call horror, but deeply affective unease. It’s something you may have experienced with the style, rather than the subject matter, of David Lynch – in fact, Twin Peaks: The Return was the last time I felt these kinds of prominent emotions. There is a deep dread that underlies Immortality, masked by the warm smile of Marissa Marcel and the fun she has with her colleagues.

Immortality is a game that will haunt you. Its sinister atmosphere is exceptionally powerful. Its layered narrative about art and artists will leave you with more thoughts, ideas, and questions than answers. It will have you clambering for someone to seek solace with afterwards. It may very well see you diving back in, hunting for closure with any clues you may have missed – just a few more hints. Something, anything. Immortality is a remarkable piece of work, and an outstanding example of the potency interactive storytelling can have.

The PC version of Immortality was provided and played for the purposes of this review.