The physics-based puzzles of Heavenly Bodies are equal parts entertaining and frustrating, and both a comedy and a tragedy, depending on whether you have a co-op partner or not.
Christie McQualter 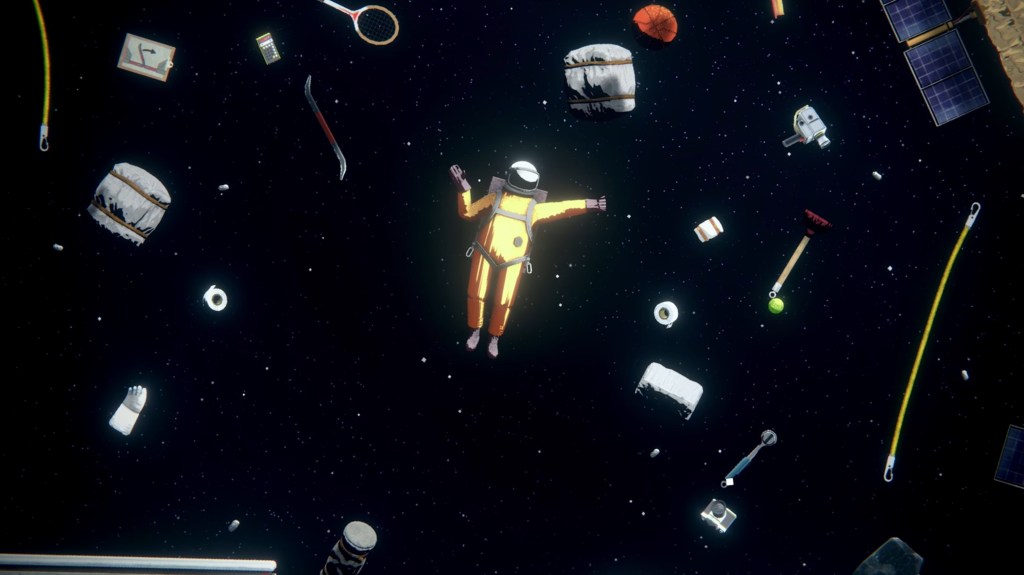 As someone who plays a lot of puzzle games, I’m well familiar with the sinking feeling that comes when you realise you’re stuck. When you’ve tried every logical solution – even some illogical ones too – but nothing is working. On more than one occasion I’ve frozen, stared at the screen, and wondered: Do other people find this part as hard as I do? Or do I just need to get good?

In the interest of making myself feel better, I choose to believe that no one goes through an entire puzzle game without feeling this way at some point. In this genre, feelings of confusion and frustration can be a sign of good game design. They make the eventual victory of finding the solution that much more satisfying. Fiero – that rush of excitement after beating a difficult challenge – is what keeps us coming back.

Heavenly Bodies unobtrusively harnesses the power of fiero to create an equally entertaining and frustrating play experience. This physics-based game from Melbourne developers 2pt Interactive has you playing as a cosmonaut aboard a 1970s scientific research space station.

To conduct your research, you need to complete tasks like connecting circuitry for space telescopes or mining asteroids for minerals. But the real challenge is grappling with the control scheme; it’s here that you’re likely to find yourself mentally and physically stuck.

The controls are reminiscent of the 2008 browser-based game, QWOP. You control your cosmonaut’s arms and legs using the respective left and right sides of the controller for each side of their body. The analog sticks control which direction your arms are facing, the controller’s shoulder triggers close your hands to grab things, and the shoulder bumpers pull your legs in. Using the right combination of carefully-timed button presses and stick movements, you can overcome the cumbersome nature of your body and manoeuvre your way through the zero-gravity environment.

This is tricky to get used to – in fact, I found that I never got used to it. In Heavenly Bodies, moving your character from A to B requires active thinking, a lack of which can easily be taken for granted in other games. There are a number of effective ways to move your cosmonaut, but individual experimentation is the only way to establish your preferred method.

The absence of gravity is similar to the feeling of slipping around an icy level in a platforming game: build up too much momentum and you’ll find yourself veering way off course. It becomes daunting when your mission requires you to go out into open space, because if you don’t use careful movements, you could float away into the abyss. While the confines of the space station brings safety, realising you’ve missed a key item and having to backtrack to hunt for it is equally stressful.

The objectives become more multi-layered and complex as you progress through the seven playable levels. Combined with the frequent introduction of new mechanics – advancing from simple activation of buttons to pulling levers, winding cranks, plugging in power cables, etc. – there’s a gradual increase in difficulty that means you can never get too comfortable.

At the start of each level, you’ll receive some technical instructions on how to undertake your task, which will then be stored in your operations manual. This handy booklet can be pulled out at any time, but it doesn’t solve all your problems for you. There’s an impressive balance between what is and isn’t spelled out: the manual tells you the what, but it’s up to you to work out the how. There’s only one correct way to solve a level, and it’s satisfying when the solution finally clicks into place.

But the overall experience of Heavenly Bodies vastly differs whether you choose to play it as a single-player or co-op campaign. During my single-player run, the experience was lonely and frustrating. Heavenly Bodies felt like it took itself seriously, and that I should too. There’s no dramatic ‘You Died’ screen to punish you for your mistakes, but the consequences are still painful: you need to face your own frustration and correct yourself to get the mission back on track.

By contrast, having a cosmonaut companion breaks that tension. Of course, it’s chaotic to be bumping into each other as you both fumble through narrow passageways, but it lightens the mood to have someone laughing at you while you have your head stuck in a cupboard, kicking frantically and unable to escape. Alone, you’d be stuck there and forced to restart the level, but with a player two, you can be grabbed by the ankles or tethered, and comically yanked out in no time.

In one stage, your rocket has two seats: one for navigation and one for controlling the mining drill. Constantly switching seats when you’re on your own is a chore, but in co-op you can each have an assigned role and work together efficiently to conduct the necessary tasks.

Heavenly Bodies will challenge you with its unique controls and physics-based puzzles, evoking feelings of frustration and elation in equal measure. While single-player can feel cold and isolating, the multiplayer functionality gives the game a welcome lightheartedness that turns disasters into catalysts for delight.

The PlayStation 4 version of Heavenly Bodies was provided and played for the purposes of this review.