Far Cry 6 tries to stretch its well-worn recipe of open-world chaos in a different way, but the resulting mixture is confused and unsavoury.
Edmond Tran 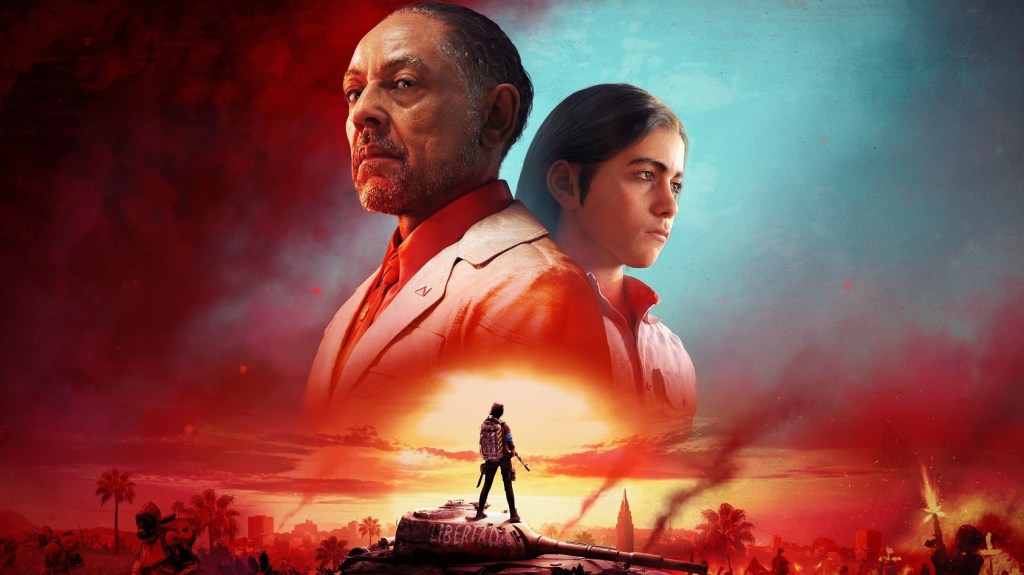 Far Cry 6 almost had me. In the first twenty minutes, protagonist Dani Rojas attempts to flee the dictatorship of Yara, clearly modelled after real-world Cuba, after her friends are gunned down by the commanding military force. She evades soldiers in the streets during nightfall and boards a rickety boat, helping other women and children bargain their way on. The boat is bound for America.

Shortly after the craft sets sail, it’s halted. The crew on deck are gunned down, and soldiers breach the hull where the Yaran refugees are hiding. Enter Anton Callisto, the ruler of Yara portrayed by Giancarlo Esposito (Breaking Bad, Better Call Saul). He gives an intimidating speech about what it means to be a ‘true Yaran’, and an elderly woman is executed. He leaves, locks the refugees in, and tears apart the boat with gunfire.

I come from a family of refugees. This scene really hit me hard. The Far Cry series is infamous for playing frivolously with its narrative scenarios – the militant middle-American setting of Far Cry 5, released during the Trump presidency, was used to say virtually nothing. At this point, I recalled the fact that the Far Cry 6 team declared their game to be political in nature, in spite of a long-held apolitical stance by developer and publisher Ubisoft. It made me think this game might be different.

In the next ten minutes, you wash up on a beach, a drunk man gives you his pet crocodile (who is wearing a track jacket), and you’re taught how to command it to eat your enemies. Soon after, you’re asked to collect depleted uranium for this drunk man so he can cobble together an infinitely-replenishing seeker missile launcher made out of PVC pipes to wear on your back. The tonal whiplash was so sudden, so severe, I couldn’t help but laugh.

Far Cry 6 isn’t different. It holds on dearly to what the series has been for the past few iterations: a large playground for over-the-top violent chaos. The island of Yara stretches as far as the eye can see, and can be traversed by land, sea, and air. There are dozens of firearms to find, build, customise, and decorate with silly little trinkets. There are gadgets that essentially give you super-powered abilities, and a team of ridiculous animal friends to help you murder people including a dachshund, a rooster, and the aforementioned crocodile. As someone who has followed the series closely, it’s fine. It’s all very familiar and comfortable. But Far Cry has been like this for a while, and a luscious new setting along with nicer-looking explosions aren’t enough to disguise how pedestrian it all feels now.

The thing that has changed, and the thing that makes Far Cry 6 more egregious than the others, is this concerted attempt at a more emotive plot that goes beyond the one, unhinged villain and his army attempting to track you down. I can see that Far Cry 6 wants to capture an image of a country suffering under a cruel regime and the feeling of hopelessness among its people. But it’s completely undermined by the actual video game the Far Cry series is adamant to continue being.

For all heartfelt attempts Far Cry 6 makes at meaningful pathos, with characters lamenting things like ‘the American Dream doesn’t come in our colour’, there’s one shouting: ‘have some fun, for fuck’s sake!’ as he hands you a weapon. A character tearfully recalling the day a military general executed student dissidents in their classroom is followed up by someone childishly quipping, ‘man! That speech was craaaaaazy!’

Dani Rojas is the first Far Cry protagonist to have a speaking role which, at times, helps create a more meaningful connection with secondary characters than past Far Cry games have managed. However, more frequently, that voice is simply used to let you know that Dani has an insatiable love for guns and thinks being a guerilla soldier is more fun than anything else in the world.

Pushing the extremes is Giancarlo Esposito on one end who, despite his known capacity for quiet, understated ferocity, operates at full bore throughout. On the other end is a weapon that shoots CDs and plays the Macarena. The tone of Far Cry 6 shifts madly, desperately trying to spark some kind of raw emotional reaction in you and then rushing over immediately after to see whether you’re okay and make sure you’re still having fun. It’s confusing. It’s embarrassing.

Far Cry is capable of meaningful changes to its formula. The moderate structural shift to unguided exploration and a more free-form progression structure in Far Cry 5 worked well for me, even if the scenario was squandered. Far Cry 6 is an overcorrection in that department.

The dilemma lies in the fact that Far Cry 6 doesn’t ever really want you to fret too deeply about the suffering of Yara and its people, because it cares much more about making sure you have a bombastic, carefree time. To its credit, the game attempts to say something, but those messages are ushered out as quickly as they enter. Far Cry is clearly not ready for the meaningful identity shift it’s inching towards. I hope it gets there soon. It’s long overdue.

The PlayStation 5 version of Far Cry 6 was provided and played for the purposes of this review.