Call of Cthulhu: Alone Against The Flames plays out like a spooky choose-your-own-adventure story.
Leah J. Williams 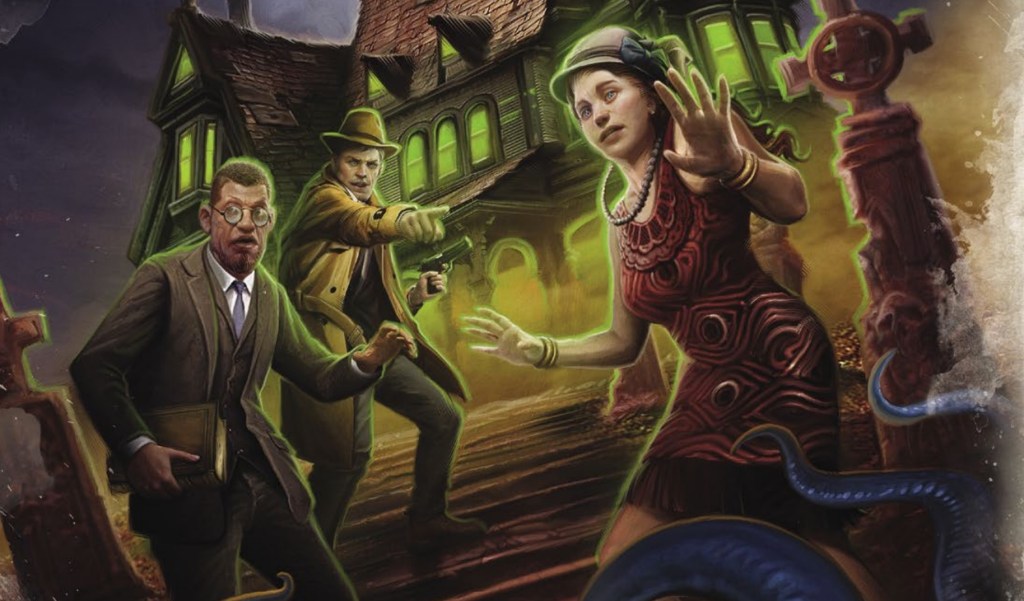 Growing up, Choose Your Own Adventure books were possibly the coolest thing a kid could own. With epic narratives charting deep space, Egyptian tombs, and terrifying haunted houses, these adventures brought readers on wild, player-driven odysseys filled with shocking, memorable scenes. Chaosium’s Call of Cthulhu TTRPG shares a lot in common with CYOA books in that regard.

While Call of Ctuhlhu is largely designed as a multiplayer game – think Dungeons & Dragons, but with horrifying alien creatures and space gods – it’s also one of few tabletop gaming experiences that includes a separate solo mode for players who’d rather journey alone, or those who don’t have friends interested in the tabletop scene.

As a former Choose Your Own Adventure lover, the solo story included in the game’s newly revamped Starter Kit, Alone Against The Flames, was as nostalgic and entertaining as any story from childhood – and instantly grabbed me in its opening scenes.

Alone Against The Flames is designed to educate players on how to build a gamified narrative, with each story beat separated into scenes and subsequent actions. You start as a template (or player-designed) character who takes a train trip to the town of Arkham, a haunted locale that’s often at the centre of H.P. Lovecraft’s monster mythology (on which Call of Ctuhlhu is based).

What follows is a tense ride through the gloomy town, where the player character meets skittish townsfolk, and comes face to face with some of the worst horrors of the Cthulhu legend.

Read: Where in the world is your perfect TTRPG group?

Each story beat is dotted with challenges that require a dice roll to solve. Do you have enough strength to pull your luggage from the overhead carriage? Do you have the hand-eye coordination to edge your way around a precarious structure? Depending on your dice roll, the story may lead you in one direction or another – much like the Choose Your Own Adventure series. There are endless possibilities, and no ‘correct’ way to conclude the game.

Instead, you journey forward making tense choices, with each unfolding the narrative beats. Do you ask a strange person in Emberhead about the goings in the local general store? Do you forge your own path, and attempt to enter the town hall on your own? Do you find solace in the local church?

Each prompt will send you to another scene (by page flip), where you may encounter any number of threats (or blessings, if you’re lucky). But just like the Choose Your Own Adventure series, there are just as many risks as there are rewards – and you can easily whittle down your life points if you make a bad dice roll, or if an overpowered creature comes stumbling out of the woodwork.

The excitement is in the chase, and in seeing what arrives with every new page.

Alone Against The Flames is technically an introductory adventure – one that allows players to develop their own flowing narrative when playing with friends, and gain an understanding of how gameplay works in this extremely popular TTRPG. But despite being a simple intro, it works extremely well as a full-scale adventure filled with surprises. It gives you a taster of Cthulhu lore, introduces you to the basics of gameplay, and helps build your characters – all while pulling you along on a creeping horror journey.

Thumbing through each chapter and making your way through Arkham feels a lot like travelling through a spooky childhood storybook, with the layer of gamification helping to add stakes and chance to every character-driven decision. With the plot unfolding at a measured pace, players are encourage to forge ahead and accept their fate, no matter the consequences.

Occasionally this means a dice roll will lead you to your doom, but that’s the fun of Call of Cthulhu. If you burn to death, or bleed out, or meet a rabid bear, you can try again and make different choices – some of which may allow you to survive.

If you fail, you can play the adventure over again, and you’ll likely discover new pieces of dialogue, new clues, and new weapons on the way.

The Alone Against The Flames source book, included in the official Call of Cthulhu Starter Kit, is an excellent and anxious adventure – one that’s sparked a voracious appetite in me. As a solo tabletop gamer, it’s rare to see a TTRPG that caters to individual players, and even rarer for these adventures to be so engaging, even without the roar of companions by your side.

Each scene lays out new surprises, and dives deeper into that twisting, sanity-driven horror that the Call of Cthulhu and its adjacent franchises (Arkham Horror, Eldritch Horror, Mansions of Madness, Unfathomable) has become known for. While it can get gnarly – deaths tend to be gruesome, and lavishly described – the frantic narrative is quick to get its hooks in.

While this isn’t the ‘primary’ gameplay mode of Call of Cthulhu – multiplayer scenarios require a ‘Keeper of Arcane Lore’ to guide the action in a story inspired by source material – it was the version of the game I was most drawn to, given its story depth and lack of reliance on large player groups.

It can be extremely difficult to wrangle friends for a multi-part gaming session, particularly if you live far away or have adult responsibilities. But with hearty support for solo players – and plenty of adventures for singles – Call of Cthulhu is a rare TTRPG that caters to all types of players.

In recapturing the glee of the Choose Your Own Adventure days, Call of Cthulhu carves out an extremely important and engaging niche in the tabletop gaming world. Whether you’re in it for the nostalgia, or you just love a creepy, unfolding horror story, Alone Against The Flames is a brilliant introduction to the haunted world of Arkham, and the deranged beasts of H.P. Lovecraft.

A copy of the Call of Cthulhu Starter Kit was provided and played for the purposes of this review.