Big Brain Academy: Brain vs. Brain is a mini puzzle game that'll fry your cranium and cause chaos with your friends.
Leah J. Williams 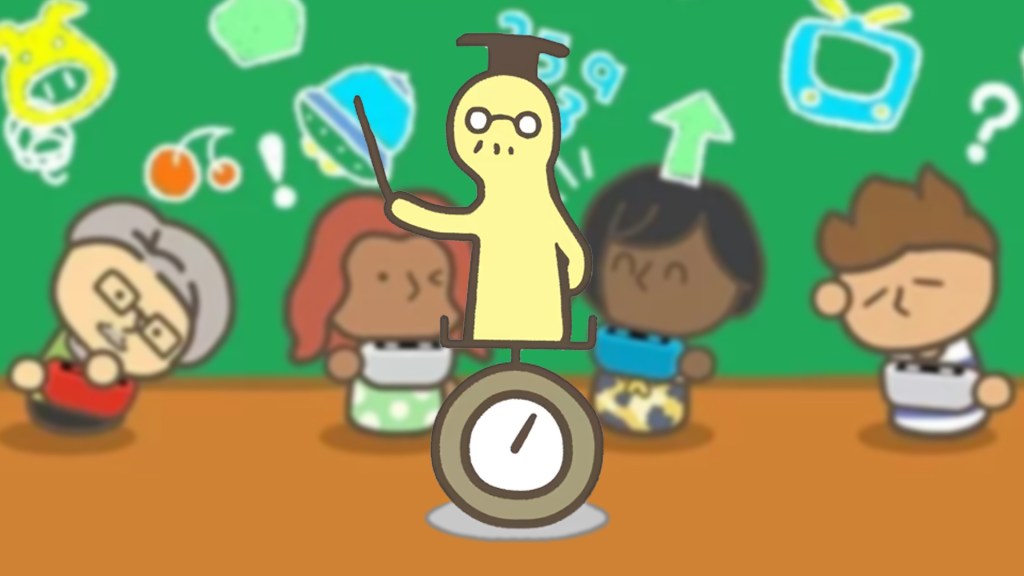 I grew up in a golden age of educational games, in a gaming landscape ruled by Brain Training and Big Brain Academy on Nintendo DS. For a young child obsessed with sudoku and crosswords, these games were my lifeblood. They entertained me through car rides, boring adult parties, and long nights when I wasn’t really supposed to be up playing them. In 2021 I like to use my brain a lot less — and it meant Big Brain Academy: Brain vs. Brain proved to be a surprising challenge, despite the game being designed for younger audiences.

The set-up here is simple: you’re thrown into a classroom and told to play through a series of timed ‘practice’ challenges. There are 20 unique brain-teasing activities in total, and a variety of skills you’ll need to master with each.

One mini-game asks you to identify items based on their shadow. Another instructs you to pop balloons in ascending order. Then there’s a mini-game that asks you to choose the right direction to place train tracks, and another that test your mathematical knowledge.

Once you master these, you can unlock ‘super’ challenges that’ll stretch your brain even further, and force you to use those muscles that you usually set aside for your workday. Each mini-game requires quick, lateral thinking, and a fair amount of maths that had me near tears. Regardless, the challenges are entertaining and work well as solo brain teasers or frantic multiplayer competitions.

Eventually, you’ll be asked to test your skills to find out just how ‘brainy’ you really are — and it’s here that the game will pass vital judgement on your analysis and evaluation skills. Personally, I was very proud to score a whopping 3,651 on my first test, landing me a highly-coveted ‘S’ score.

But while the game does provide brain-stretching challenges like in Big Brain Academy titles of the past, instead of providing additional depth in the shape of daily exercises and tips to improve and ‘train’ your brain, the primary difference in this version of the game is that it’s structured and built around competitive multiplayer.

You can certainly get away with playing it solo, but there is a limit to the activities there – at a certain point, you’ll be pushed towards battles, rather than focussing on your own strengths.

No matter how well you do in the game’s tests, this battle mode forces you to think even harder, putting your mushy brain matter to its absolute limit as the stress of competition ramps up the pressure of each challenge.

In multiplayer mode, you’re put into timed battles as you attempt to use your analyse, identify, memorise, compute and visual skills to the test in player vs. player showdowns. It’s not just your brain you’ll be fighting with — it’s also your pride, and your ability to claim the highest IQ amongst your friends.

Up to four players can go head-to-head, tackling the same challenges you can find in practice mode (there’s also a ‘ghost’ mode for solo players, which pits you against an AI opponent).

Multiplayer mode is fast-paced, rapid-fire, and makes you pivot from strength to strength with every round. While the mode does feel removed from the original Big Brain Academy games, it’s still entertaining and can really get your heart racing as you rush to figure out whether images are giraffes or polar bears, or how to work an analogue clock.

But sadly, there’s not much else to Big Brain Academy: Brain vs. Brain beyond these modes.

There’s no real ‘enrichment’ like in titles of the past, and the mini-game lineup is relatively scarce. Multiplayer, ghost modes and ‘super practice’ rounds mean there are technically plenty of things to do, but the enjoyment runs out fast once you’ve had your fill of each of the title’s 20 mini-games.

The games will make you think, and stretch the limits of your noggin with a lineup of complex mental challenges — but only to a point.

The small variety of activities and a lack of focus on personal enrichment holds the game back from feeling like a complete Big Brain Academy experience. Multiplayer mode is a stressful joy, and conquering challenges is satisfying, but the excitement and stimulation of Brain vs. Brain doesn’t last long.

A copy of Big Brain Academy: Brain vs. Brain for Nintendo Switch was provided and played for the purposes of this review.