Bear and Breakfast is a surprisingly good mix of a B&B management game and a commentary on the human condition.
Christie McQualter 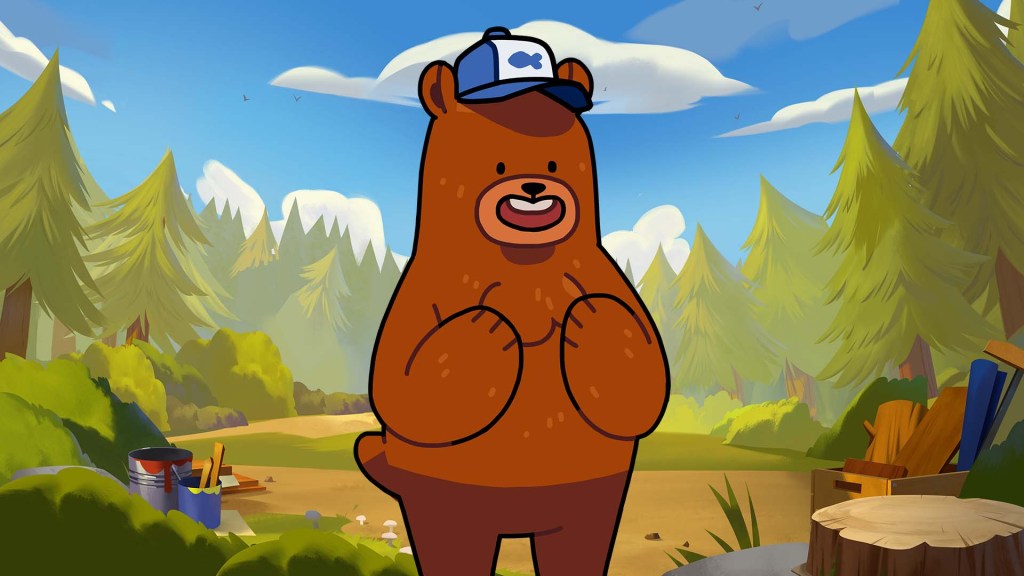 There’s a bear wearing pants and a trucker cap decorating your hotel room while you sleep, but there’s nothing weird about it, I swear. He’s just single-handedly running a chain of bed and breakfasts while trying to solve the major economic and environmental issues the world is facing – and making friends along the way too.

Bear and Breakfast is a life sim B&B management RPG where you play as Hank, a wide-eyed brown bear, who quickly goes from living a simple life in a woodland cottage with his mother and two best friends to being a well-travelled property tycoon.

When Hank’s mother asks you and your besties Anni and Will to venture out of The Thicket for supplies one day, it becomes apparent that the Valley beyond your little pocket of safety was once occupied by humans. It has fallen into a state of decay, after being ravaged by fire, so only animals and a few humans roam the wastelands now. Bet you didn’t expect a game about a bear running a bed and breakfast to be lowkey post-apocalyptic, did you?

You meet Fin, a stuffed shark with a speaker strapped to it, who with quick wits and an opportunistic approach, tricks Hank into working for the conglomerate Pawn Voyage to franchise a chain of B&Bs, with the goal of bringing human tourists back to the Valley.

You’ll explore the Valley on foot, meet new friends, scout and repair new locations for hotels, collect building materials and pick up trash to trade for furniture from Took the raccoon (is that an Animal Crossing reference?) to build your empire.

When you find a new location for a B&B, you’ll need to clean it up and restore it to serviceable condition, as well as build and decorate rooms before assigning guests to them. This becomes a bit monotonous once you get familiar with the formula, but the interior design element involved is enjoyable nonetheless.

Guests need to be matched to rooms based on their requirements – factors including comfort, decorations, hygiene, etc. Additionally, there may be requests for specific drawcards in each location, such as a distillery or a campfire. There are five hotels to unlock around the Valley, and each will add new variables to the mix. You only unlock the ability to cook – that all-important breakfast in the equation – around halfway through the main story, and it gradually becomes more challenging to juggle all your priorities.

You need to strike a balance between these management elements and completing main story quests, because you can only progress so far in one facet before hitting a roadblock in the other; they’re cleverly designed to go hand in hand.

Along the way, you’ll meet a variety of the Valley’s animal inhabitants – most of whom are certifiably insane – who will send you on a series of fetch quests before they decide that you’re friends. There’s a clear nihilistic tone to everything they say, but Hank is too naive or intentionally ignorant to understand. This makes for some genuinely hilarious dialogue.

Every character in Bear and Breakfast seems to be either weighed down by the meaninglessness of existence or ridiculously self-involved to the point of being out of touch with reality. Ipswitch, the turkey who works at the service station, believes that ‘striving towards any achievement is like trying to mop away the ocean’. Meanwhile, Gus the opossum prides himself on being a bad guy so much that if you compliment him in any way, he will fly off the handle.

These animal characters are so nuanced that even though they possess negative qualities and unkind character traits, it’s amusing to try to unravel what makes them tick and maybe even see the nice person (animal) beneath the facade. The details of their personalities are drip fed to you between quests and it motivated me to slog through the often repetitive quests, just to catch another snippet of priceless dialogue.

Fin frequently takes jabs at Hank for his intelligence (or perceived lack thereof) and spits out nonsensical platitudes that are secretly sales pitches for other scams. You get the sense that there’s something sinister behind the admittedly already suspicious exterior.

There are hints at the moral issues of bringing humans back to the Valley, but it all seems to go over Hank’s head. The animals see the return of humans as beneficial because it will bring trash (which is a currency for them) and it will make the Valley feel more lively again. But you can’t help but feel a growing sense of unease about the whole thing.

Read: Is violence against virtual animals an ethical issue?

I had a mental tug-of-war over who is taking advantage of who. Are the humans stupid for paying money to animals to stay in poorly-renovated hotels? Or are the animals naive in giving up their serenity in nature for trash? It was food for thought, especially since I was active catalyst for the change.

Unfortunately, my largely enjoyable experience of Bear and Breakfast was punctuated by a few major technical issues. One bug had me stuck in a patch of weeds on the ground (which you can normally walk through), unable to escape no matter which way I turned. After trying everything to fix it, I ended up having to start a new game because the autosave feature ended up trapping me there, with no earlier save to revert to. I then had to replay a few hours of the game to get back to where I was up to, which was frustrating, to say the least. Even after that incident, I found that I often got caught on objects while walking, so I turned off the autosave just to be safe.

Other issues included a glitch where I wasn’t receiving money when guests checked out of my hotels – luckily, rebooting the game fixed this – and another where my game got stuck in an infinite loop and eventually crashed while I was building my grand ski resort. These incidents cost me a few additional hours of valuable playtime. It felt like every time I was just starting to forget about the last setback, something new would pop up to interrupt my enjoyment.

Bear and Breakfast is a unique management sim with memorable characters. Roleplaying as a bear who flips abandoned old B&Bs is unexpectedly entertaining. The dark, existential humour somehow manages to make a depressed turkey feel relatable. But I suspect the game will be much more enjoyable to play once the kinks have eventually been ironed out.

The PC version of Bear and Breakfast was provided and played for the purposes of this review.