Battlefield 2042 Review – Everything and nothing

Battlefield 2042 attempts to distil everything about what first-person shooters have become in recent times, while also not committing to any single vision.
Nicholas Kennedy 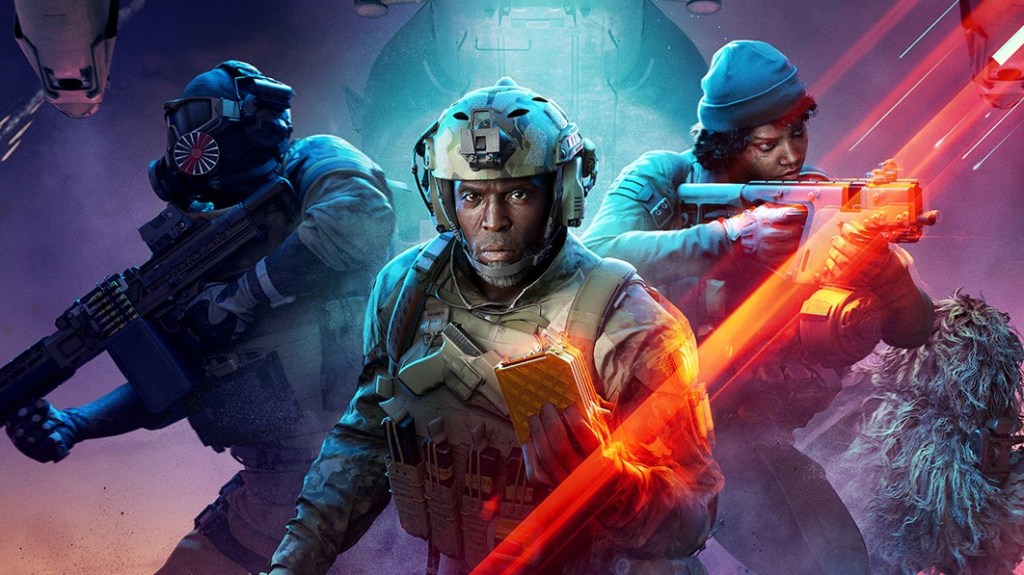 ‘This is basically Hunt: Showdown‘ says my squadmate as the Battlefield 2042 press briefing doles out the what, where and why of one of 2042’s new modes, ‘Hazard Zone’. It’s a Call of Duty: Warzone-esque battle royale mode where squads of four compete for ownership of randomly spawning data drives across a map.

The squad murmurs in agreement, and discusses other touchstones that the 2042 hands-on event has called to mind. Made up of some full-time livestreamers, shoutcasters (esports commentators), and myself, the lowly journalist; still chained, Prometheus-like, to the written word, I initially felt out of my depth in the company of genre-dedicated content creators.

Initially being the operative word here, as I was about to get an anatomical rundown of the state of first person shooters; and what better dissection than Battlefield 2042.

To play a first person shooter at any meaningful level today has started to feel like playing a genre, rather than playing any particular game within it. Call of Duty: Vanguard was apparently a ‘dead game’ mere days after launch; uninstalled after two days, my fellow squadmates told me. The ghosts of Escape From Tarkov, Squad, and prior Battlefield releases haunt the structure, atmosphere and gunplay of 2042, too. Rainbow Six: Siege and Warzone are pillaged for their loadout mechanics, and the aforementioned Hunt: Showdown is butchered and scrapped for parts for ‘Hazard Zone’.

The more time I spent with Battlefield 2042, the more it began to feel like an answer to various game design questions that have come to characterise the first person shooter genre since the release of Battlefield V in 2018 and the ascendance of Call of Duty’s free-to-play mode, Warzone.

If you’re anything like me, perhaps ignorance is bliss when it comes to 2042. My involvement with the series extends to the fact that I thought it was really cool that Battlefield 2: Special Forces had night vision, and the Battlefield V stole the majority of my evenings throughout early 2021, because it was Xbox Game Pass.

The maps of Battlefield V are big and handsome and the game does a good enough job of tricking my brain into thinking, ‘haha maybe war is fun actually,’ for a few minutes at a time, at least until I get sniped by a spin-jumping Japanese admiral in the streets of devastated Rotterdam.

2042 became similarly acquainted with the dopamine nerve centres of my brain during my time with it. Returning to a modern setting with a near-future twist, guns crackle and tank barrels thunder much like they always have throughout the Battlefield series. Encounters transition easily between vast open terrain and intimate, claustrophobic settings with an ease that has come to characterise the ways combat plays out in an average Battlefield match.

If you’re familiar with game modes like Conquest and Breakthrough, mostly everything is still here, with the big changes resting mostly in the combat roles. Battlefield 2042 adds an extra layer of complexity to class loadouts via different specialists, which allow for abilities such as long range hacking and enemy marking, alongside equipment like recon drones and grappling hooks. Players can customise loadouts independent of these unique specialist skills, and I expect finding combinations that sing (or deserve nerfing, take your pick) will inform much of the meta discussion of Battlefield 2042 in the weeks and months after launch.

However, this has a diluting effect on the identity of 2042, as combat role strengths, weaknesses and synergies have always undergirded the way that players engage with the maps, game modes, and each other. This new class loadout system seems to have a far more individualistic view of players than the series’ usual collective one.

It’s strange to go from seeing players dump piles of medkits and ammunition near the choke points on Battlefield V’s ‘Operation Underground’ map, to being revived and resupplied maybe… twice, during my ten hours with the game.

Beyond the stables of Conquest and Breakthrough (referred to in-game as ‘All Out Warfare’) lay ‘Hazard Zone’ and ‘Portal’, two truly new game mode additions. Loading into our first round of Hazard Zone, I was uncharacteristically confident in the ability of my squad of Tarkov-hardened players to see the full gameplay loop on offer..

My confidence was misplaced.

Audio design in Battlefield 2042 is a strange beast, with sounds emanating weirdly in a way that makes footsteps and gunfire hard to place in relation to your position. For maps that are supposed to be the site of 128 players-worth of combat, the soundscapes of 2042 are weirdly muted and muffled. In more intimate situations, a single enemy can sound like they’re approaching from any number of positions at once; however, in the case of our doomed initial expedition into Hazard Zone, the enemy were just on the other side of some concrete barrier. Popping up and cleaning us out in a moment that felt part-ambush and part-dumb luck, knocking us unceramoniously back to the matchmaking mode.

Your ultimate success in Hazard Zone depends on your ability to make it to one of two timed extraction points on a map, which occur at staggered times. Miss the first extraction (it is a very narrow window) and you’ve got a few more minutes to survive your journey to the next extraction location, hopefully with data drives – collectibles which spawn randomly across the map and net you points at the end of each round – in tow.

Data drives successfully extracted during Hazard Zone are converted into something called ‘Dark Market Credits’, providing the fuel on which the metagame of Hazard Zone runs, allowing you to buy upgrades and equipment to take into future rounds of Hazard Zone. Much of the equipment available directly increases the amount of credits you get for killing enemies or extracting drives by percentage amounts, increasing your funds to spend on more credit-gaining upgrades. Round and round it goes.

The fact that the metagame of Hazard Zone doesn’t extend to any other part of Battlefield 2042 seems to imply it would be easily carved out – and, I’m just spitballing here – as a stand-alone competitor against something like Call of Duty: Warzone, for example. Keep an eye on that roughly 12 months from now.

The remaining mode, Portal, seeks to be all things Battlefield at once – a sort of band aid solution if diehards of the series are put off by the reworking of the formula that 2042 undergoes, via a web-based game builder which allows complete customisation of maps, modes, guns, vehicles, and other minutiae; entire eras of warfare are reduced to action figures that you smash together on your childhood bedroom floor.

At a deeper level, there are impressive logic and scripting functions which allow creators to drill down and create entire new game modes. There are factions, weapons and six remastered maps from previous entries in the Battlefield franchise too, and, credit where credit is due, Portal is a fun mode in practice.

‘This is going to go crazy on community nights,’ pipes up one of the streamers on my squad as they jump five times in order to reload their rocket launcher, owing to the game mode ‘Rocket Jumpers’ that we’ve been dropped into.

Much of the spoils of a mode like Portal will come in the weeks and months after launch, but even with the relatively brief four hours I had with the game, it was clear developer DICE had put in the work to create something actually worth engaging with,

All in all, Battlefield 2042 is a complicated offering. Modes like Conquest and Breakthrough have been compromised severely in order to make way for a new class system that only makes sense in one portion of the overall 2042 package.

Hazard Zone is a fun stretching of the Battlefield formula, but it’s a strange, siloed metagame, and the fact that it’s clearly competing with other hardcore and battle royale titles, rather than complimenting other elements of 2042, highlights the ways in which 2042 is somewhat at odds with itself.

It’s possible that Portal tips the scales over the long-term lifespan of the game as enough of an experimental effort in remastering old Battlefield entries, while also giving the community a powerful toolkit to make their own fun. But even that mode is a clear abdication of creativity on the part of DICE.

In wondering what a Battlefield game looks like in 2021, after walking away from my time with 2042, it feels as though the game is still trying to answer the same question.

Battlefield 2042 is trying to be a distillation of what the first-person shooter genre has become in recent times, while also not committing to any single vision, let alone one that Battlefield can claim ownership of.

A PC version of Battlefield 2042 was provided for the purposes of this review. The game was played in multiplayer sessions arranged by Electronic Arts over the course of three days.