Despite a strong pedigree and interesting concepts, Babylon’s Fall is a boring, laborious, and unfulfilling action game experience.
Percy Ranson 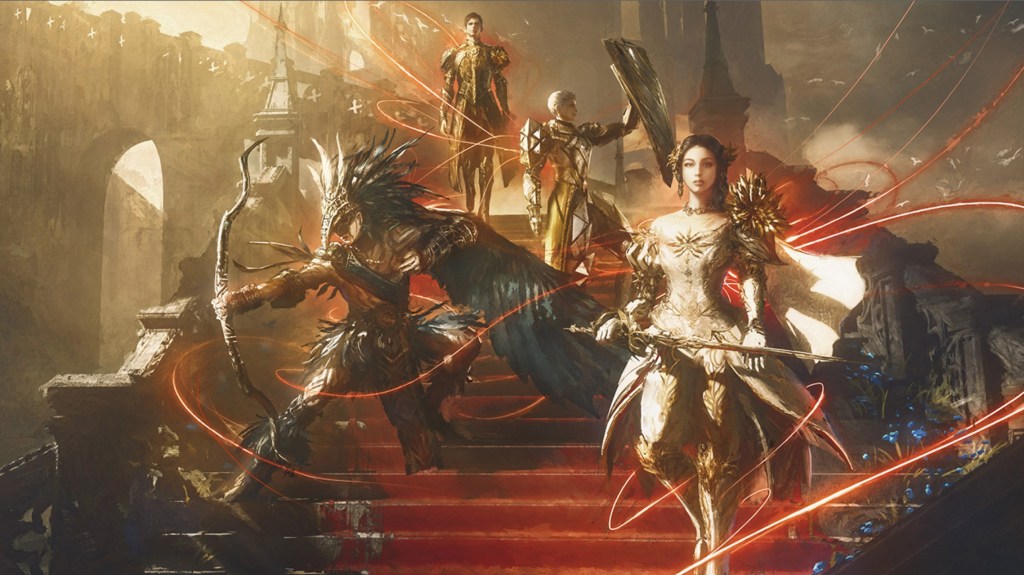 Babylon’s Fall is an intriguing co-op action RPG from PlatinumGames – developers known for their prowess in the genre. You play a Sentinel, an enslaved soldier bound to service by a ‘Gideon Coffin’ that grants you supernatural powers. Your challenge is to ascend the Ziggurat, a vast tower that houses technological marvels, wondrous sights, and ferocious foes. But while the game has some nice ideas and a clear-intentioned art style, Babylon’s Fall underperforms in every avenue, resulting in a boring, laborious, and unfulfilling live-service experience.

The Fall of Babylon

Babylon’s Fall does not make a good first impression. To begin, you choose between three factions for your Sentinel, determining your starting equipment and general aesthetic – Huysians are lightly armoured sword-wielders, Agavians are juggernauts with hammers, while Geleilions are spry, garbed in furs and feathers, and wield bows. Babylon’s Fall implies that your choice of faction will have a similar impact to a class in an MMORPG, with descriptions that fit roughly into the ‘holy trinity’ of RPG class design – tank, healer, and damage dealer. In truth, all three factions can mix and match their weapons equally with no functional gameplay difference. The distinctions are purely cosmetic.

The character creator itself is also sorely lacking in any meaningful diversity. If you’re hoping to look anything other than white and generically rugged/delicate, you’re going to be disappointed, as Babylon’s Fall has no interest in representing you accurately. I routinely fall into the trap of painstakingly crafting my characters over the course of thirty to forty minutes, but with only bland options available I was out of this character creation in less than five.

Babylon’s Fall is also visually underwhelming in a way that feels jarring. When I opened the character creation for the first time, I immediately backed out and double-checked my graphics settings – had I accidentally set it to performance mode? Was there something wrong with my drivers? It was a ‘no’ on both counts. With all settings on maximum, Babylon’s Fall has the visual clarity and quality of an early Playstation 3 game – and clarity is the important word here, as the choices in regards to art direction actively hinder readability.

The game attempts to emulate a classical painting in its art direction – as though you’re looking at art in motion. Colours are applied in streaks and splodges, with obvious blending and a thickly textured look to character models that actually could be quite striking. But, in practice, it leaves everything looking muddy and indistinct.

As the first cutscene rolls, a screen filter is applied that covers the visuals with just-barely perceptible streaks of thick texture, emulating an art technique known as impasto. Characterised by heavily applied paint built up onto a canvas, Impasto is most often used to add depth and weight to a piece, the layered paint acting as a physical contrast that draws the eye.. Applied with intention, impasto visually enhances the important details and allows non-important ones to fade into the background. Applied as a generic filter to already messily-blended gameplay, the impasto filter on Babylon’s Fall looks like someone left streaks across your monitor.

It’s visually distracting, and cannot be turned off in any way. It only serves to make it that much harder to achieve visual clarity mid-combat.

Previous PlatinumGames entries have made excellent use of clean graphic design and well-contrasted colour choices in order to allow the visual clarity necessary for their fast-paced style of action. Babylon’s Fall, on the other hand, uses blue projectiles launched from blue enemies that completely fail to stand out from each other. When you’re attempting to simultaneously dodge incoming enemy projectiles, identify wind-up animations that signify attacks, and avoid area of effect markers, visual clarity is vital. It’s sorely lacking here.

PlatinumGames have long proven themselves to be masters of action combat, having refined their take on the genre over years and through fantastic games like Nier: Automata and Bayonetta. Stylish and fluid combat that’s accessible to newcomers but rewards skilled performance is the company’s speciality, and a co-op title with that style of gameplay sounds like a dream come true.

Unfortunately, Babylon’s Fall does not achieve anything close to that of previous PlatinumGames entries. It’s a grindy button-masher with enemies that soak up ludicrous amounts of damage. There are also serious scaling issues when it comes to solo vs. co-op play, as while you take less damage in solo mode, the enemy health appears to be unchanged. Multiple times, I would attempt to complete a level solo, but have to abandon a mission half-way due to sheer boredom as my attack strings barely chipped away at the colossal health of the enemy.

Things are a little better during co-op, but combat is still held back, as there’s seemingly no functional synergy available among teammates, even when attacking the same enemies. You could attempt to act as a tank for your squad with ranged support from a bow-user, for example, but there are no abilities that aid this. Information about where enemies will focus their attacks seems completely absent, so you’d best hope the foes randomly choose to only attack your tank.

Additionally, the game lacks ‘setup’ and ‘payoff’ mechanics that could provide a feeling of teamwork. Knocking an enemy in the air with a hammer, allowing a swordsman to lock them into an aerial combo, followed by a sniping shot from a bow-user – I was hoping for something along these lines, given the quality of combat in prior PlatinumGames titles, but nothing of the sort is present here.

Combat just feels slow and clunky, in part because movement often feels sticky. There’s a particularly frustrating minor delay when you dodge and jump, and I didn’t note any capacity for advanced skill-expression through techniques like animation cancelling. Enemies also frequently knock you down for painfully long moments of forced downtime, which they fail to capitalise on strategically. Ultimately, difficulty in Babylon’s Fall is found in the exhausting durability of your damage-sponge opponents, rather than any tactical or skill-based challenge.

Babylon’s Fall does have a few interesting ideas, like the arsenal of weaponry you bring along. For every mission, you select four weapons that each correspond to a type of attack – two weapons act as your light and heavy attacks, and another two are used for ‘spectral’ attacks. Each weapon type functions differently, and in theory, you have a tool in your arsenal for each threat you face, allowing you a great freedom of variety.

In practice, I found that every challenge I faced was easily felled by button-mashing, and while the weapons did feel distinct, at no point was I in a situation where I felt that one weapon was particularly superior to another. Babylon’s Fall does have a variety of enemies, some of which have different tactics that you need to compensate for in order to proceed – shield-wielding foes must be struck from behind, ranged enemies have to be watched constantly, and bosses will sometimes launch ‘bullet-hell’-esque attacks.. These do provide some strategic challenges, but not enough to make the core act of combat consistently engaging.

While customising and optimising your build is possible in Babylon’s Fall, it takes a huge amount of grinding through nearly identical missions to make that possible, and the design of the system doesn’t offer any notable twists on the gear-looting formula that makes it a compelling choice over any of its (often free-to-play) competitors.

One point that really needs to be addressed is that Babylon’s Fall is a full-priced title, at AUD $100 for the base version, or AUD $160 for the digital deluxe. Despite this, the game was launched with a Battlepass (free and premium) and cosmetic microtransactions that are shoved in your face almost immediately upon starting the game.

Were Babylon’s Fall a free-to-play experience with optional in-game purchases, this would be understandable but with a premium price tag, there’s an expectation of quality that is simply not delivered here, especially from such an experienced studio and publisher duo as PlatinumGames and Square Enix.

With lacklustre combat, serious flaws in visual design and clarity, and a complete absence of synergistic team-based gameplay, Babylon’s Fall is a disappointing attempt at a live-service game.

A PC version of Babylon’s Fall was provided and played for the purposes of this review.