Why do the elves in Dota have Australian accents?

All the elves in Dota: Dragons Blood are (spoiler) all Australian and we don't know why – so we asked ABC language researcher, Tiger Webb.
Jini Maxwell 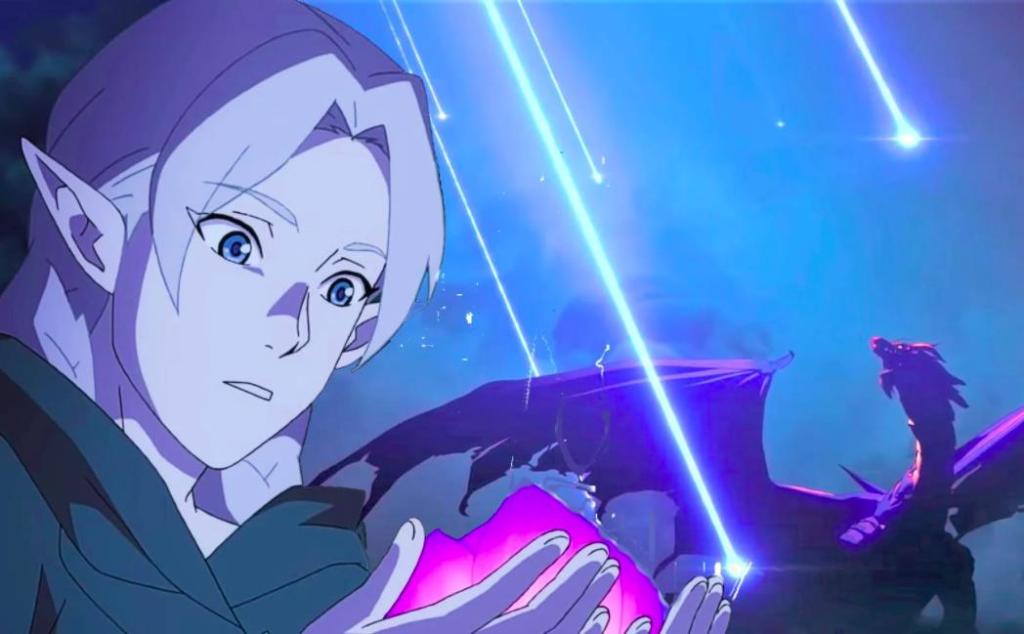 In March, Dota: Dragon’s Blood was released on Netflix. A Korean-American production produced exclusively for Netflix, Dragon’s Blood is based on Valve’s popular multiplayer online battle arena videogame, Dota 2. For fans of the game, it’s a fun aside, and for anyone else, it’s a solid fantasy romp with swords, magic, prophecies, the occasional unexpected elfin group sex scene (!), and, of course, dragons.

A classic high fantasy setting was the last place I expected to hear the distinctly ‘non-rhotic’ (more on that later) sounds of an Australian accent, but here we are: the elves in Dota: Dragon’s Blood, are distinctly Australian. To say this took me by surprise would be an understatement – but why should it take me by surprise? Australia is a hub of film and television production. Some of the world’s most famous actors, from Margot Robbie and Chris Hemsworth to Hugh Jackman and Nicole Kidman, are Australian  – but they rarely sound that way on-screen. Why was it so unexpected to hear an Aussie accent out of the moves of a cartoon elf, and why was it only the elves who sounded Australian?

Dota: Dragon’s Blood isn’t the only animation to get around Australians: when the videogame Final Fantasy XIII was localised from Japanese to English, the elves were given Australian accents. Likewise, in the English localisation of Yugi-Oh! one of Dartz’ henchmen, Valon, has a strong accent that was widely interpreted as Australian on release – though there is debate about whether or not the accent was intended to be Cockney.

READ: The burden of building someone else’s fantasy world

The elves of Dragon’s Blood aren’t the only Australian’s in Dota canon, though they are the only ones in the show. Dota 2 has also introduced a new hero, Hoodwink, who is a squirrel thief with an Australian accent.

Personally, I’m starting to sense a theme: the Australian accents are attributed to characters who are, for a better word, uncivilised.

I reached out to ABC language researcher, Tiger Webb, to get his perspective. He confirmed my suspicions that, even to someone who isn’t well acquainted with the show’s lore, the decision to give Dota’s elves an Australian accent, in direct contrast to the rest of the cast, ‘fits with ‘longstanding conventions of elves as representative of “the other.”‘

Accents aren’t neutral: they are social and cultural, and on-screen, particularly in genre screen media, they’re often used more to suggest an archetype of caricature, than to help flesh out a full character.

‘In a 1997 study… only 2% of characters in children’s movies were found to speak with non-US / non-UK English varieties.’

This is particularly stark in Dragon’s Blood. In an accent-scape dominated by English accents (for nobles), and American accents (for tough guys), the Australian elves of Dota: Dragons Blood are wild outcasts, sexually promiscuous and mysterious, with minimal connection to broader society.

Is this the character of Australia to an international audience? What do people hear, when they hear an Australian accent?

As a brief aside: the accents in Dragon’s Blood aren’t naturalistic, and the characters aren’t voiced by Australians, so first I had to establish what I was actually recognising as a familiar Australian accent. I sent Tiger Webb this clip, and he generously provided an accent analysis:

‘One of the more obvious features of Australian English is that it is non-rhotic: that is, Australians generally don’t pronounce /r/ sounds when they occur after vowels. So when one of the elves in that Dota clip says “You’re hurt!”, he says it like an Australian, with no /r/ sounds at the end of you’re or hurt. Because American varieties of English tend to be rhotic, they’d pronounce that /r/ sound. […] As an Australian English speaker, you can test this yourself by saying the word hurt as you normally would, and then with an over-the-top American accent. Not only is that /r/ sound present in the second one, but the vowel sounds different too!

‘Phoneticians have also observed what they call pre-lateral vowel effects in Australian English. Basically this means that our vowels do funny things before sounds like /l/. This is in the Dota clip too: when the elf says she found the Lotuses of Mene in a “pool of water”, that word pool is almost indistinguishable from the word pull. This doesn’t happen before other types of vowels: hood and who’d are rarely pronounced the same way by Australian English speakers.

‘Also, when that Dota elf water in “pool of water” she produces what’s called the intervocalic tap or flap — the /t/ sound in the middle of water is realised as a sound closer to a /d/. (In the International Phonetic Alphabet, the symbol for this sound is actually /ɾ/.) It doesn’t only occur in Australian English, but it’s relatively iconic.’

A HISTORY OF AUSTRALIAN ACCENTS ON SCREEN

Australia has been a hub of film and television production since the 1980s, but that hasn’t always meant that Australian voices make it to the screen. High grossing Australian films like Moulin Rouge and Babe adopted international settings filled with English and American accents, (Babe himself is cute, young, rascally, and American, while the older townsfolk, trapped by convention, are all primly English) and even Mad Max, perhaps Australia’s most iconic film franchise, is led in its most recent iteration Mad Max: Fury Road, by an American cast. While Furiosa will return to Australia to film this year, the film’s accent-scape is unlikely to change.

Even in Aussie classics like Crocodile Dundee that do embrace the accent, Paul Hogan’s ocker twang (and the ‘myth of the Aussie white bloke’ that comes with it) is played up for comedic effect, specifically for an audience to whom it would feel unfamiliar.

There is a vast difference in accent and lexicon between Atlanta and Appalachia — why couldn’t they handle Adelaide?’

Even Australian films feel the creep of Americanisation: the original Mad Max was actually dubbed for American audiences, creating a bizarre filmic doppelganger in which this Australian classic a) is voiced by all Americans and b) admittedly, has much better audio mixing.

The absence of Australian accents on-screen has little to do with comprehension. Webb places this absence squarely at the feet of cultural imperialism: ‘There is certainly no intelligibility argument here. There is a vast difference in accent and lexicon between Atlanta and Appalachia – why couldn’t they handle Adelaide?’

‘Australians are neither fish nor fowl: not indicative of blue-blood nobility (as with Received Pronunciation), nor as convenient a hick stereotype as Southern varieties of English.’

Webb has the facts to back it up: ‘Linguists do occasionally look at the choice of accents in animated media, such as Lippi-Green’s work on Disney films. In the 1997 study that work is based on, only 2% of characters in children’s movies were found to speak with non-US / non-UK English varieties.

The Australian accent doesn’t fit so neatly into the soundscape of classic screen media: ‘Australians are neither fish nor fowl: not indicative of blue-blood nobility (as with Received Pronunciation), nor as convenient a hick stereotype as Southern varieties of English.’

WHO GETS TO BE AUSTRALIAN?

But even in the scant and caricatured examples of international productions depicting Australian accents, Webb notes that  it’s only one kind of Australia that gets given a voice at all. There’s a more insidious dynamic at play in the conversation about cultural imperialism and language: within the broader conversation about accent diversity, it’s important to consider what is actually getting represented as ‘Australian’: ‘The elves in that clip you linked are white, and do not speak with any stereotypically Aboriginal English features. Does “Australian accent” always equal “white”?’ Webb reflected, ‘This is another issue of homogeneity when we talk about “the Australian accent”.’

He’s totally right: despite the incredible critical reception that Indigenous screen media has received, from Warwick Thornton’s Samson and Delilah to ABC’s fantasy drama inspired by Aboriginal mythology, Cleverman, Indigenous peoples are often excluded from local or international images (and sounds) of Australia.

Taika Waititi’s Thor Ragnarok is a glowing counterexample of real accent diversity: the character Korg,  played by Waititi himself, who is Māori, speaks in Waititi’s own inflection, amidst a cast whose range of distinct accents and dialects give depth to their characters and stories.

All too often, ‘Australian’ accents on screen are only attached to characters like the larrikin Captain Boomerang from Suicide Squad, who builds on the Crocodile Dundee figure of the Australian wild white bloke. Indigenous ways of speaking don’t tend to factor into popular conceptions of an ‘Australian’ accent. Even within the conversation around accent diversity, Aboriginal English is silenced.

Beyond Mad Max and Crocodile Dundee, the Australian accent is being heard in new ad interesting ways; through the meteoric rise of Indigenous filmmakers, in the upcoming reality show reality show Byron Baes, and yes, through the Aussie elves of Dota.

While the cultural imperialism of the US still drives a stereotypical approach to accent diversity, the international screen industry’s attitude to the Australian accent is starting to change. This could also be a chance for us to change our singular understanding what counts as an ‘Australian accent’ along with it.