From Discord to the front page of Twitch, Wholesome Games is changing the face of games. Wholesome Games founder Matthew Taylor tells us the full story of the grassroots organisation's strange journey to E3.
Jini Maxwell 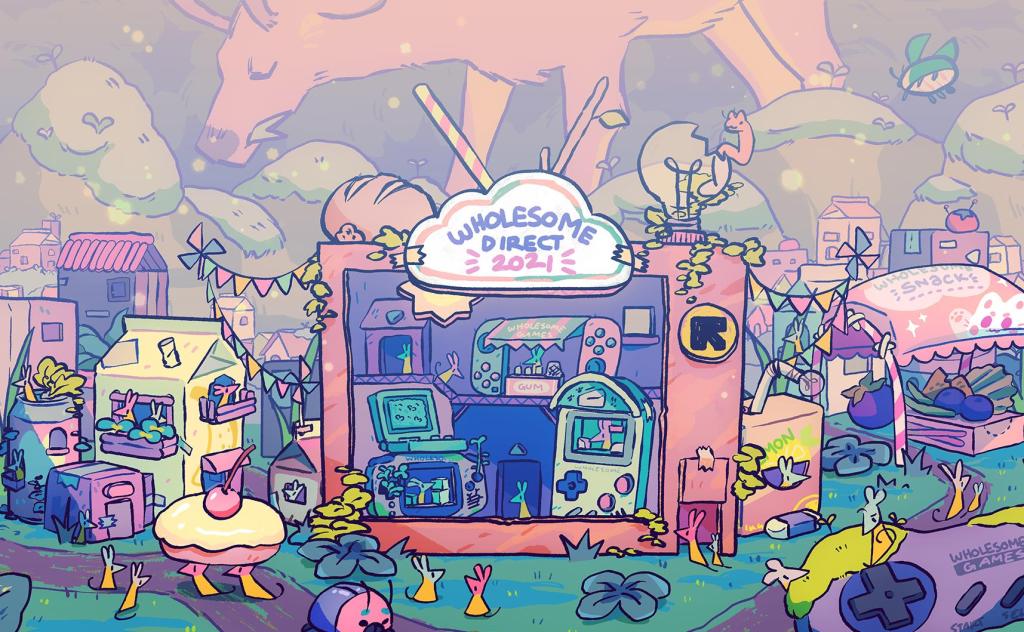 ‘We didn’t have space before, and now we do,’ might be Wholesome Games’ rallying cry. Image supplied.

During the fast-paced announcements of 2021’s digital E3, Wholesome Direct appeared on my screen like an oasis. Celebrating a variety of picturesque, gentle, uplifting games like Unpacking, Moonglow Bay, and Ooblets, Wholesome Games’ pastel-bright 2021 Direct ran for just over an hour with hosts Victoria Tran, Jenny Windom and Derrick Fields easing the transitions between 75 different trailers, a breath of fresh air between the major publisher’s announcements.

Wholesome Games has been a growing presence online lately, with a Twitter account that now boasts 60,000 followers regularly curating gentle, uplifting games, and a thriving Discord community. While this has come with its share of criticism, there’s no denying the organisation’s popularity: people are looking for smaller, more personal games experiences, which Wholesome Games are in a perfect position to provide. This year, the Direct’s impact was felt by audiences, developers, and event organisers alike: PC Gamer reported that in 2021 a third of the games showcased during E3 this year were non-violent, a major improvement from the 17% non-violent games shown in 2019 that can be attributed largely to the many gentle titles of the Wholesome Direct.

READ: Flashback: The rise and fall of Adobe Flash Player

With the Direct ultimately streamed on IGN and GameSpot via Guerilla Collective, as well as the /twitchgaming gathering day, a casual viewer could never have guessed that this sleek operation was the product of a volunteer initiative that was less than 2 years old. Nor is it evident that Wholesome Games’ meteoric rise has been powered by community effort, not cash injection.

‘We didn’t have space before, and now we do,’ might be Wholesome Games’ rallying cry.

That’s not to say that the Direct didn’t have material impacts; participating gamemakers have reported huge spikes in their Steam wishlists. The transition from facilitating an online community to having a financial impact on the lives of developers is a significant responsibility – but it’s one that Wholesome Games founder Matthew Taylor says he’s proud to shoulder: ‘It’s a big responsibility and something I don’t take lightly, but at the same time, all the pressure is worth it when I see a game like Venba [Featured in the 2021 Wholesome Direct] succeeding and the dev gets in touch to tell me “hey, we didn’t have this kind of space before, and now we do.”‘

‘We didn’t have space before, and now we do,’ might be Wholesome Games’ rallying cry.

That pretty much vertical line at the end is known as the “Wholesome Games” effect. pic.twitter.com/gdC8bLNiVD

THE BEGINNING OF WHOLESOME GAMES

Taylor has always sought out uplifting experiences in games. Having grown up with Animal Crossing and Chibi-Robo, he describes his passion for games beginning with the GameCube, where he saw ‘firsthand how interesting and entertaining games could be even with less conflict and stress.’

As peaceful indies like Ooblets and Mineko’s Night Market gained viral traction, Taylor saw an opportunity to bring the peaceful games he loved to a broader audience. He started the Twitter account Wholesome Games in 2019, where he curated and celebrated games that were gentle, welcoming, and uplifting.

His goals were simple: ‘I think originally my intention was just to celebrate them and also show that these types of games—whether they’re huge like Animal Crossing or made by one person like A Short Hike—had elements in common and deserved to be taken seriously.’

The dynamic quickly found a like-minded audience, and Wholesome Games’ Twitter following ballooned to a follow base of over 60,000, a Discord, and a series of Directs through which the Wholesome Games community continues to grow. Now, the organisation is run by a team of seven, including Taylor himself and Jenny Windon, who has hosted all of Wholesome Games’ events to date.

DIRECT FROM LOCKDOWN TO OUR SCREENS

The first Wholesome Direct took place in May 2020, as a way of providing visibility to indie devs whose work was impacted by the coronavirus shutdowns. ‘Last year after so many events were canceled due to the pandemic, we started planning Wholesome Direct as a way to give indie developers a chance to showcase their games online,’ Taylor tells me. This turned out to be a tipping point for the initiative: ‘Coordinating with over 50 developers is definitely when it started to feel more like an organization than a hobby!’

READ: The Most Anticipated Australian Games of 2021

Despite being a breakout expo favourite, the Wholesome Direct wasn’t ushered in by E3 itself. Taylor tells me that the Direct’s journey to E3 was a tale of friendship and luck: first, Guerilla Collective offered to stream the Direct on their Twitch channel as part of Guerilla Collective 2, followed by an offer from Twitch to run the Direct as part of their /twitchgaming gathering day event, which landed the direct squarely on the front page of Twitch, garnering over 560k views. The Direct itself is available as a VOD on Youtube, where it has over 86k views at time of writing; Taylor and the team have clearly tapped into a significant audience, one that has typically been underserved by expos like E3.

‘Without all that help, we probably would’ve been too scared to compete with all the other E3 events and premiered earlier like we did last year,’ he said.

This is a theme that continually arises throughout my conversation with Taylor: Wholesome Games is a community that exists to elevate artistic game developers, and in turn, the organisation’s successes have all come through the effort and support of an entire community.

While the Wholesome Direct is the organisation’s most visible success, Wholesome Games is just that, first and foremost: a community.

Taylor shaped his community with the lessons learned from other community management approaches he has encountered online: ‘Almost universally, [other online communities] had rules against harassment or bigotry, but only enforced them when it was easy, like if someone spammed NSFW images or called other members horrible slurs.’

‘Sometimes it’s a radical act to make dark or upsetting art, and sometimes it’s radical to make hopeful art in times of adversity.’

He sees blanket bans like ‘no politics’ as a limitation on a community, and hoped to develop more nuanced ways for the community to approach big topics. This was an expression of one of the fundamental values of the project: to be welcoming.

Instead, their Discord trusts in well-vetted moderators to approach topics and issues on a case-by-case basis. The community holds members to high standards of interpersonal behaviour: ‘so that, for example, one person learning how to behave doesn’t come at the expense of a marginalized person’s freedom to exist in the space comfortably.’

WHO GETS TO BE WHOLESOME?

Some might be surprised to hear that a wholesome space like this welcomes challenging topics. Inevitably, the Wholesome Games movement has attracted some naysayers, and a regular criticism is that celebrating ‘wholesomeness’ might imply a moral judgement on conflict or challenge – is it so wrong to be unwholesome?

But Taylor and the team have always rejected that kind of toxic positivity mindset in favour of informed, respectful conversations. The concept of what constitutes a ‘wholesome game’ has become a major topic of discussion online as the community grew; recently, Wholesome Games released a statement embracing that conversation too:

‘It’s subjective and we don’t want to pretend that it isn’t.

Without detracting from games that challenge and problematise, their goal remains, not to stymy conversation, but to uplift games for hope: ‘Sometimes it’s a radical act to make dark or upsetting art, and sometimes it’s radical to make hopeful art in times of adversity.’