The PAX Aus 2022 Indie Showcase represents some of the best upcoming Australian games, which you can play at PAX Rising area come October.
Edmond Tran 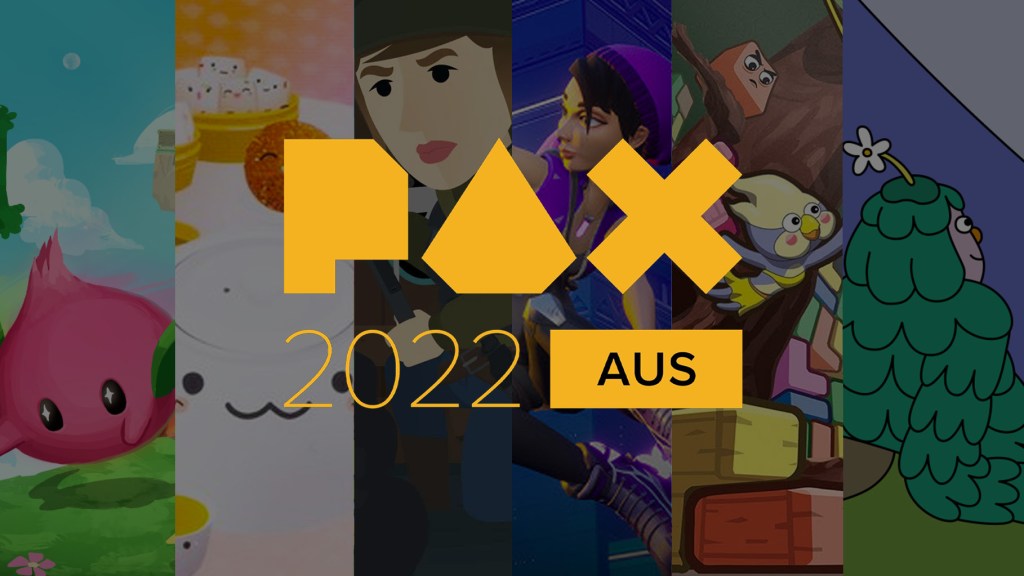 After a two-year absence, PAX Aus is finally, actually coming back to Australia in 2022. As always, the enormous PAX Rising section of the show floor will undoubtedly be one of the highlights, with dozens of fantastic upcoming independent and home-grown games on display for attendees to play all weekend.

The PAX Aus Indie Showcase will again highlight the best of an excellent bunch, selected by a panel of judges, and have a prime spot on the floor at PAX Aus 2022 – which runs from 7-9 October 2022.

GamesHub is excited to be able to reveal the Indie Showcase Winners for PAX Aus 2022. Congratulations to all the developers!

From Witch Beam Games (Unpacking) comes something completely different – it’s Tempopo, a contemplative puzzle game about planning and execution, in which you restore a harmonious garden by rescuing musical flowers across sky islands.

Developer Sanatana Mishra told GamesHub, ‘anyone who wants to immerse themselves in a charming rhythmic world with puzzles that don’t exert any time pressure should stop by to play Tempopo – especially those who like planning ahead!’

Additionally, he noted that everything in the world of Tempopo moves and harmonises to the beat of the music. ‘From environmental animations to character movement, even the timing and tone of the flowers saying, “Thank you!” when they’re rescued. The whole team is very proud of this shared achievement!’

Tempopo’s cohesiveness is certainly something that stood out to the judges this year, and it’s bound to put a smile on your face at PAX Aus.

A convention favourite, physics-based multiplayer puzzle game TopplePOP: Bungee Blockbusters is looking better than ever as it gets closer to release. Catering to a criminally-underserved genre, you’ll guide bendy animal acrobats on rubber bands to rescue their friends from a jumble of puzzle blocks.

The chaos of TopplePOP makes it a great multiplayer game for players of all skill levels to just buck up, but for those who are a little (or a lot) more serious about their puzzle games, there’s a lot of room for finesse and competition here too.

Developer Dan Graf of ArkimA Games had some tips for those who come to play TopplePOP on the PAX Aus show floor: ‘Choosing the right time to fling blocks fast and loose, or carefully stack up a precision cascade makes all the difference in battle,’ he said. ‘This tactical element is amplified in 2v2 team battles where players work together to pull off precise maneuvers or risky acrobatics for huge chain reactions, securing the lead or turning the tables for epic wins.’

Dan said that the team’s goal with TopplePOP’s design was to create a game an accessible game that could be shared as widely as possible. In addition, they hope they have a game that’s versatile enough to create a level playing field for a mix of players.

For those who like to go fast but are finding that games about blue hedgehogs just don’t cut it, look no further than Rooftop Renegade, a 2D action platformer all about hitting incredible speeds and maintaining flow. Boost through levels under constant bombardment, avoid dangerous hazards, and make split-second decisions that could mean the difference between a new personal best or a total wipeout.

Patrick Webb of developer Melonhead Games explained that the vision of the game was to make anyone who picked up Rooftop Renegade ‘feel like a speedrunner’.

‘We offer an accessible way to understand that satisfying feeling of being totally in the zone, blasting through levels at high speeds while chaining movement abilities and making split-second pathing decisions’, he said.

‘We focused a lot of care into making sure the movement feels “just right”. It was quite a challenge to walk the line between pixel-perfect platforming and momentum-driven racing, but the result is smooth control that makes it easy to get into a rhythm. This is all supported by dynamic music that really picks up as you get going!’

PAX Aus attendees can look forward to playing Rooftop Renegade in either single-player or multiplayer modes on the show floor, where the latter is all about finding crafty ways to deny that ‘flow’ feeling from other players.

Imagine if The Office was thrown in a blender with Lord of the Rings and South Park, and the resulting product had a Castle Crashers-style video game adaptation. That’s essentially what you’ve got in Box Knight from We Made A Thing Studios.

Full of unsettling enemies, cartoon gore, and an engaging combat system, Box Knight puts its own weird twists on the beat-em-up RPG and rogue-lite formula, with a bizarre and unique personality.

One thing creative director Tom Phillips can’t wait to show PAX Aus attendees is the game’s humour: ‘We absolutely love this weird world, and both friend and foe alike have a wonderful amount of character, charm and silliness’.

There is nothing better than discovering a great new mobile word game to obsess over day after day. Your latest should be Gubbins, a friendly puzzle game where players place tiles to construct words, with the help and hindrance of kooky little friends called ‘Gubbins’.

Developer Darcy Smith describes Gubbins as a ‘rouge-lite word game’, which is already a killer hook. But one of the best things about Gubbins is its strikingly quirky aesthetic – Think The Beatles’ Yellow Submarine animated film, but a little more twee.

One thing that really surprised us was learning that Gubbins is a first-time project for many of its collaborators. ‘Gubbins will serve as our illustrator, animator and composer’s very first video game,’ said Darcy. ‘Hopefully, our bonkers aesthetic both visually and audibly grab your senses, and strike you as wholly unique!’

For those who love a good point-and-click adventure, as well as a dark sense of humour, the fantastically named Repella Fella is bound to impress you as much as it impressed us. Set in a post-apocalyptic Australia, the game features a full suite of impressive voice acting, a South Park-like animation style that perfectly suits the bizarre tone, several branching choices, and multiple solutions to its puzzles and narrative.

Graeme from the Repella Fella publishing team invites PAX Aus attendees to come and enjoy making narrative choices with absurdist outcomes, see how those choices affect the rest of the game, and then come back to replay it and see how things can differ.

‘Multiple choices, multiple outcomes, and multiple endings,’ he teases, ‘culminating in the ability for all players to vote on how and where the sequel will begin!’

‘Yum Cha is a fun, adorable and simple card game for all ages, even our grandparents love it!’ says designer Anderson Cheung. ‘Advanced players can strategically wrap up the game quickly or go for glory and maximise their possible points.’

‘Our favourite game mechanic is the takeaway card,’ he adds. ‘It can be used to maintain a lead or secure a win, at the expense of scoring big! Having the choice to either hold onto the takeaway card or discarding it is such a fun dilemma.’

Anderson suggests that Yum Cha is a fantastic game for lovers of mah-jong, and hopes that PAX Aus attendees will come and play some Yum Cha, learn about some unique Chinese dishes, and hopefully be adventurous enough to order them for real.

Any game that can distil all the excitement of a good tabletop game into a very short amount of time has our attention, and that’s exactly what The Score aims to let you do: tell a thrilling story about the heist of the century in just 18 minutes!

Steve Dee from Tin Star Games describes The Score as being like a roleplaying game, only with no gamemaster. ‘The Score was built to change how people think about roleplaying and story games, and its seems to be working!’

‘All the feedback we are getting is that it feels like a whole different kind of way to play. If you’ve ever bounced off any kind of RPG before, we think this might be your jam.’

‘You’ll go home telling everyone about the crazy impossible heist you pulled off and the twists nobody saw coming!’

If you like skirmish-style tabletop games, but you’re looking for something that’s a bit more pick-up-and-play, Pixel Star is here to scratch your itch. It’s easy to learn, with a fun dice selection and little pixel art ships, and has all the good feelings that come from pulling off great space tactics.

‘The dice action selection is where the exciting strategy lies,’ designer Lyndon Cullen-Reid said. ‘Players roll dice into a combined pool each round and take turns claiming and assigning one to their customised fleet. Keep an eye on all the actions available each round though, as you and all your opponents are taking from the same pool of dice!’

‘Claiming a die can activate unique abilities on your ships (like ramming asteroids to send them flying or shooting a lightning bolt through your enemies), while simultaneously restricting your opponent’s options for that round!’

Lyndon suggests Pixel Star is designed for folks who enjoy games like X-Wing but want a fleet they can fit in their pocket, assuring that Pixel Star still features the same kind of deeper strategy and meta of a bigger game – the perfect kind of game to bring to a busy show like PAX Aus.

There’s nothing people love more than capturing monsters and making them fight. Aethermon: Tower of Darkness is the latest board game to do that, only in a co-op roguelike manner! Choose an adorable creature companion, climb the tower, fight the bad guys and save the world!

Christopher Ng from 3rd Place Games invites PAX Aus attendees to come try out their 20-minute demo at the show, where you’ll team up with 4 others to compete for high scores and prizes – and there’s a solo battle demo for those who have a busier schedule.

‘The thing we are most proud of is our characters,’ said Christopher. ‘Visually, they are gorgeously drawn by our creature designer, Fabio – we’ve been unashamedly influenced by the art style of Ken Sugimori from Pokemon.’

‘But mechanically, we really hope people will enjoy how differently each of our 57 (and counting) Aethermon plays … Some are really weird and interesting: for example, Water cycles between over- and under-powered moves. We are even exploring a new element which accommodates players who find reading difficult … our Metal Aethermon’s special skill is to ignore the text on other cards, thus reducing language dependency.’

‘Each of our Aethermon has its own story and place in the world they inhabit, but of course, your own unique Aethermon story is the one that counts the most!’

The PAX Rising Indie Showcase at PAX Aus 2022 is proudly supported by GamesHub.