Created with the support of the City of Melbourne’s COVID-19 Arts Grants, ‘Neon Cyborg Cat Club’ is not a game so much as it is an algorithmic music performance.
Jini Maxwell 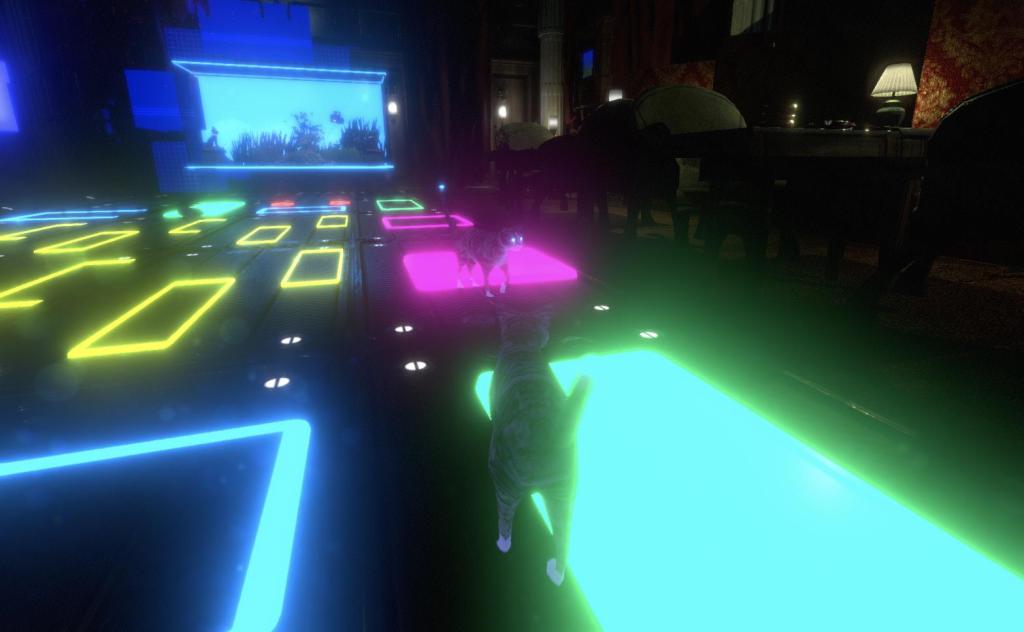 For some time now, the city has been deserted. Looking out at empty streets from your highrise window, it looks like no-one has set foot here in months. The only discernible movement in the dim room you find yourself in is a cat, walking in random patterns, and you’re grateful for the company.

Shockingly, I’m not talking life under stage four restrictions; I’m talking about Neon Cyborg Cat Club, an algorithmic performance piece that draws on developer Edwin Montgomery’s skills as a composer, performer, and sound designer. Released today, the feline musical experience is free to download for the next two weeks. It was developed with the support of a COVID-19 Arts Grant through the City of Melbourne, as an experimental reflection on digital performance, and life in lockdown.

The piece is set against the backdrop of a worryingly relatable dystopia: after the end of humanity, the only remaining signs of life in the city are their robotic feline companions, whose movements around the environment create a musical soundscape. It’s not a game that you ‘play’ in a typical sense; the audience-participant alter the soundscape that the game creates by choosing how many cats to let loose in the environment, activating musical panels in the floor as they go, and which music disc to play from. This generates a unique synth track that can be altered by the audience-player at any time.

As an interactive digital artwork, it aims to give its audience access to a sense of serendipity that many are missing while movement and travel are restricted. Montgomery explains: ‘As the cats walk, they generate an ambient synth soundtrack that reacts to their movements.

‘It’s my way of bringing a music performance to people under lockdown.’

Montgomery is composer, performer and sound designer who trained in classical composition. Their body of work is as lauded and eclectic: their 2015 orchestral soundtrack for Warhammer 40,000: Regicide earned them a nomination for Best Audio at the Australian Game Developer Awards, and this year, they scored the 2020 documentary feature Time, which won Best Documentary Directing at Sundance.

The game’s algorithmic synth score is adapted from the layered loops Montgomery would typically implement in live performance, and his heavily inspired by music indeterminacy, a composing approach championed by experimental artists like Morton Feldman and John Cage, where aspects of the composition are impacted or created by the audience, or the environment. In this case, the music is indeterminate on two levels: first, the audience-player decides how complex the music will be, and what tone it will take, and then the software generates music based on those rules. The result is a digital experience that is personal, and can’t be replicated.

While the project started simple, (‘When I began this project I had only planned to write one piece of music and create the one cityscape,’ Montgomery tells me via email), its scope quickly expanded.

The piece currently contains four different musical strains, ‘each with very different vibes and instrumentation.’ The visuals also became more complex; as the music changes so too does the environment around it, with ‘lush colour tones and changing atmospheres’ developing in response to the synths the audience chose, and the random movements of the cats.

Montgomery’s work in digital performance is only just beginning. They tell me that they’re already working on a follow-up interactive music work called Isolationist Nightclub Simulator. They describe it as ‘an online experience where the audience can create and remix music in a virtual cyberpunk nightclub setting.’ Like Neon Cyborg Cat Club, it’s a response to the isolation of lockdown that leans into 2020’s apocalyptic edge.

This confluence of digital and personal, dystopian and connected, is key to Montgomery’s work; through the dystopia, there’s a sense of hope: ‘I wanted to find moments of peace and reflection in the chaos, and found myself imagining beauty in the wreckage. I think this work not only asks audiences to do the same, but hopefully connects to the part of them looking for these same things in the middle of a crisis that is connecting us all.’

Neon Cyborg Cat Club is now available on PC and Mac. It is free to download for the next two weeks.