Magic: The Gathering’s latest set, Dominaria United, is a welcome return to a much-loved plane from the TCG’s history.
Emily Spindler 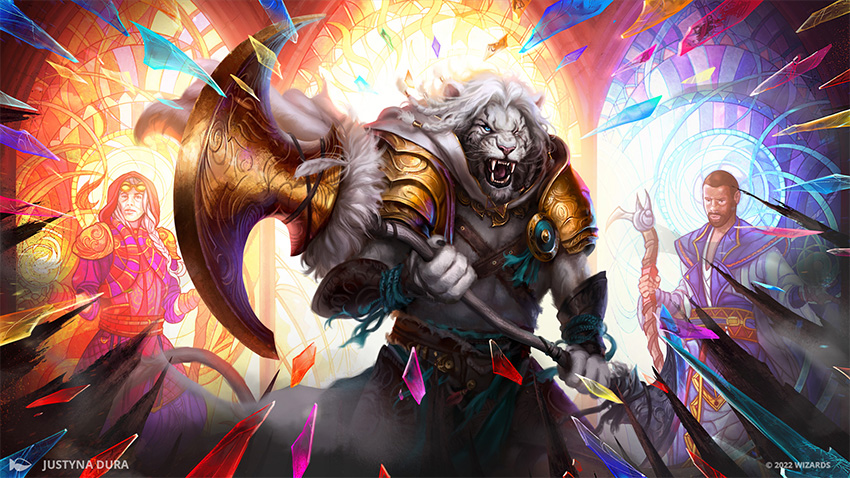 Magic: The Gathering is nearing its 100th set in 30 years, and there are novels worth of lore to read through to get caught up to speed on the multi-planar storyline. However, the latest set, Dominaria United, is a (personally) much-anticipated return to an iconic plane in the Magic universe, with plenty of interesting new cards to boot.

I’ve been playing Magic on and off for quite a few years now, but Dominaria holds a particularly special place in my heart. There are angels, elves, and dragons, all traditional trappings of any epic fantasy world. So, when it was announced that this set was on the release schedule, it was met with much anticipation. Add in the returning H.R. Geiger-esque biomechanical villains in the form of the Phyrexians, and Dominaria United sets the stage for an exciting new jaunt into this world.

At a recent Magic event, I got to test out the new cards and see Dominaria United for myself. For longtime players, it’s got everything you would expect from a typical set and new cards that seem set to become staples in one of the many game types. One of the highlights is the Jumpstart booster packs, which will be released with every new set going forward.

The Jumpstart format itself involves opening two of the Jumpstart booster packs, which each have a set of 20 cards of a particular colour, sorted into ‘themes’ (such as ‘Arcane Mischief’ and ‘Ready to Attack’). Shuffle two packs together for a quick, two-colour deck that’s ready to play. The format brings the strategy and combos common in constructed play, like Pioneer and Commander, with the speed of Booster Draft.

After a few games, it became pretty clear how well Jumpstart works at introducing new synergy and play types both to new players looking to learn, as well as seasoned veterans wanting to change things up. As a staunch red player, leaning into aggressive play and strong creatures, trying a blue and white combination and having to lean into different tactics was certainly refreshing.

Beyond learning new tactics (such as not being so quick to expend all mana for the sake of a well-timed instant spell in my opponent’s turn), Dominaria United also introduces a number of new mechanics to Magic, as well as seeing others return from previous sets.

Enlist is one of these new mechanics, allowing players to buff the attacking creature’s power by tapping another. For players building up to a large board of smaller creatures, adding one or two power could be just the thing to finish off an opponent. Another new addition is Read Ahead for some Saga cards, which lets you select which chapter the card enters the battlefield on to get the desired effect.

Some returning mechanics are Kicker, paying more mana to play a card for an extra effect, and Domain, which gives different abilities and buffs based on the number of basic land types on the field.

Some of the new abilities, such as enlist, hark back to older mechanics from previous sets, but nonetheless add something new to gameplay and keep things fresh. While previously, added mechanics have often come with extended explanations thanks to old rules interactions, Dominaria United’s mechanics are simple to grasp and straightforward, which is a welcome change.

Is it worth it?

Each set brings with it a big shakeup in the current meta and card pool, and Dominaria United is no different. Blue players can look forward to their first proper board wipe card in the form of The Phasing of Zhalfir saga card, and red players can buff their goblin tribal decks with Rundvelt Hordemaster. Even common cards in the set sit comfortably in tried and tested combos and decks.

While every colour has some fantastic new cards in this set, black decks are certainly getting some of the best additions across all of the formats. Players are clearly catching on to his – a sizeable portion of the most played cards in formats like Standard and Commander are black, according to MTG Goldfish statistics. There are a number of standout black cards like the reprinted Liliana of the Veil, as well as Sheoldred, the Apocalypse (which also comes in a full Phyrexian language alternate version), which are already fetching high prices in the secondhand card market thanks both to their rarity and abilities.

Beyond the abilities of the cards, the storyline in the set holds up well too – as part of a storyline spanning across the next few sets, Dominaria United ups the ante in the intense tale of Phyrexian invasion. While this story thread has been bubbling away as early as the Kaldheim set, this is definitely the catastrophe before the climax of this tale.

As with any Magic: The Gathering set, the value of the cards released hinges on each player’s favoured colour, playstyle and other preferences – but be prepared for the flood of powerful new infinite combos incoming both in Magic Arena and in tabletop matches. If you’re looking to get into (or back into) the TCG, Dominaria United is the perfect place to jump in.

GamesHub was invited to a Magic: The Gathering Dominaria United preview event and provided cards for the purposes of this preview.