From couch co-ops to interactive narrative, these games showcase the incredible diversity of culturally-informed, Indigenous-made games from around the world.
Jini Maxwell 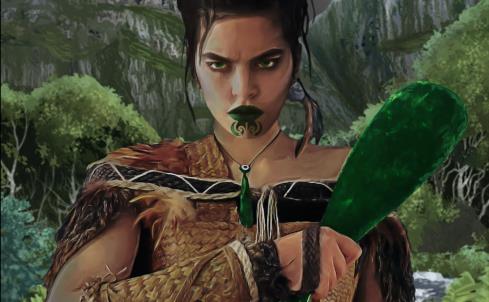 The hundreds of Indigenous Nations that exist on this continent comprise the oldest living cultures in the world. They were the world’s first creative technologists and innovators, and for tens of thousands of years, Aboriginal peoples have been sharing stories and culture through play. And that hasn’t changed: Indigenous artists, knowledge holders and creative technologists are still using games as a way to transfer knowledge, both in this country and around the world.

Whether to preserve and teach language, mythology, or something else, Indigenous games are a groundbreaking way that Indigenous peoples continue to express their cultures. Here are some remarkable, Indigenous-made games from around the world.

Dragonbear Studio’s first game is still in development, but I had to lead with it nonetheless. A friendly, chill co-operative game about running a magical tavern, Innchanted is set in a fantasy world based in Australian Indigenous mythology, rather than European mythology. From the soundtrack to the art style, Dragonbear Studio has employed, trained, and collaborated with Indigenous people from across the country on the title, under the guidance of Yarrer Gunditj game designer Phoebe Watson.

In the instances where creative director Paulina Samy couldn’t find Indigenous artists in the industry, she found ways to bring them in from other areas: Letoya Muraru joined the studio as a 2d artist and received training in 3D assist development, and RMIT animation student Patricia McKean joined the studio as a junior concept artist.

Innchanted represented Australia in the Ukie awards at Gamescom 2020, and it’s scheduled for release next year through Asmodee Digital.

If you’re looking for an excellent piece of Māori interactive fiction (and who wouldn’t be?) look no further than Metia Interactive’s flagship title, Guardian Maia. The choice-based narrative is a hybrid historical/science fiction story that draws on Māori mythology. The first episode, which is currently free to play, begins with Maia, one of the Guardians of a traditional Māori settlement of the settlement. However, as drastic events unfold, it is Maia who is unafraid to make the hardest decisions of all to protect her people.

As she makes choices, the Gods will judge her behaviours, weigh her decisions, and her ‘mana’ described as ‘Maia’s personal and spiritual power, her will, her integrity, her inner strength,’ is at stake with every move.

The first episode of Guardian Maia is available on Android and iOS. The second episode is due out soon.

Originally launching on PC in May last year, Umurangi Generation comes from Naphtali Faulkner, an Australian-based Ngāi Te Rangi designer, and is set in a slightly futuristic version of Tauranga Aotearoa. It’s now out on Nintendo Switch.

From a first-person perspective and equipped with an SLR camera, you take photos against a backdrop of rising neo-fascism. Faulkner told GamesHub his intention with Umurangi Generation ‘was to explore those very specific ideas of what makes a fascist population’.

The game recently won the Freeplay Award, as well as the Grand Prize at the New Zealand Games Festival. Shockingly it is Faulkner’s first game, though in his acceptance speech at the Freeplay awards, he teased a follow-up, which he described as a political thriller.

Umurangi Generation is available on PC, Mac, and Nintendo Switch.

In this highly stylised 2D game, you play as a thunderbird who must fly from the Tar Sands to the Great Lakes restoring the creatures of Turtle Island, and destroying the industralising forces that threaten to swallow the lands and waters whole. With simple touch-based controls, it’s accessible to people of all ages who want to experience Lapensée’s stunning art and animation.

The audio for Thunderbird Strike was also developed by Casey Koyczan, a Tlicho Dene interdisciplinary artist from Yellowknife, who went on to develop the immersive, mythological VR experience Wenazìi K’egoke ; See Visions with Travis Mercredi.

Thunderbird Strike is available on Mac, PAC, Google Play and the App Store.

Created as a part of the first Indigicade, a workshop that teaches Indigenous women how to make games, Wanisinowin was designed by Meagan Byrne, a Métis game designer who founded Achimostawinan Games in Ontario, Wanisinowin positions the player as a young girl living in the spirit world who learns that she is, in fact, human.

She takes up a chance to go to the human world for the first time, guided by her Aunt, but the road there is not an easy one, and players must navigate a dark world without losing their light or their way.

Wanisinowin is available on PC.

Finally we have one of the most famous example of an Indigenous-led piece of game design. Kisima Inŋitchuŋa is a puzzle platformer that was designed in close collaboration between Canadian game developers and an Iñupiat community Native to Alaska. In the game you play a little girl, Nuna, and her Fox companion, as they search for the source of the eternal blizzard that threatens to wipe out their home. Featuring creative labour and consultation with almost 40 Alaska Native elders, storytellers and community members, and narrated entirely in Iñupiaq language, the game’s narrative is drawn from a traditional story that has been shared across the generations.

Perfect for child and adult players alike, you can explore this stunning world, which is populated by figures from Iñupiaq myth and legend, either in single-player mode as Nuna or Fox, or to play co-operatively with a friend. An extra chapter, called Never Alone: Foxtales, was released the following year.