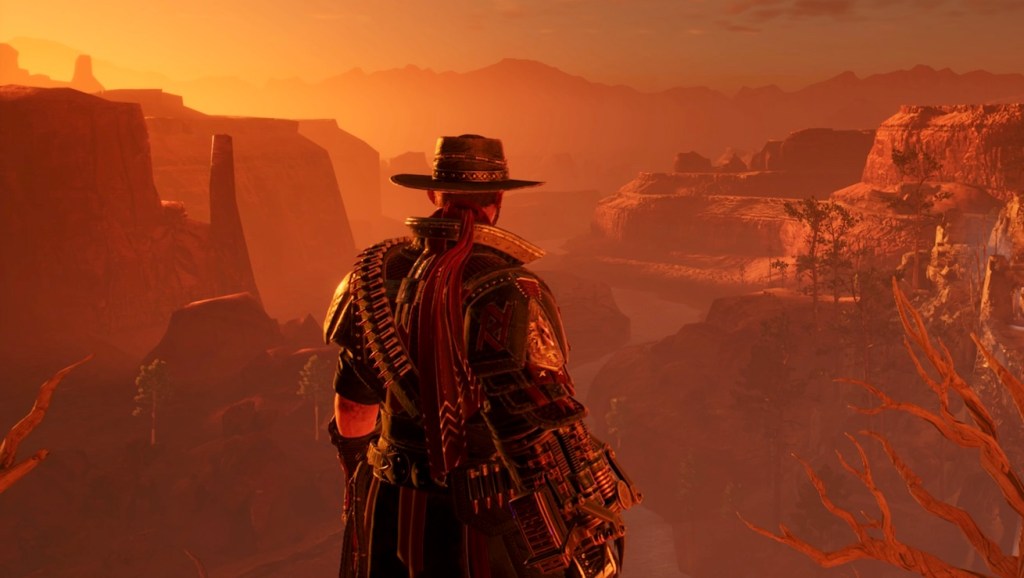 The mythic Wild West has long fascinated fans of pop literature, with the cruxes of these tales – cowboys, vast desert landscapes, gunfights – being twisted into new and more daring forms over the decades. The Wild West has served as a backdrop for emboldening anti-hero tales, political commentaries, and analysis of Americana. It’s also birthed an array of literary subgenres, including Gothic Western or ‘Weird West’ hybrid fiction – where the West holds sinister tidings, and evil monsters wait in the wings.

The supernatural-infused Gothic Western genre has phased in and out of vogue, with its greatest successes littered throughout the 1980s, 1990s, and early 2000s – in The Dark Tower, Vampire Hunter D, Near Dark, From Dusk Till Dawn, and other adjacent tales. Video games played a major part in the popularity of this genre in the same period, with titles like Darkwatch introducing mainstream audiences to classic gunslinging and vampire slaying.

Evil West, the latest game from developer Flying Wild Hog, owes a lot to Darkwatch – and to the wonderful world of Gothic Westerns. It’s a revival of this niche subgenre that feels needed after years of mediocre offerings. With solid combat and snappy dialogue, it’s a power fantasy adventure with a tasty, familiar bite.

In Evil West, you play Jesse Rentier, a vampire hunter from a long line of vampire hunters. Like his father before him, he works for the Rentier Institute, a decades-old secret organisation working to rid the world of supernatural threats, against the backdrop of American industrialisation.

As the last bastion of hope in a changing world, Rentier represents ‘the old guard’ – a classic cowboy hero of the past.

With an electrified gauntlet by his side, shotguns for monster mashing, and a strong right hook, Rentier sets forth on a quest to redeem his family’s institute and battle an array of strange beasts as the night unfolds, and the action of Evil West gets weirder.

Those who enjoy Gothic Western fiction will note a strong familiarity with Rentier’s story. In fact, it’s trope-filled and fairly standard, representative of a large portion of fiction in the subgenre. In Rentier, we have the classic lone gunslinger buoyed by thoughts of bloody revenge – think Jericho Cross, Roland Deschain, Blade, or Abraham Van Helsing. In the vampire hordes, we have a traditional, faceless enemy –monsters that stalk the shadows, with a taste for human blood.

Read: Gungrave G.O.R.E. review – A bloody blast from the past

There’s nothing too surprising about the game in that regard. In arena battles and journeys through moonlit nights, Evil West pays homage to a storied genre, with a clear reverence for the past. It’s not just in the gunslinger trope that the game cribs its tale. Main antagonist Felicity, for example, is a reimagining of the common Not Growing Up Sucks trope – she’s a young girl cursed with vampirism, but blessed with a deadly and terrifying intellect. Think Claudia, from Interview With The Vampire. Eleanor in Let the Right One In.

But despite the narrative being threaded from loosely-held-together tropes, Evil West still manages to deliver a satisfying, bloody romp with enough spark and tongue-in-cheek charm for it to be a worthy entry in the Gothic Western canon.

The game’s combat is, in large part, a major saviour. While titles like Darkwatch introduce similar gothic worlds and common tropes, Evil West adapts its tale with gorgeous segments of exploration and meaty, electricity-powered melee moves. Gunslinging is a large part of the action, but the star of the show is the Rentier institute’s experimental lightning-powered gauntlet. This allows for ground-pound stomping attacks to clear enemy hordes, electric punches, and teleportation across short distances.

It allows for a menagerie of actions as vampires and their companions get more deadly – some evolve to have claws, others are larger, some rock shields. Time your shots right, and you can blast evil bugs out of the sky. Dodge and roll, and you can avoid the most powerful attacks from bloody cleavers and spikes. These controlled movements are extremely responsive, and make for a dynamic combat system that evolves alongside Rentier.

But while this combat is a standout joy and helps to mark Evil West out as unique in the genre, it’s hard to say it ever escapes the shadows of its predecessors.

It treads similar pathways to Darkwatch, in the journey of Rentier and the goals of his shadowy organisation. It pulls villains from Interview with the Vampire, and schlocky vampire-werewolf horror from Van Helsing and Underworld. It’s even got a touch of The League of Extraordinary Gentlemen about it, in its locales and set pieces.

The Gothic Western genre has always been about power fantasy – a deadly force facing off against the forces of evil, all guns blazing. In that regard, Evil West is a perfect genre game, adapting tropes and commonalities from an array of beloved franchises.

Its homage is very well-trodden, and features recognisable characters, weapons, organisations, and plots from across the genre – but it does just enough to tread its own path, one melee blow at a time. There’s no reinvention of the wheel here, but its reinvigoration of the Gothic Western genre is exciting with each twist. We can only hope Evil West will lead to a full-scale revival of one of literature’s most popular and enduring fiction genres.