What Elden Ring is like for a first time Souls player 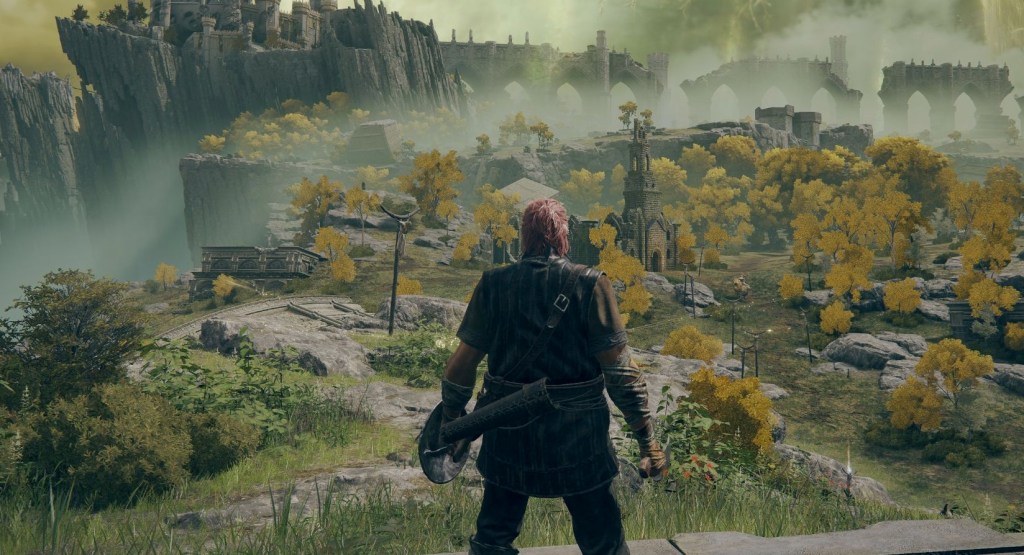 The world of Elden Ring is vast and hostile. (Screenshot: GamesHub)

I am a lone wanderer in a hostile land, walking a scorched earth filled with mutant beasts and creatures that tower overhead. I am a warrior with little hope; a portly shield, and a toothpick-sized dagger are my only companions. There are potions in my pouch, but they do little in the face of hard blows that burst me into dust over and over again. This is how it is in Elden Ring, in the Lands Between where life and death are categorically the same. To live in this world is to die in it – and each time stings more than the last.

For a first time Souls game player, it’s a world that feels overwhelming, and frequently hostile.

Starting out in Elden Ring, the game only gives players a few pointers. Heck, the entire tutorial is hidden in a giant hole you can easily walk past if you’re not paying attention. While this tutorial only gives you the basics, it does provide some much-needed context to a high fantasy adventure that often feels confusing if you’re not familiar with FromSoftware’s signature style of gameplay.

Once you’re past the challenges in the hole, you’re free to walk through ancient doors, and into a wide open world filled with terror. My opening moments with Elden Ring were promising. The tutorial is filled with guards that are easy to kill, and they gave me a false sense of confidence. I can do this, I thought. It’s not nearly as hard as people make it out to be.

I was wrong. Oh, so very wrong.

There’s no real instructions in the first moments of the game – not even explainers for basic items, or how to find better weapons – but from a high peak, looking out over the Lands Between, it’s easy to imagine a surmountable game, even as a cautious, first-time Souls player. The trees sweep the landscape in a slow rhythm, and odd figures seem sparse enough that wandering should be relaxing – but the peace here is largely an illusion.

The further you wander, the more likely you are to run into a great beast who can’t be felled without sturdy equipment, a nervous finger on the dodge button, and a full head of steam. No matter which direction you go in the game’s wide open world, there’s always something nasty waiting around the corner. There’s always something waiting to kill you.

In the quiet ruins of a building, I attempted to attack a funny mushroom. It had little health, and I could dispatch it easily – but when it died, it unleashed a noxious gas cloud that hid the approach of Flying Dragon Agheel, one of the major bosses waiting in the wings. Agheel moved swiftly, and I only just avoided his flame breath – but then the noxious gas from the mushroom killed me anyway.

This is how my journey with Elden Ring has gone, with no exceptions. I find something cool-looking or intriguing – a spot on the map that feels quiet, or a locale filled with treasure – and then a beast drops from a ceiling, smashes through a wall, jumps out at me, or attacks me from behind.

I try dodging and rolling. I try looting new armour and weapons. None of it matters.

I tried so many times to defeat Agheel that eventually, I gave up and walked away – and in doing so, discovered an odd little secret I wasn’t aware of: that in Elden Ring, it’s perfectly okay to walk away. In fact, most bosses are optional. The ones wandering in the overworld certainly are. Some guard treasures, sure, but if they’re not in enclosed rooms or spaces, you can skip them entirely.

Run away, and you can still advance in the game’s world.

The reality is FromSoftware’s games are extremely difficult, and they’re not for everyone. I learned early on in my experience that the style of combat, and the need to maintain constant vigilance, mean the game wasn’t for me. But even despite my countless deaths, running into octopuses I thought couldn’t fly (but really could), and getting lost too many times to count, I’m still enthralled by the world of Elden Ring.

It’s a game with far more freedom than I ever expected.

Without a linear story, or a set of tangible quests to follow, you can really go anywhere. Set off in one direction, and you’ll encounter a different beast than you’ll find in any other corner of the map. Go right, and you’ll find hordes of man bats roaming the ruins. Go left, and you’ll find a beach filled with flying octopuses. You can even stumble into ghoulish camps filled with long-dead soldiers, and discover treasures hiding beneath the earth.

You might die, fair warning, but that’s part of the Elden Ring DNA. You die, and you die, and then you try again. If you run into an enemy you can’t defeat, walk in the opposite direction. Roll past them, and keep rolling. This is how most of my time with the game has gone so far – and I don’t see it changing any time soon.

While I’ve had to admit to myself that non-optional bosses likely won’t be beaten – and that as a result, I won’t finish the game – I’ve still found a lot to love about Elden Ring. The Lands Between are incredibly compelling, and with every death comes the vague promise that maybe – just maybe – I’ll find some miracle along my path that’ll buoy me to victory. It’s a dim hope, but one that’s kept me hooked on my path.

The urge to return to the game isn’t one I expected. Defeat comes so frequently that it’s easy to feel bummed out, and frustrated both by a lack of skill on my part, and a lack of difficulty adjustment on FromSoftware’s part.

Still, the denizens of Elden Ring are fascinating, as are its eldritch horrors. The world is filled with countless treasures, and on every clifftop and sandy beach, there’s a reason to keep exploring.

As much as the game is grinding me down, and reminding me why I prefer to play on easy, it’s also oddly encouraging. There’s so many options for exploration that it doesn’t really matter if you can’t defeat one particular boss or other. If one path is closed, there’s dozens more you can take in its place.

Even if I don’t survive in Elden Ring long, I want to see exactly where every path leads.

I’m not going to pretend to be some great conquerer, cutting down the beasts in my path with ease, but if I can dispatch one wayward enemy, or discover some fancy new footwear along the way, that’s enough for me. You don’t have to be a perfect player to find something to love about Elden Ring.

An Xbox Series X review code was provided to GamesHub for the purposes of this review.