Filled with intricate systems that never quite come together in enough interesting ways, Weird West is more interested in itself than its players.
Nicholas Kennedy 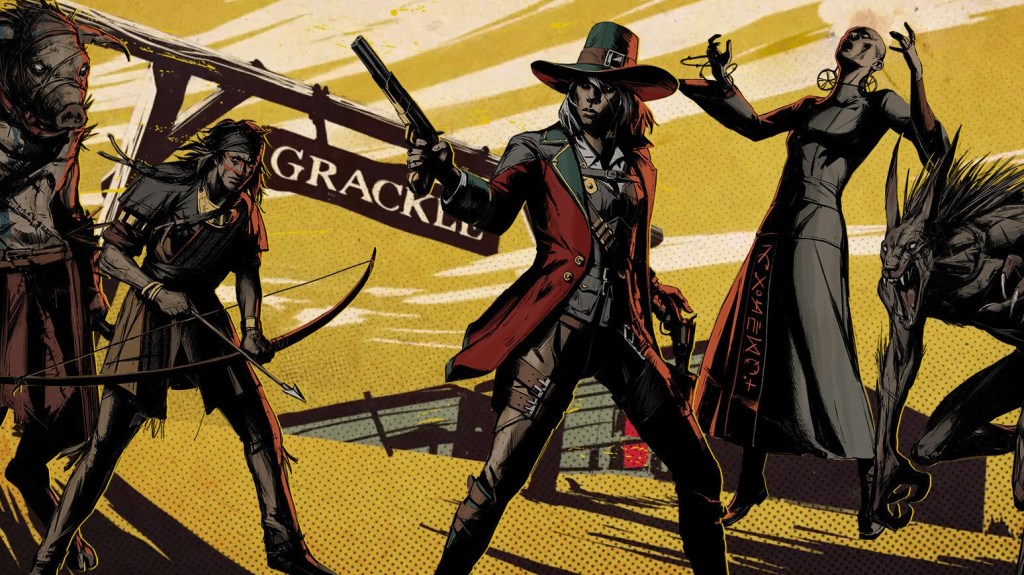 Weird West has a lot of faith in systems: Day and night systems, reputation systems, barrels that contain liquid systems. Birthed from some of the minds behind the Dishonored series, Weird West tries to marry a kind of mystical, bloody and whacked out vision of the American frontier with precise mechanical and systems design that you can almost set your watch to. The result is one of the most ‘I really want to love this’ games I’ve played in a while; sometimes hitting, but missing just enough to the point where Weird West seems more interested in itself than players.

Weird West plays out in an anthology structure. Your actual character – some nondescript spirit presence known as ‘the Passenger’ – inhabits characters with wildly varying backgrounds strewn across the land. A ‘retired’ gunslinger, a cursed and tragic pigman, a religious zealot – all of which are basically avenues used by Weird West to tour you about the unique (and sometimes not so unique) environments of its world, allowing you to stick your nose (or snout) into each and every dank, eldritch cranny. You’ll sneak through brothels and skulk down blood drenched mineshafts, piecing together the broader narrative of Weird West as it spills across the five different characters you control across its playtime.

But it’s clear after the opening few hours of Weird West that it isn’t really interested in witchcraft, curses, werewolves or vampires beyond their usefulness as window-dressing. It isn’t interested in satisfying, unique narratives squirrelled away in corners of the world, special weapons, or companion characters. Weird West’s heart lies in the fact that when you kick over a barrel full of water, you’ll still be able to drink whatever liquid remains inside (for a lesser bump to your health of course). Weird West could watch fire propagate naturally across flammable surfaces ‘til the cows come home; better yet if the fire was unintentionally started by players while they clicked about ineffectually; locked in the game’s wonky combat encounters.

Weird West is constantly trying to wow with minor, largely inconsequential systems that desperately collide in order to create some kind of interesting outcome, which often results in frustration, and the realisation that the game had to be severely flattened – the game is full of blank, repeating template maps – so all these systems could run around having fun with each other while players look on.

There’s an inherent drudgery to searching the same template ghost town come bandit camp come ghost town for one side quest MacGuffin or another. One mission tasked me with finding an item important to a local gravedigger that had somehow found itself into the coffin of a customer, but in reality, the task was to watch the same digging animation ten or fifteen times as I desecrated the graves of the town inhabitants before they were replaced with tumbleweeds and old bloodstains on the saloon floor. Halfway through digging, my shovel broke for some reason, and after returning to town to replace it, it broke again. The gravedigger never did get their whosit-whatsit, but to be fair, I don’t think they were really invested in it to begin with.

Another moment found me seemingly soft-locked on my primary quest line after burning through my limited number of keys that unlock special underground areas in the world. I stood before one of these gates, the quest marker hovering above the ancient stone port-hole expectantly, without any means of entering.

Minutes earlier – taking cues from the game – I had gone off the beaten path, exploring locales that were marked on the map, and finding an optional underground area that required one of these keys to enter. The optional area was filled with mostly useless trinkets and loot; but at least I broke even on ammo.

The issues here are ultimately ones of priority and execution; Weird West may well have soared had its systems connected more often in more interesting ways, but the work put into every random little mechanical flourish the game pulls doesn’t equate to a better overall experience. Dynamically populating graveyards doesn’t change the fact that every combat encounter feels the same.

It’s a shame that the weirdest thing about Weird West is how boring it can often be.

The PC version of Weird West was provided and played for the purposes of this review.