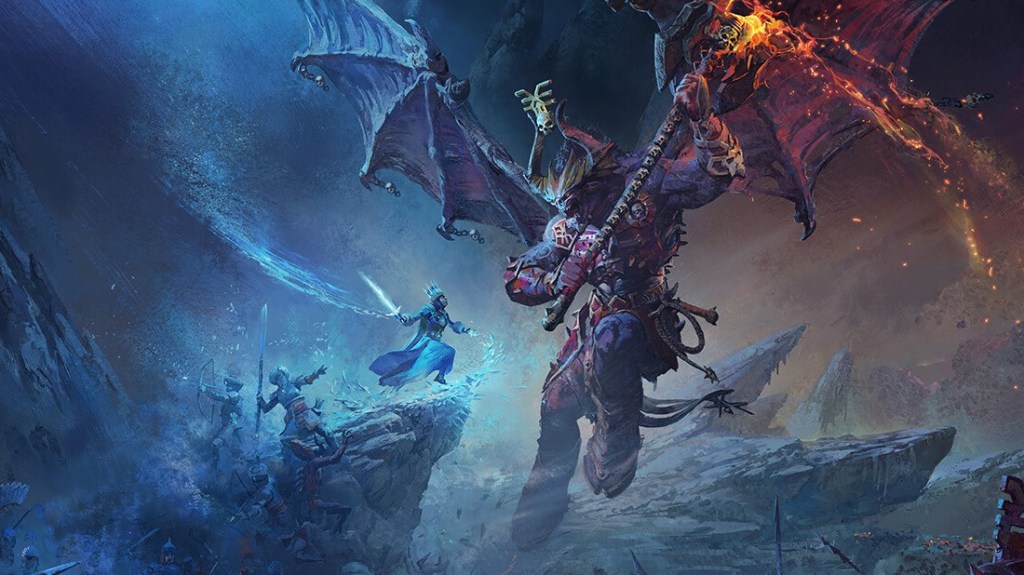 Total War: Warhammer 3 is a grand strategy game in both scale and spectacle, as you direct hordes of daemons in a rampage through the realms of mortals and gods, or guide mortals that seek to cut their way to the heart of Chaos. To achieve victory, you must micro-manage troops across the battlefield to outmanoeuvre your foes, plan out the infrastructure of your provinces, and guide your faction leaders through perilous expeditions into the realm of the Ruinous Powers.

Like Warhammer 2 before it, Warhammer 3 is another dose of story-based content that builds on the design of the Total War strategy games and the partnership with the Games Workshop property. It features a new campaign, seven new factions at launch (eight if you include the Ogre Kingdoms DLC) with unique units, spells, mechanics, and gameplay changes to land battles and sieges.

The new factions all feel like great additions to the Total War: Warhammer roster. The Chaos factions are a real blast, each with their own speciality in combat, and unique, horrifying aesthetics that match their daemonic patrons.

The mortal factions of Cathay and Kislev are similarly engaging, with Cathay focusing on balanced army compositions that operate synergistically to dismantle opposition, while Kislev dominates the battlefield with hybrid infantry and devastating bear cavalry. But beyond the ever-increasing amounts of content, Total War: Warhammer 3 feels approachable in a way that the previous two entries did not.

The Total War games have historically suffered from a high barrier to entry, with mechanics that aren’t necessarily complex when understood, but give off the impression of being so. They can be intimidating to get into, and the previous two Warhammer entries were no exception. Advisors are usually present within a pseudo-tutorial system, but if you don’t have prior understanding of the Total War gameplay system, making choices about which buildings to prioritise or how to effectively engage with diplomacy is difficult.

A more robust tutorial system is front and centre in Total War: Warhammer 3.

Upon starting the game for the first time, you’re given the option to play through the Prologue, a mini-campaign following the journey of a prince of Kislev as he attempts to find and free Ursun, the Great Bear. This prologue acts as a self-contained tutorial campaign, is clear and informative, and offers a curated Total War experience that will guide you through the core mechanics of the game.

The brevity of the prologue allows you to experiment with the campaign map mechanics in a way that won’t cripple your progress long-term, a very real possibility when making mistakes in a grand campaign.

Other than the new factions, the major innovation in Warhammer 3 is the addition of Domination mode battles. These pit armies against one another in a struggle to capture and control strategic regions of a battle map. In the campaign, these are expeditions to invade the realms of the Chaos gods, claiming capture points and accruing Supplies – resources you can spend to upgrade units, build defences on the battle map or summon reinforcements.

As you progress through the map and claim the capture points, waves of enemies are triggered, and must be dealt with before you can move on. These are fun, tactically unique battles, and act like moving sieges. On the game’s normal difficulty, they feel like a good amount of challenge (and bafflingly, the option is present to auto-resolve these fights, despite being pivotal narrative battles).

The Domination game mode really shines in multiplayer, though. In either 1v1 or 2v2 modes, players will select a small roster of troops to start the battle, and then a much larger list of reinforcements that can be drawn from throughout. Each map has three capture points that unlock a few minutes after combat begins, and as you fight, both sides accrue Supplies that can be spent to summon units from the reinforcement list, allowing you to adapt on the fly to the decisions your opponent makes. Minor balance issues aside, this game mode is a refreshing change of pace from the standard battles, leading to highly reactive back-and-forth gameplay.

Many of the faults that were present in Total War: Warhammer 1 and 2 remain in this latest entry – the auto-resolve system is wildly inaccurate, magic remains powerful to the point of game-breaking at times, diplomacy is often pointless, and load-times can be exhaustingly long, particularly when passing turns on the campaign map.

But these issues aren’t enough to bog down what continues to be a great series in the Total War franchise. With an entertaining selection of factions, an interesting new game mode, and great onboarding, Total War: Warhammer 3 is a grand strategy well worth the time.

A PC copy of Total War: Warhammer 3 was provided and played for the purposes of this review.