The Callisto Protocol review – We’ve seen this gore before

A gory horror game synthesised from many parts, The Callisto Protocol tries to invoke its influences while striving for something new.
Nicholas Kennedy 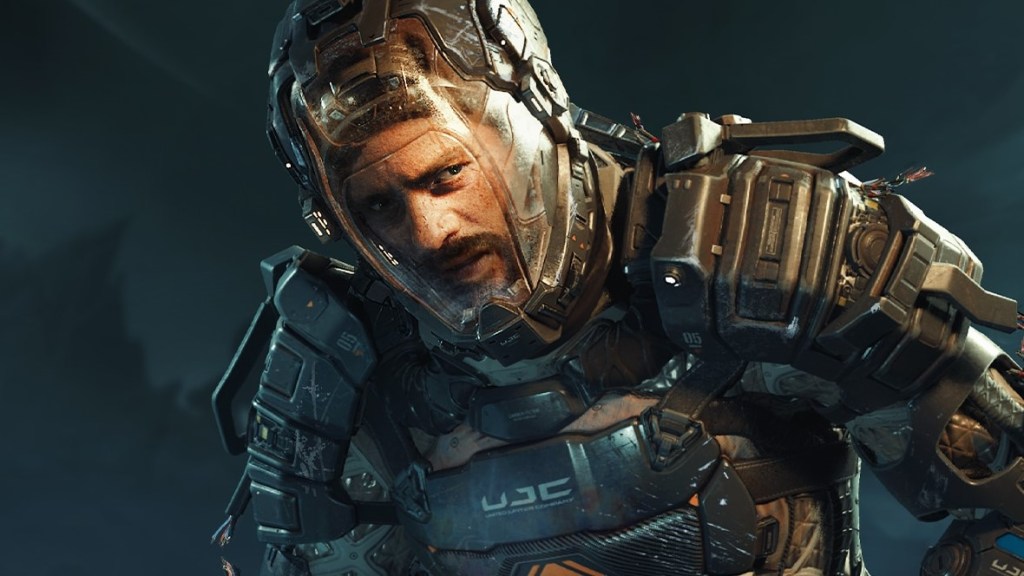 The Callisto Protocol has an unenviable task. It’s asking you to perform time travel. ‘Cast your imagination back,’ it beckons, ‘to 2008’. ‘Tap into the experience and revelation of Dead Space once more, but also accept me as the launching point for a new series which borrows liberally (some would say shamelessly) from that most beloved horror franchise.’ The Callisto Protocol seeks to do this, all while resurrecting a gameplay format that we just don’t really see in games anymore, the third-person corridor horror shooter.

The lineage that The Callisto Protocol shares with Dead Space initially seems like a boon; a new horror franchise from the minds behind the USG Ishimura, Isaac Clarke, and the necromorphs. Dead Space creator Glen Schofield and company, in the form of Striking Distance Studios, return with another grimy, exhausting dirge through the bowels of some metallic sci-fi hell.

The issue for The Callisto Protocol is that these origins saddle it with a tough balancing act, one suspended between new ideas and familiar rhythms. It runs the risk of reaching neither the heights of the Dead Space legacy, nor pushing past the gameplay of a series which last saw its conclusion almost a decade ago. Callisto’s response to this task leaves it feeling like a game out of time, with a ‘right place at the wrong time’ kind of inexplicability, especially with a ground-up remake of the game that started it all on the horizon.

The Callisto Protocol has a lot of the right moves. The issue is, you’ve probably seen them all before.

It starts with the setting. Prisons serve as perfect canvasses for horror, considering their already dubious moral perspectives and dynamics. The Callisto Protocol reminds you of the moral blackhole penitentiaries from games like The Suffering, Manhunt, and Outlast. Black Iron Prison is seemingly the only major landmark on the titular Callisto moon, lorded over by one Warden Cole, who welcomes each new batch of inmates with a pre-recorded message lambasting them for the poor choices of their purposeless lives, but promises, forebodingly, that ‘we will find that purpose’.

It says a lot about the emptiness of Black Iron’s view of human value that your protagonist, Jacob Lee (Josh Duhamel), shouldn’t even be here in the first place. Usually a courier between Callisto and another of Jupiter’s moons Europa, Lee crash lands on Callisto, a process which sees his copilot donate half his face to the atmosphere. As far as the warden is concerned, it also embroils Lee in the ongoing plans of the Outer Way, a state-designated terrorist cell led by Dani Nakumura (Karen Fukuhara), which seeks to expose the machinations of what they see as an authoritarian government.

Barely a night is spent in Lee’s cell before the body parts start to fly. Awakened to an already dilapidated and aflame cell-block, Lee begins his journey to escape through a Black Iron Prison which has seemingly been overrun with infected and rapidly mutating inmates, as the prison collapses and reveals its true nature.

The innards of Black Iron Prison snake unpredictably with corridors, ventilation systems, steam and sewerage in ways that – compared to key moments of environmental storytelling –  often don’t expand or tell any kind of meaningful story about the penitentiary itself, or the people that lived and worked there.

There’s lots of crawling through vents to get from one cramped area to the next, but the implication that Callisto is trying to impress you with; that you’re trapped in the service corridors and byways of one of the worst places in the galaxy, is never really painted with any brush other than blood and abject, uncreative cruelty. Even though later areas deep underneath the foundations of the prison itself expand the ‘lore’ of the story, it’s achieved in still largely unremarkable ways. Characters walk and talk about what happened to the people here, and then proceed to shoot and beat to death the monsters they became.

The Callisto Protocol expects you to fill in a lot of the blanks of its world by staffing it with stereotypes and tropes – the scheming, maniacal warden; the guy that likes being infected, actually; the endlessly helpful partner character that always decides to monitor things from whatever control room you leave them in –  which is a disappointment in its own right, but also when compared against the vibrant, unsettling marriage of sci-fi, cosmic and body horror seen in the original Dead Space trilogy.

Callisto alludes to themes of a for-profit prison system, or systematic protection of violent police, but never really does anything with either, relegating them to found audio logs and short, optional character descriptions. Thinking back to a high-water mark of space-station exploration, 2014’s Alien: Isolation, the difference between the already declining Sevastopol space station – a storytelling space rich with corporate malfeasance, pathetic capitalistic desperation and the lives of those caught in the crunch – and a setting like Black Iron Prison, the difference is one of detail. This translates across to the gameplay too; the actions available to you in The Callisto Protocol are reliable, if restrictive.

I’ll never forget the first time I saw The Last of Us’ Joel Miller go to work with a plank of wood. The cinematic, full body nature of Joel’s vicious attacks were not just an incredible addition to the game’s desperate combat systems, it was an expression of Joel as a person. The Callisto Protocol borrows liberally from this kind of committed, one-on-one melee combat for one half of its combat system. The camera locks in behind Lee, following his swings with a kind of insatiable bloodlust as he lets limbs fly and caves in the skulls of the infected. While even the most basic enemies pack a serious punch on the games standard difficulty setting, wailing away on enemies is more forgiving here than you might expect, and the game eventually introduces a combo finisher which allows a quick draw attack using guns Lee collects along the way.

You can also use a form of telekinesis; a special glove called the GRP, allowing you to grab enemies and whiff them into whatever spinning deathtrap is the centrepiece of your current combat arena. Folded into this is the game’s dodging mechanic, which allows for the player to always avoid damage provided they’re moving to either the left or the right once an enemy starts to attack, resulting in Lee dodging immediately in that direction; the only catch being that you can’t dodge in the same direction twice. It’s a very forgiving dodge system, and I found being crowded into a corner more cause for my demise than anything else.

Boss encounters suffer the most from this generosity; their singular, telegraphed swings only ever coming in groups of two or three, meaning whatever complexity there is to be found in the combat system is swapped out for the same tired dance of traded blows in the middle of a boss arena. After one encounter, I was struck by just how much room and extra resources were scattered around for me to make use of as I fought a boss; all entirely unnecessary.

Enemy variety here is also lacking; there’s only really six or so distinct enemy types across the game’s roughly 12-hour runtime, and one of those explodes immediately when you shoot it. I could tell you broadly about some of the areas I visited in my time on Callisto – the bit with the rotating botany stations, the bit in the snow, the bit where you use the game’s rudimentary stealth systems to sneak around blind enemies – but only one or two key combat encounters really stick out in my brain.

I sure did cave in the skulls of many shirtless, pustule-ridden and raving inmates, but these moments become a blur of the same attack animations over and over again. Callisto even has its own ‘CUT OFF THEIR LIMBS’ moment of instructional blood-writing on a wall, reminiscent of Dead Space once more, but here it instructs you to shoot the tentacled weak-spots on an infected’s chest before they have a chance to mutate into the same, slightly stronger enemy – a severely less creative addition to the combat than that iconic game mechanic. The prison also has a weirdly progressive approach to contraband, meaning whatever illegal loot you find lying about can be sold back at these 3D printing stalls, in exchange for upgrades on your weapons.

If The Callisto Protocol is the basis for some new franchise amongst the horrific, bloodied stars – a fair assumption given many of the game’s exposition-heavy late reveals – it’s playing it extremely safe. It’s hard not to wonder if this all started at the source. Dead Space was a shot in the arm to the horror genre at the time to be sure, but trying to emulate that experience so faithfully – regardless of how good-looking Callisto is – makes the whole thing feel redundant.

All these comparisons might sound as though it misses sight of The Callisto Protocol as a game in its own right. But the more time you spend in its world and systems, the clearer it becomes that the game doesn’t just court this atmosphere of comparison, it has built it as a scaffold on purpose. The Callisto Protocol sees itself as an incoming champion to the survival horror crown dropped by Dead Space in 2013, and it wants you to know it.

There’s a solid game at the heart of Black Iron Prison, but every opportunity the game gets to subvert expectations or do something new is instead a moment of deferral to one of Callisto’s many inspirations. It’s nice to see Callisto try to be a new brew, synthesised from many parts, but an entirely new vision would have stuck around in the bloodstream a little longer.

The Xbox version of The Callisto Protocol was provided and played on an Xbox Series X for the purposes of this review. GamesHub has affiliate partnerships. These do not influence editorial content. GamesHub may earn a small percentage of commission for products purchased via affiliate links.