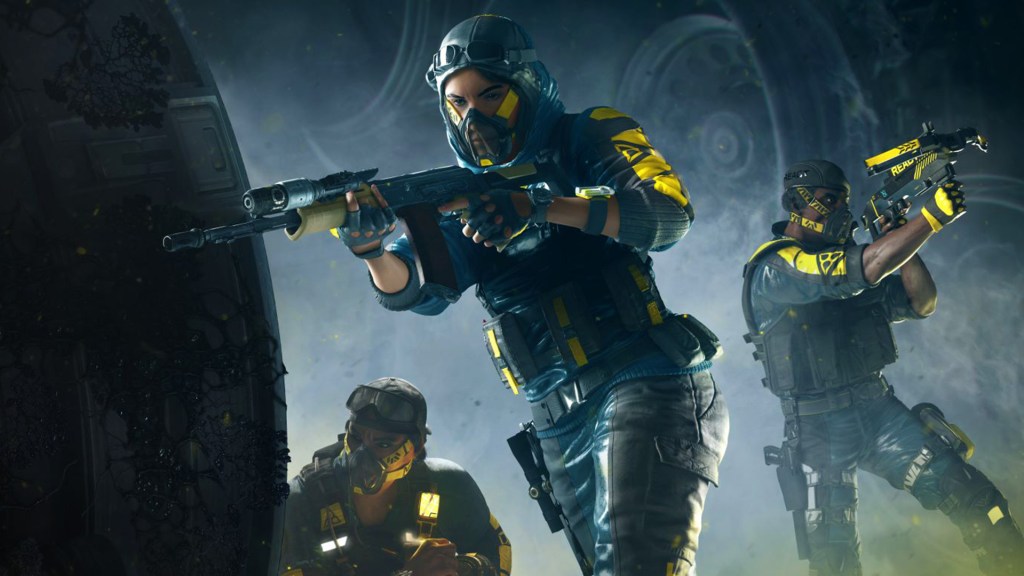 In Rainbow Six Extraction, the counter-terrorist operators of the competitive multiplayer game Rainbow Six Siege have a new enemy to contend with: sticky aliens from outer space. Mostly humanoid in form, they spread a black, gooey substance that impedes player movement. Their tougher variants are equipped with impenetrable armour and scary, stabby arms. They can teleport and morph into fellow operators, which is also a little bit terrifying.

But for all the jingoistic high stakes impressed on you by Extraction’s scenario, the game itself provides very little ongoing motivation for you to keep doing what the game asks you and your fellow squadmates to continually do.

Designed as a three-player cooperative game, Rainbow Six Extraction pits your squad against the alien forces in four distinct US locations, each containing three sub-areas. When heading into an incursion, Extraction randomly assigns an objective to complete for each sub-area.

Whether you succeed or fail the objective itself, your squad has two options – you can attempt to exit the mission and bank what experience points you’ve earned so far towards your character’s progression meter, or continue through to the next sub-region and attempt to complete the next objective.

Completing more missions and gaining experience improves your selected operators, giving them more loadout options and making them more resilient in the field. Doing so also allows you to stand a chance at taking on the same randomly-generated missions at higher difficulties for more experience.

There’s inherent tension that lies in the risk/reward proposition you might face if you or your squad have suffered some setbacks in the current zone. You might be low on health or equipment, or simply not have the right kinds of operator specialisations for the next objective, let alone whatever curveballs or enemies might await. But if you do manage to complete the next objective, you’ll walk away with a greater pool of experience points.

It’s a self-serving loop where eventually the only motivator is chasing the idea of being able to level up your operators and tackle increased challenges – it doesn’t take too long before you’ve seen all the maps, attempted most of the objectives, and the sheen of ‘new stuff’ fades.

Squad up, squad down.

Difficulty and high stakes is what makes using the tools of Rainbow Six so compelling. Leaning around a corner, lining up your aim and taking out an alien with a single, silent shot is inherently satisfying in the moment, and knowing that the same high degree of damage can also be done to you is what keeps you engaged.

With a scenario featuring overwhelming alien forces, Rainbow Six Extraction is absolutely a game where your ability to play stealthily and smartly is a strong contributing factor to your success, perhaps moreso than the 3 vs 3 matches found in Siege, given the power disparity here. Using techniques like shooting enemies through walls, barricading doors and windows to secure an area, and scouting with technology is all very useful and interesting, when your team knows how to use them.

Unfortunately, that means relying on other people. If you don’t have a regular squad of players to team up with, it means relying on random matchmaking which, in my experience, has mostly been a disaster as folks sprint heavy-footed straight into peril, try to quickly gung-ho the objectives and move on, only to take a huge tumble shortly thereafter.

But even during my time with a squad of well-communicating, competent friends, it only took one fumble for everything to go wrong and progress to be lost. When things go wrong in Extraction, it almost always means certain death. Emergent narratives can definitely spring from an Extraction session, but when the possibilities for variations are so few – with the same handful of contained spaces and a small variety of objectives, even those watercooler moments tend to repeat.

You can play solo, however, and the difficult scales in kind. The atmosphere is more effective as a one-versus-many situation, but later in the game, it’s clear that this is not the way the game is meant to be played. Some of the game’s boss fights – yes, boss fights – are nearly impossible when tackled alone.

It means that Extraction is at its most enjoyable with a squad of very focussed, and high-performing players who are all on the same page. Being able to competently complete one objective after the other calmly, quietly, and in synchronous harmony is satisfying, but those opportunities were unfortunately rare for me.

At higher levels, even the act of progression becomes a bit of a chore. While operator experience is tied to the completion of objectives during incursions, overall progression is dictated by a challenge system. Each map comes with its own set of Studies where you’re handed three different actions to try and perform during a mission. On completion of three of them, you move onto the next.

In the beginning, this is as simple as killing common enemies or learning how to use the ping system. Later on, the Studies ask very specific things of you, like taking out a particular enemy in a certain way, which can be frustrating since you can go through a whole incursion without ever seeing said enemy.

The narrative dressing is too slight to be a significant motivator. The stakes are too high to use it as a catalyst to simply just spend time with your friends. And taking on the same kinds of missions again and again quickly grows stale.

There’s nothing to handle in-between incursions, no larger strategy or management layer. You simply gather your experience, perhaps unlock a few new tools and cosmetics, and jump right back in. Extraction was seemingly built upon the foundation of a limited time mode in Siege, and it still feels that way. The unique scenario is interesting, but what’s missing is the extra variety and metagame to support or reward consistent engagement.

The act of embodying a Rainbow Six operator feels great, but once you leave the world of Extraction, it’s very hard to muster up the enthusiasm to go back in. Sure, there’s an endless cycle of parasitic aliens invading, but I know that no matter how much time I put in, the reward for doing a good job is just going to be more work to do.

A PlayStation 5 copy of Rainbow Six Extraction was provided and played for the purposes of this review. The PC and Xbox versions were also tested.