JETT: The Far Shore is a sombre and reflective meditation on survival, and the morality of how far we’ll go to preserve our future.
Nicholas Kennedy 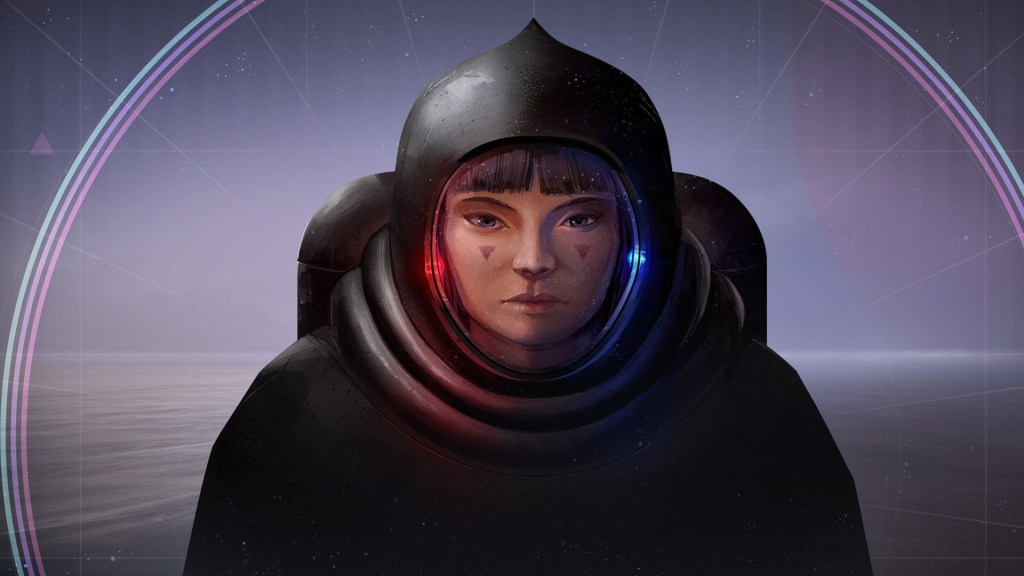 As you turn and cast your eye across the solemnly singing crowds below you, the history of the world you are leaving behind is consolidated into a single image. A people, united in mournful hope, gather below smoke-stacks which billow black against the sickly sunlight – they’re here to watch you leave them. To get to this point, at the dice throw of your species’ final chance, it cost this world, and these people, everything. Hundreds of years and thousands of lives. As you flew across the bay, from the steppes of your home village toward the cosmodrome of your departure, you skipped over massive metallic structures and freighters, some moored on sandbanks uncovered by the evaporating sea. This world is in a state of palliative care, but you will not be here to see it succumb. You are Mei, a mystic and a jett scout, and you belong to the future.

When Superbrothers, the creators of JETT: The Far Shore, released their first game Sword & Sworcery EP in 2011, it felt like a game brimming with optimism in its own dreamlike, mythical way. It was one of the first games of its kind designed from the ground up for touch controls; it dazzled with its astounding pixel artistry and soundtrack; and it allowed players to share their progress in the game directly to social networks, with each line of dialogue never overstepping 140 characters. Ten years, however, is a long time. When Sword & Sworcery was re-released on the Nintendo Switch at the tail end of 2018, all social network functionality was removed from the game, with the game itself explaining the choice as being due to the “catastrophic” effect of social media on the world at large.

Superbrothers are aware that their games do not exist within a vacuum; that they reflect the world around them as much as any other piece of media. So what does JETT: The Far Shore reflect?

Mei and her immediate crew mates serve as the tip of a spear. As the forward scouts of the Mother Structure, a massive spacecraft and the fruit of a centuries-long project to ensure human survival, you are tasked with colonising a planet that has been determined to be the source of something called the ‘hymnwave’, a religiously foretold yet scientifically confirmed phenomena. “A people reborn, in Ghoke’s dim glow” intone multiple characters over the course of the mission, referring to the massive sun around which your destination planet orbits.

Read: Sable Review: A Diamond in the Rough

It’s difficult to truly summarise all of the themes and determinations one can gather from JETT: The Far Shore, simply due to the deftness with which it morphs between moments of enormity and intimacy. The narrative interrogates openly the morality of survival, the unknowable nature of the universe, science with unending variables, religiosity in an uncaring expanse, and the act of meaning-making in the face of meaningless existence, just to name a few of it’s concerns. The gradient between scientific determination and religious belief is one that the game plays openly in, and it is viewed through the shoes of someone who is in the midst of a deeply religious experience. However, JETT doesn’t falter into reactionary and tired tropes of religious fervour or an irrational belief. The characters welcome this new world into themselves just as much as they impress themselves upon it, and it’s in that relationship that JETT: The Far Shore becomes a powerful narrative experience.

You’ll spend much of the opening hours of JETT: The Far Shore perplexed. Proper nouns and foreign terminology wash over you, steeping you in an urgency and determination that, while no character stops to explain to you their emotional states, you feel them all the same. The mournful departure of a planet resigned to collapse; the tense, hopeful arrival at a new world,  the anxiety-inducing first impact on alien soil. Much like Sword & Sworcery EP, musical direction and visual storytelling dovetail astoundingly well here; following the spacecraft as it erupts out of the cosmodrome, watching the years confrontingly accumulate as you realise the distance that now exists between Mei and the grieving parents she left on the steppes. Superbrothers and composer scntfc give every moment of the narrative a sonic counterpart, and vice versa.

It’s when the titular spacecraft themselves actually touch down on the planet that would be humanity’s new home where the philosophical ideas behind JETT are given mass. “Our Jetts are alike to a dragonfly” comments your co-pilot Isao as you skate across the environment like some cross between an airborne insect and a skipping stone, managing your thrust and engine stability while weaving and cresting across the landscape. The friction of controlling these jetts will hit most players as restrictive at first; but JETT uses both the scale of its world and the momentum of these crafts to invoke a feeling somewhere between a sci-fi racing simulator, a narrative adventure game, and Monster Hunter. At the end of my time with the game, I was simply in love with how these things moved and curved with such velocity.

Dotting the landscape is the natural flora that reacts differently to small pops of thrust which launch your jett upwards or sideways, depending on your direction of travel. Pop over a patch of ‘ghokebloom’ and you’ll be launched into the air; pop other plant life and they’ll release gases that subdue local wildlife. Fissures in the earth release vapour which can be used to keep your jett’s engine from overheating, and eventually you’ll be able to bank the resource and release it at will.

The ultimate goal of Mei and the other jett scouts is to collect data about this new planet and synchronize that information back to the Mother Structure, with a ‘leave it as you found it’ approach overarching the mission. JETT comments openly on the possible futility of this directive; just look at the planet you abandoned in order to start fresh, 1000 light-years away. You’ll scan life-forms and other landmarks, unlocking more information about each with every new encounter, but unlike the similar categorisation mechanics in games like No Man’s Sky, your physical impact on this new world is something the jett scouts are very hesitant to increase.

The violence and unsustainability of those black, billowing smoke-stacks begin to take on a form alike to Chekov’s gun in your memory. How long can you last, battered by the alien nature of this new home, before you push back? How long will you hide in the shadowed hillsides as the deadly, magnetic light waves of this galaxy’s sun rain down? How many times will you allow the wildlife of this place to disrupt your efforts to establish yourself? How long until the sky is stained black once again?

While your people were supposedly called to this place by the welcoming promise of the hymnwave, “an impassive cosmos is the only cosmos I’ve ever known” an uncertain Isao will intone.

By the culmination of the story, I couldn’t shake the feeling that the space-farers of JETT were haunted. Haunted by belief, haunted by their history, dogged by questions of moral culpability as they strive to outpace oblivion. They are a sober, determined few, attempting to both change and maintain their sense of self after a complete moral failing on the planet that was supposed to be their home. You are told at the game’s opening that you belong to the future, but confronting the nature of that future is what JETT is all about.

The PlayStation 5 version of JETT: The Far Shore was provided and played for the purposes of this review