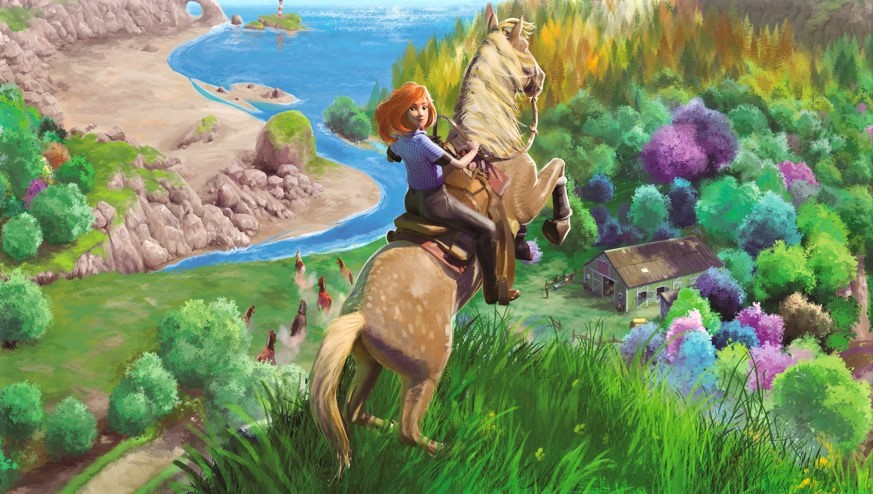 Picture this: you’re riding on horseback through an open field, the wind blowing through your hair, the sound of birdsong filling your ears. You slow as you approach a crystal-clear pond full of lily pads and cattails. You dismount from your horse to take in the scenery and pick an apple from a nearby tree. How idyllic. Or it would be, if your horse didn’t suddenly disappear in a puff of dust, shooting up into the sky and levitating on a tilted axis.

Horse Tales: Emerald Valley Ranch – part adventure game, part horse ownership simulator – is filled with juxtapositions like these. It entices you with its open-world exploration and unique life simulation, while simultaneously frustrating you with its imprecise controls and technical performance issues.

You arrive in Emerald Valley by boat with a letter from your aunt in hand, inviting you to visit the family ranch. You soon discover she has abandoned the ranch, leaving it in a sorry state – so you become its new custodian. There’s plenty of repair and redesign work to be done.

You have little more information than this to work with and as a result, Horse Tales feels somewhat bare-bones. It’s a game that wants you to create your own character, and gives you the space to project yourself into its world and mentally fill in the gaps. But the absence of narrative and characterisation extends throughout its setting, and into the lives of the characters you encounter, resulting in a world that feels empty.

The key supporting characters you befriend are all archetypal; Matteo the woodsman, Gabriel the mayor’s son, Lilli the snobby rich girl rival. They get very little introduction and minimal development after that, so you don’t get to know them in any meaningful way. There aren’t any other NPCs wandering about the world either, so areas that should be populated feel like a ghost town.

I found myself wishing to be pulled into the world more. I wanted something to grab me and drag me in – be that an interesting storyline, or new items I desperately wanted to craft – but it just didn’t happen. The most enjoyment I found in Horse Tales was in forgoing the critical path and carving out my own.

There’s a good few hours of enjoyment to be had in exploring the map freely. Though it appears small at first, being concealed by cloud cover until you scout new areas, it is surprisingly vast and varied; from rolling green fields, to dark forests, sun-scorched ravines and secluded beaches. There are a variety of crafting ingredients and recipes to find hidden in secluded corners, too.

The open world of Emerald Valley is the real standout of Horse Tales, and you can’t explore it without the help of your chosen equine bestie. Navigating environmental obstacles requires more agility than you possess. Where travelling on foot is slow and awkward, riding on horseback is fast and convenient. Unfortunately, the controls leave much to be desired here.

When moving at high speed and weaving through obstacles, it can be difficult to maintain control of your horse. The camera needs constant adjustment and the horse controls feel clunky and unresponsive at times. I often got snagged on objects mid-gallop, or found that my jumps were somehow mistimed. If you even slightly graze an object as you run past it, your horse will come to a complete stop, and you’ll have to build up momentum again. If you don’t perform a jump perfectly, your position is reset and you’re set back a few metres.

To make this more challenging, your horse gets dirty when you bump into obstacles – so, constantly. You can’t just ignore your horse’s cleanliness either because ‘a well-groomed horse recovers from exhaustion quicker’, according to the game, and stamina is important to maintaining speed. Depending on the order you tackle quests and explore the map, it can take a while to unlock the recipe and find the items required to make the washing station. The short-term solution is to lead your horse into the water – but this quickly becomes tedious.

All of this contributes to making horse races – an integral part of the games’ events – frustrating. The gap between victory and defeat can be seconds, and any one of these minor slip-ups will cost you time. Cleanliness affects the fame you gain from races, too.

When I finally won my first race to advance the main quest, I only felt irritated. It’s a shame that such a crucial part of the main story is so annoying.

Aside from control gripes, Horse Tales has a number of minor technical issues too – though none were game-breaking. I experienced a levitation event similar to the one described earlier within mere moments of starting the game, and choosing a horse. Another glitch caused my character to be thrown off their horse and away from the track as soon as a race started. Another sucked my character through the ground momentarily, and then spat them back out again.

Horse Tales: Emerald Valley Ranch bites off more than it manages to chew. It has the makings of a grand immersive adventure and a detailed life simulator, but it doesn’t excel enough in any of its core elements. Between the lack of a fully actualised world, flawed controls and technical glitches, I had to work hard to feel invested. There’s a certain charm to its overall style and environments, but its issues greatly hinder the horse fantasy it wants to foster.

The PlayStation 4 version of Horse Tales: Emerald Valley Ranch was provided and played for the purposes of this review. GamesHub has affiliate partnerships. These do not influence editorial content. GamesHub may earn a small percentage of commission for products purchased via affiliate links.