Grow: Song of the Evertree Review – Off to work we go

Grow: Song of the Evertree is an earnest, calming game full of pressure-free busywork, where you can find pleasure in routine.
David Wildgoose 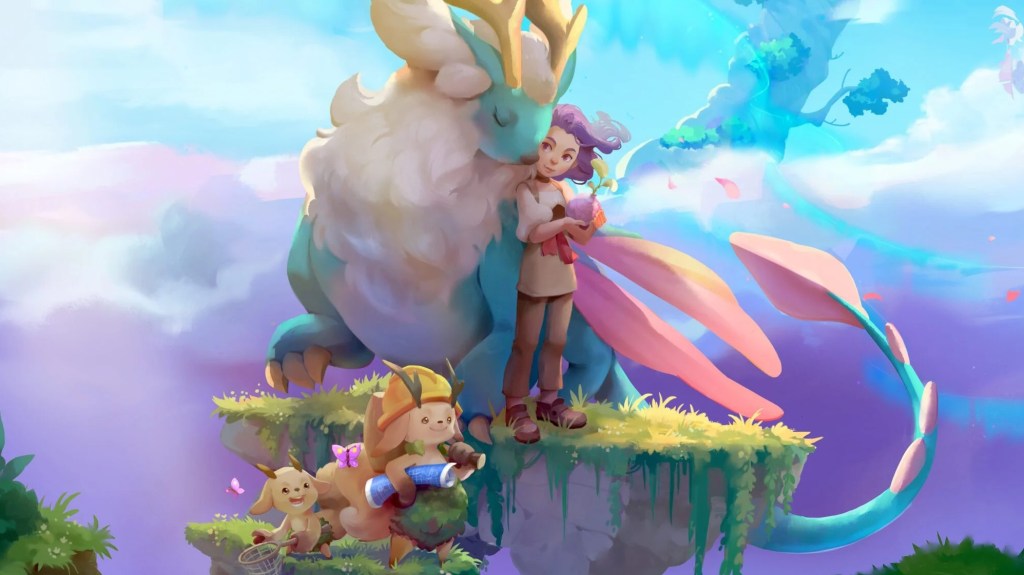 For the whole time you’re playing Grow: Song of the Evertree, a button prompt lingers on the bottom right of the screen. ‘Find work,’ it quietly insists. Press it and a sparkling trail of light will guide you towards the nearest task. As other actions and verbs come and go – inviting you to plant, shake, talk, water, and so on, their context-sensitive button prompts changing as you travel about the world of Alaria – the dogged demand to “find work” remains.

Grow is a game of chores. As an apprentice alchemist, tending to the Evertree is your primary responsibility. Towering above the town of Alaria, its branches support new worlds for you to nurture. The cycle of life repeats: Plant a seed to birth a new world, nurse it to full bloom then send it on its way to make space for a new life forged from the essence of the old one.

At every step, you’re watering shoots and plucking out weeds, chopping and hammering, petting and singing, repeating the same handful of routine tasks to encourage each world to realise its full potential. What begins as a rough patch of dirt ends in a sprawling, rainbow-coloured forest brimming with fruiting trees and budding shrubs, home to all kinds of bugs and critters, and dotted with mysterious caves and curious puzzle-like contraptions.

Back on the ground, the town of Alaria is similarly renewed as the Evertree above returns to life. Each day, people arrive at the airship docks keen to join the community you’re now leading. Housing them is as simple as dropping down a foundation on some vacant land and the next morning they’ll have a bed and a roof over their head. Townsfolk can also be assigned a job at whatever workplaces you build – from inns and bakeries to libraries and hair salons. And although it’s more efficient to find them a role that complements their skills, anyone can do any job.

Read: Grow: Song of the Evertree forgoes purpose for freedom

There are no pressures applied when it comes to managing your township, other than a cap on the number of structures you can build and the sheer physical space at your disposal. Instead, the emphasis is on letting you get on with things at your own pace.

Want to cram all the houses together and invite the first 20 people you meet to move in immediately? Go for it. Prefer to take your time placing each home and garden precisely so, adding decorative flourishes here and there, and leaving certain lots empty until you meet that barista with just the exact combination of skills your cafe needs? You’re not only welcome to do so, but you’re not penalised in any way for a leisurely approach.

With its day/night cycle meaning you can’t visit the Evertree once the sun goes down, Grow settles into a steady rhythm. Morning is spent visiting the various regions of the town to greet new arrivals and check in on old friends. There are chores here, too, as townsfolk often have an errand for you to run, little pieces of busywork that are completely inessential yet keep things ticking over. If nothing else, they provide a further small incentive to wander through town and admire your creation.

Then it’s off to the tree itself to potter around, spurring each new world to grow and collecting the resources they produce. Each night you return home to your alchemist’s grotto to extract the essence of these resources, which are then used to improve the town and also create new seeds from which new worlds will grow.

There’s immense pleasure in the establishment of this routine. Moving back and forth between the tree and the town, and returning home to sleep at the end of the day, it soon wears into a predictable and comforting groove. You’ll return to each Evertree world maybe a dozen times to coax it into its final, fullest form, and on each visit, you’ll encounter a delightful mix of the familiar – stopping to rub the belly of that furry, four-legged friend rolling around in the grass –and whatever surprises await on the fresh terrain inspired by your previous trip. Eventually bidding farewell to a world you’ve watched grow up is a bittersweet moment, though you can opt to keep it around if you find yourself unable to say goodbye.

Environmentalist themes permeate Grow. The Evertree requires healing because the world has been stricken by a poisonous force known as the Withering. And it transpires that the alchemists of yore were ruthless in exploiting the land’s resources in order to fuel their technological developments, and accelerating the Withering itself. The parallels with today’s climate crisis are obvious – if a little on the nose.

Yet for all of Grow’s earnest intentions, it struggles to reconcile its thematic perspective with what it’s asking the player to do. It seems to want to convey the sensible ideas that to look after the world is a group effort, one that requires us all working in harmony, and to make sure we’re not taking from the world more than we’re putting back. Yet neither of these concepts feel supported by the game that ostensibly underpins them. You really are doing everything by yourself, and for all the talk of how your actions are nurturing the Evertree, you’re still just extracting resources from the land – only you’re apparently doing it in a way that is somehow good?

Thematic inconsistencies aside, Grow has its heart in the right place. It’s a constant delight and a calming place to visit. Ultimately, it may be little more than a glorified checklist of chores, but as you venture outside to “find work” once more, sometimes labour is indistinguishable from leisure.

The Nintendo Switch version of Grow: Song of the Evertree was provided and played for the purpose of this review.