The latest from Tango Gameworks boasts excellent environment and enemy design, but spends too much of its supernatural journey leaning on repeating tasks.
Edmond Tran 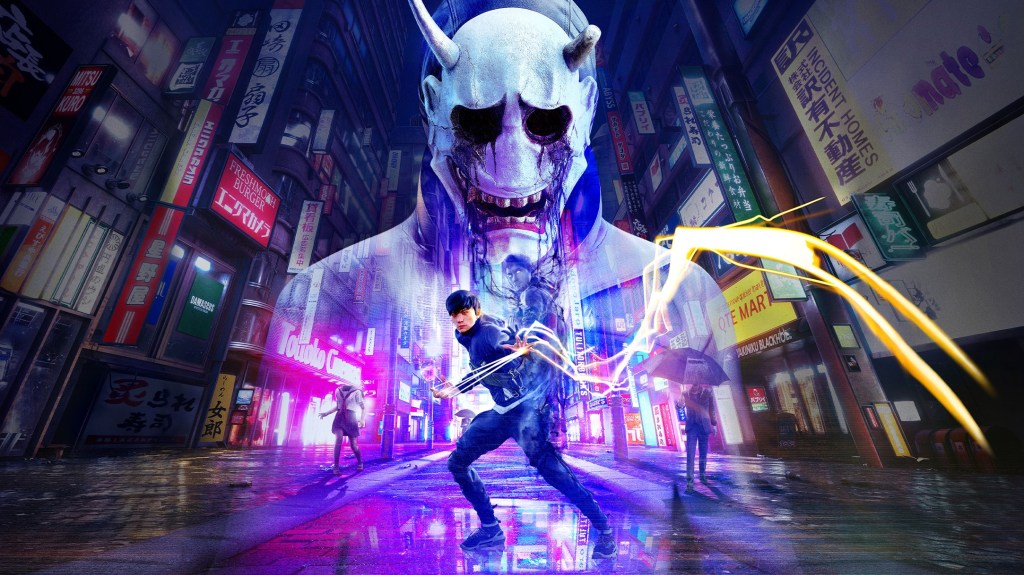 Ghostwire: Tokyo is an incredibly alluring game. It possesses a detailed and impressive open world recreation of Tokyo’s Shibuya district, the world is haunted by a menagerie of spirits and demons both horrific and friendly, and protagonist Akito wields a kind of Shinto magic that is performed with stylish flourishes and cool explosive effects.

But for all of its artistic mastery, and its wonderfully unsettling haunted house setpieces, Ghostwire: Tokyo is plagued by a more threatening spectre: monotony. It’s a game that leans too heavily on repetitious open world tasks that ultimately sap the life from all the excellent, spooky things it does well.

Ghostwire: Tokyo begins with protagonist Akito being possessed by the spirit of K.K., a deceased member of a supernatural investigation group whose presence imbues Akito with magic powers. With the population of Shibuya suddenly spirited away in a rapture-like event, Akito is pulled right into the middle of greater goings-ons, events which his sister is also tied up in.

Exploring Tokyo throughout the investigation is a very compelling reason to put on a brave face and deal with all the ghostly happenings. The recreation of Shibuya is believable, true-to-life, and filled with intricate details that satisfy the curious attitude that comes with first-person exploration. Despite no longer being populated with human beings – though their clothes eerily litter the ground everywhere you go – there is a distinctive atmosphere to the city. Neon signs light up the night, weather effects set the tone, and it’s all amplified by tasteful post-processing effects and cinematic flourishes, which make things even more convincing. The incredible execution is a virtual tourist’s dream.

In your journey to track down the game’s big bad, you’ll go beyond Shibuya’s iconic shopping districts and head indoors to explore a number of fantastic locations possessed by occult forces. These wonderful setpieces are unnerving and incredibly well-constructed, a symphony of disorientation and unnerving environmental effects that exemplify the developer’s pedigree in horror, with nary a cheap fright to be seen.

Their effectiveness is especially notable, given Ghostwire: Tokyo’s primary focus on action combat. This is a game where the monsters you come across are absolutely meant to be dispatched with a brave face, either with basic stealth techniques, or with Akito and K.K’s swath of fighting abilities.

At its best, fighting large mobs of headless schoolchildren and monstrous, scissor-wielding demons is an exciting exercise of crowd management and resource juggling, as you switch between three different types of elemental attacks and various talismans with debilitating effects, while making snap judgements about when to try and conjure more powerful attacks, when to drop everything and block, and when to go in for a takedown.

But one of Ghostwire: Tokyo’s main issues is the time it takes to both access the breadth of these abilities, and getting them to a point where certain abilities become efficient enough to rely on during battle. In the beginning, combat is simple, and there just isn’t enough variety to keep things interesting. It’s not until the middle of the game that you obtain a full suite of new tools, and things get more involved. Until then, your combat techniques are painfully slow, with key mechanics like enemy takedowns (if you expose an enemy’s core, you can choose to finish them off with a prolonged execution manoeuvre) taking a bit too long to feel like a sensible choice, as they leave you vulnerable to more attacks.

An ability upgrade tree exists, but what’s baffling is that it’s primarily filled with options to increase the speed of these combat abilities, and sometimes, in very specific circumstances – increasing the speed of melee, ranged, and ground takedowns are all separate options, for example. The fact that it represents the bulk of upgrade options makes the whole process feel uninspiring and needlessly prolonged.

But what’s more troubling is the fact that there are no genuinely interesting ways for your combat abilities to evolve once they’ve reached that decent level of performance, which really puts a damper on your motivation to seek out experience and upgrades during the second half of Ghostwire: Tokyo. The combat toolkit you eventually conclude the game with still feels like it’s just the beginning of what could be so much more – only there’s nowhere else to go.

Beyond its spooky supernatural scenario, Ghostwire: Tokyo takes a lot of comfort in settling into the tried and true template of open world games – there are plenty of things to collect and icons to chase. A number of standard open world activities litter Shibuya; you’ll find and purge Torii gates in order to gain access to more of the map and reveal nearby activities, sidequests will largely send you into combat scenarios, there are a small variety of yokai to capture in each region, a bunch of hidden tanuki to find, dogs to feed, cats to placate and plenty of lost spirits to gather, which help Akito earn ability points.

The act of gathering those lost spirits, which serves as the most generous and efficient way to increase Akito’s power, feels bizarrely and unnecessarily prolonged, much like the the game’s upgrade system. The motions of capturing spirits takes a handful seconds at most, but when the game enticingly litters so many of them through the world, those seconds can feel egregious. That you can spend ability points to lessen the amount of time it takes to perform this act feels like a knowing and needless choice in the game’s design that, even after fully upgrading, can still remain a speed bump late into the game – many spirits will be plagued with ‘afflictions’ which need to be removed with a mini-game before they can be captured.

In fact, by the time you reach that late-game point, all of those open-world activities, which maybe have been unexciting but otherwise inoffensive at the beginning of the game, will also begin to feel needless. As the fast-moving plot of Ghostwire: Tokyo continues, the game spends less time pushing you into interesting and spooky setpieces, and instead leans much more on repeated combat encounters and open-world activities to push events forward.

For example, after a major plot event late in the game, you’ll open up your map to witness about a dozen new torii gates pop up around the city for you to cleanse in order to get to the next phase of the game. Most of those gates will reveal new side quests and activities, but at this point in Ghostwire: Tokyo, there’s little need for the currency and experience points they provide, with the self-contained stories they tell ultimately not worth the drudgery inflicted by doing the same thing once more.

The one saving grace in the late-game is unlocking the ability to grapple to the top of any skyscraper at will, which, when combined with Akito’s ability to glide through the air, makes the game’s simple traversal from place to place more exciting. But by and large, Ghostwire: Tokyo feels as if it’s exhausted most of its ideas before it’s half over – and it’ll take about 20 hours to complete the main campaign and all of its side quests.

Ghostwire: Tokyo’s open world city is beautiful, and its world-building, environment and creature designs are also excellent. But even with a sensible runtime and a brisk plot, the game spends too much time engaging you in repeating, unchanging, and unexciting activities. It’s the terrible and taxing curse of open world monotony, plaguing a piece of work that otherwise has so many unique and original ideas.

The PlayStation 5 version of Ghostwire: Tokyo was provided and played for the purposes of this review.