Dinkum is a life simulator set in a ‘fictional’ version of Australia. But that's no reason to ignore the history of First Peoples.
Nich Richie 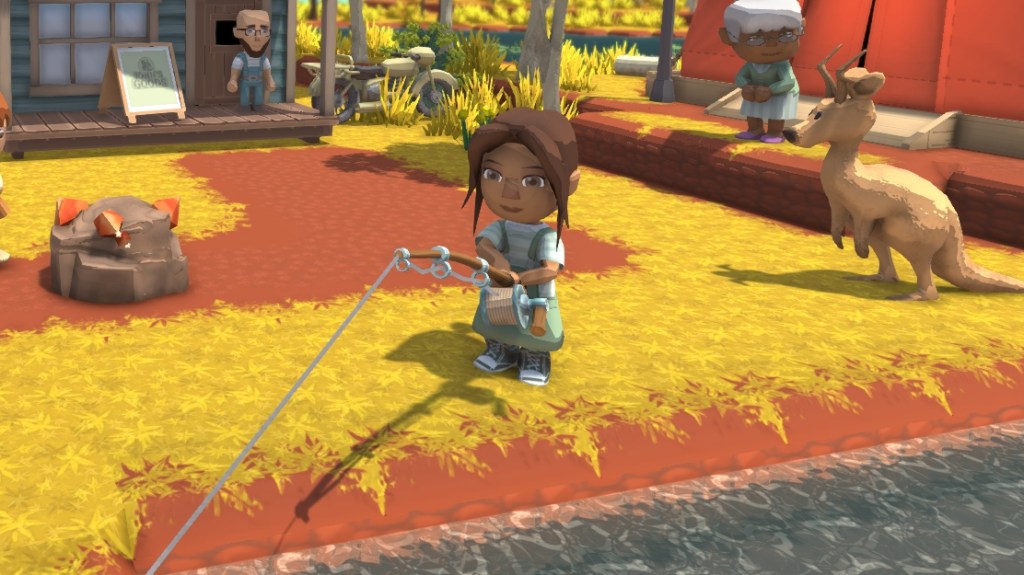 First Nations People exist. That’s it. That’s the one line that can’t be argued, or shouldn’t be able to be argued. Indigenous Peoples are everywhere in Australia, despite the many attempts at genocide throughout history.

While this isn’t a hard concept to grasp, many video games made and set in Australia fail to understand or represent this. Forza Horizon 3 transformed Australia into a racing stage, which is gross, considering the history of sacred Indigenous sites being turned into race tracks or amusement parks.

Borderlands: The Pre-Sequel represents the moon as Australia. While containing a lot of humorous dialogue referencing the colonial history of Australia, it fails to pay respect or acknowledgement to what happened to First Nations People as a result.

Ty the Tasmanian Tiger is a game that succeeds in some ways, and falls short in others. Although it falls into the trappings of being a colonialist video game, ultimately appropriating aspects of Indigenous Cultures in its gameplay elements, it at least makes references to First Peoples mythology, the Dreamtime – albeit in a simplified respect.

Dinkum, currently an Early Access game, offers an experience similar to Stardew Valley and Animal Crossing, paying homage to both in design. All while being set in a fictional, and apocalyptic, version of Australia.

So what do you do in Dinkum? Well, it can be summarised in one word:

As you set forth on this land inhabited by Kangaroo, Emu and Crocodiles, you’re expected to tame the land by learning how to farm and hunt, and work on building a settlement. But don’t worry, there’s nobody else here – so it’s all territory for you to claim. That being said, on the land that is being settled, you will eventually find remnants of the past indicating the post-apocalyptic nature of the game. You can dig up things from the ‘modern Australia’, yet this presents an even larger issue to me: The only artefacts of the past are of the colonised Australia with no reference to First Nations People? Also, suggesting that the world’s longest-living culture could not survive a capitalist apocalypse? It all feels so wrong.

Terra nullius means ‘nobody’s land’ and was a term used by the British to justify the colonisation and settlement of what would become known as Australia.

Terra Nullius was not only used as justification for colonisation, but also justified the British beginning 200+ years of genocide: Hunting parties were organised to hunt and kill Indigenous People; massacres were officially registered and conducted; children were stolen; enslavement and blackbirding were prevalent. These are just a few reasons why even the suggestion of Terra Nullius is a big deal.

Dinkum starts with this. This fictionalised view of Australia is empty, belonging to no one, and free to be settled by you.

A recent Twitter thread by @alex_verdant brought many eyes to the problems in Dinkum. In particular, they noticed some extremely troubling dialogue, and provided screenshots.

Dinkum makes jokes about the trading of children for cutlery. Now, it was actually @alex_verdant’s Twitter thread that pushed me to play the game myself and investigate, however, when I personally came to the same scene, it seemed as though this dialogue was silently changed:

But to write a joke like this in the first place suggests ignorance to First Nations Peoples and their history at best, and malicious intentions at worst.

Here’s why: First Nations People in Australia suffered several genocide attempts, with one attempt becoming known as the ‘Stolen Generation.’

This assimilation was an initiative to essentially enslave children, and have their ‘Blackness’ forcibly bred out over generations. A genocide attempt. As part of this, many Indigenous children were also traded between colonists for various things – including household goods.

In any other game, a line of dialogue about trading children for cutlery might seem like a lighthearted joke. But with so much of Dinkum clearly rooted in the Australian landscape and culture, this line is anything but. It is weirdly specific and very hurtful. It might come from a place of ignorance, but that doesn’t make it any better.

While investigating the development of this game, I discovered that people had been asking Bendon if Dinkum had First Nations representation, to which he responded: ‘I agree that having elements from the many Indigenous Australian cultures would only make the game better. I don’t identify as an Indigenous Australian, so I thought it would be inappropriate to take elements from their culture.’

Some would say this is fair. But as a First Nations person, I challenge this response and offer the following points for anyone making a game in Australia, or a game that references Australia.

With that last point, let’s make this absolutely clear:

It is to perpetuate the myth of Terra Nullius.

And it is to erase First Nations Peoples.