VTubing is often misunderstood, but it has the power to free creators and give them a new way to connect with their audiences.
Leah J. Williams 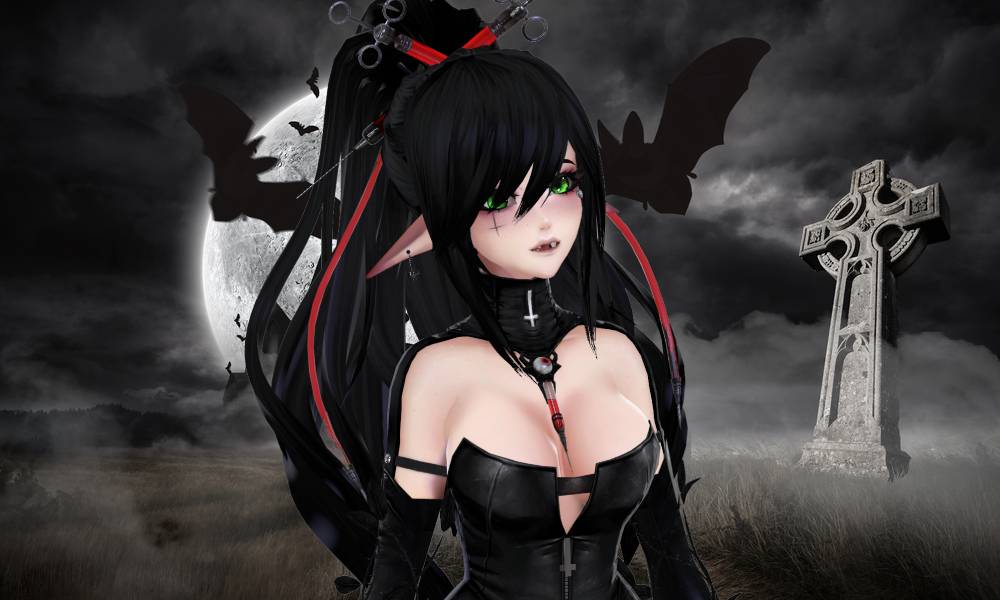 VTubing is a fresh evolution of live streaming – a way for creators to connect with their audiences via a new, interactive medium. Rather than being on camera, VTubers instead embody an avatar, a 2D or 3D character that viewers can interact with in a form of live action roleplay. It’s not a new idea – but it is one that’s gained traction over the last two years as VTubing has become more accessible and common in the world of streaming, on Twitch and other platforms.

While virtual bands and performers like Gorillaz and Hatsune Miku and laid the foundation for digital characters that crossed into reality via projection, holograms and complex motion tracking, it wasn’t until the global pandemic that the global popularity of VTubers began to rise.

Popular Canadian streamer Pokimane is credited for encouraging this growth in the mainstream, having briefly adopted a virtual persona in late 2020 as she returned to streaming following a short break. Inspired by originators in Japan, Pokimane described her new VTuber persona as an ‘experiment’ – a freeing one.

Female streamers are often expected to present as ‘perfect’, with expensive hair and makeup done to better appeal to their audience. This process is strenuous, and Pokimane said that not having to put this on helped her have a more relaxed stream, and a layer of protection from the real world.

For any streamer, being in the public eye is a major risk – and bullying, rude comments and aggressive propositions are typically common. Using an avatar in place of being on camera meant that streamers could act as hyper-real characters divorced from the real world, free of obligations and the need to look a certain way.

In the process, they tended to gather larger audiences as people flocked to unique or cool-looking characters.

The most popular VTubers are typically anime women, who present an ideal to their audiences. Some have large, exposed breasts, or flashy outfits that couldn’t exist in the real world. Some are inspired by fantasy, and have cat ears or tails. Some are just cute anime girls who emote and laugh as their streamers do. The depth of characters in VTubing is huge – to the point where people can pick and choose their favourite personas to interact with, whether that be a goth princess or a wholesome pop idol.

In a time when loneliness is common, thanks to countless coronavirus-induced lockdowns and prolonged quarantine periods, VTubers provide an escape from reality. They provide a virtual friend, or just entertaining background noise. For streamers, they also provide a welcome escape.

LaynaLazar is one of New Zealand’s most prominent VTubers on Twitch, but her path to success wasn’t an easy one. While she had been a regular, on-camera streamer for some time, illness forced her to take a major break and re-evaluate how streaming fit into her life in 2021.

‘I was really sick at the time – I have ulcerative colitis and oftentimes, I had to just take breaks from streaming because I’d get quite sick,’ Layna told GamesHub. ‘I was like, there’s got to be a way that I can continue to do content without having to dip out because I don’t want to be on camera.’

VTubing provided an escape for her – a means to stay connected to her audience without the need to ‘put on a face’. It allowed her to take breaks while she streamed, and to feel less conscious about feeling sick. With so much pressure put on streamers to be perfect, creating a VTuber persona that reflected her, and allowed her to feel both safe and comfortable, was essential.

This is how Layna Lazar, the Blood Mother, was born.

This VTube persona is a vampire demon with two alternate forms: a young gothic woman, and a terrifying, clawed beast with an exposed chest cavity. According to LaynaLazar, both forms of her avatar were inspired by her experiences with illness.

‘Not only do I like horror, but back in the day, I spent four months in hospital and was almost on my deathbed,’ Layna explained. ‘I think I’ve had, to this day, maybe about 27 blood transfusions. So my world is very much hospital-esque.’

The Blood Mother holds a mirror to these experiences; her hair holds multiple syringes, and her ‘beast’ form features an open chest and a hanging intestine – representative of Layna’s struggles with inflammation.

‘At first glance you look at it and you’re like, that is so disgusting … but for me, I found a way to embrace the things that made me not want to stream anymore and turn it into something positive.’

As a horror fan, Layna was also inspired by the works of Junji Ito and classic Hollywood films like Nightmare on Elm Street, Halloween and Chucky. All of these informed her design choices, and helped her shape an avatar that allowed her to reclaim her life experiences.

‘[Vtubing] has given [streamers] more of an opportunity to be more of ourselves than we ever would be on camera,’ Layna said of the Blood Mother’s creation. ‘I found that when I was on camera, I was hyper aware of what I looked like, or where my hair was sitting, or what angle is was being looked at, or how I was expressing myself.’

‘With VTubing and having this persona that I’m comfortable with, I think that real part of me can really come out and shine, and [I can] feel more comfortable and communicate clearly with my audience in a way that I feel comfortable with.’

How LaynaLazar created her Vtube persona

LaynaLazar’s background in 3D artistry played a pivotal role in creating the Blood Mother Vtuber persona. While typically, VTubers will commission artists to realise the visuals for their character, Layna was able to experiment with her own tools and nail down a look she loved before working with other, specialised teams.

‘When I started, I started with VRoid [Studio], and I didn’t need anything. It was just a program [where] everything was ready to go. I just needed to either have someone [create the character] or do it myself,’ Layna said. ‘I used a webcam to use my movements, and a mic to open and close the mouth when there was sound.’

While Layna was able to do much of the groundwork herself, she believes that more complex creations, including 3D characters with higher blend shapes, will likely require multiple people to work on it, and multiple technologies. To get set up, Layna required multiple programs, including ZBrush, Blender, Unity, VSeeFace and OBS – all of which needed to be understood and mastered.

‘I don’t know where I would be [without my 3D artist experience],’ Layna said. ‘I think that’s why the project was so fun, because I had already been studying and been doing the game/3D pipeline for seven, eight years … It helps me communicate with the people I was working with, and know where we wanted to go with it.’

Alongside these tools, to actually perform as the Blood Mother, Layna is also required to use a rigged up Ultraleap, a hand-movement capturing device, and a webcam, to track her facial and body movements as she streams on Twitch. Other creators use similar tools like GoPros and 3D printed models to create a better and more realistic tracking for their characters.

This helps audiences get more involved and engaged during streams, and creates the ‘suspension of disbelief’ needed to host an impactful, believable show.

But while Layna’s chosen 3D avatar and performance is fairly complex, she believes that doesn’t need to be the case for everyone. With VTubing tools becoming more accessible and cheaper for everyone, there’s endless opportunities for those looking to create their own simple Vtuber persona and just get started.

VTubing is becoming more accessible for everyone

‘I think that the misconception people get in VTubing is they have to have the top of the line Vtuber aesthetic … it’s very expensive … I honestly didn’t even get paid that much for doing it for so long,’ Layna explained. ‘However, on the other end of the spectrum, it doesn’t take much to even start. You can still be a PNG VTuber … with different facial expressions.’

‘A lot of people are learning to just do the art themselves, or someone else does the artwork and you rig it. There’s lots of room on all fronts. So it doesn’t have to be expensive if you don’t need it or want it to be.’

Once a particular VTuber persona is chosen, drawn and rigged in specialist programs, it’s a simple matter of connecting VTube Studio for a 2D persona or VSeeFace for a 3D model to a streaming program like OBS. It doesn’t have to be complicated, and those who wish to commission artists only require a basic understanding of the technology.

While the process may seem daunting, there are many 3D artists and riggers currently working in the scene. Even if aspiring VTubers lack the creative ability to draw, or the technical skills to rig, there are plenty of people already working or learning to work in this specialist scene.

As LaynaLazar puts it, it’s also worth remembering that everybody starts somewhere, and that you don’t need to be ‘the best’ right off the bat.

As the popularity of VTubing continues to grow, it’s likely the accessibility and ease of using digital tools will also grow with it. The technology provides an opportunity for anyone to create their own unique personas, and to seek an escape through the magic of motion capture.

Streaming can be a daunting prospect for those with social anxiety or experiencing insecurity – but as a protective layer between audiences and creators, VTubing can be an incredibly valuable, freeing creative tool for everyone.