The Joy Of Creating A Pandemic Art Island in Minecraft 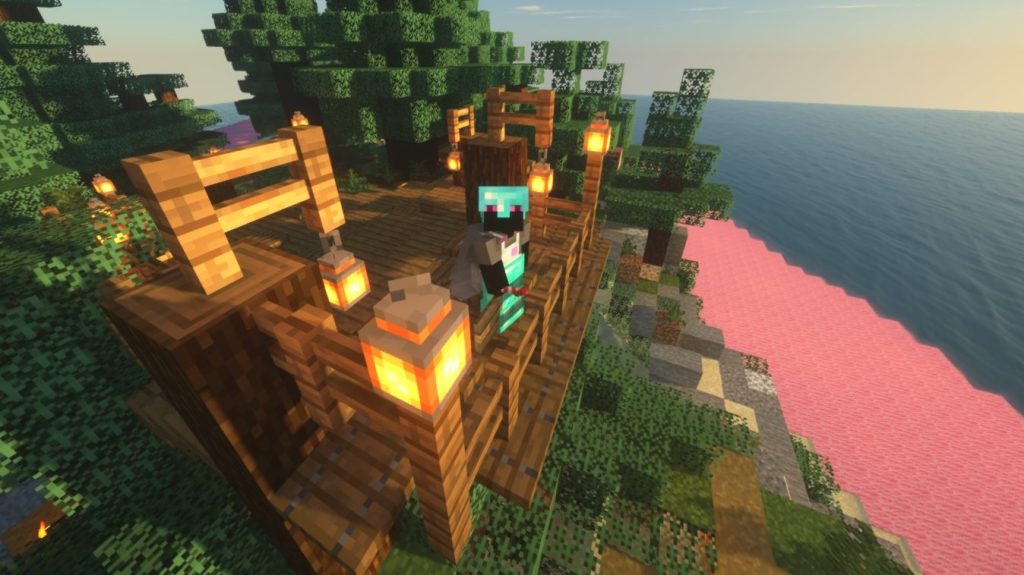 Art Island, a large-scale art project in Minecraft that has taken weeks of painstaking construction, has hit a snag after a few hours of productive building – there’s a turtle on the installation. A couple of different solutions are floated, including rowing the turtle to another island. Unfortunately, it keeps coming back. While the stubborn turtle conundrum is being dealt with, it has gotten dark, which means that creepy zombies have started shuffling in from the water. Some of them will explode and destroy the art. It’s enthralling, yet somehow very calming to watch.

For the past couple of months, during the latest round of COVID-induced lockdowns, my afternoon ritual has been watching writer and critic Hannah Jenkins play Minecraft on her Twitch channel, to a small but growing audience. Minecraft, as a game, is famous for being played in an almost limitless way, provided you have imagination and the desire to build things using blocks. Hannah has decided to use it to recreate large examples of real-life artworks, as a way to utilise her enforced time inside.

‘In the beginning, it was really specifically about recreating “land art” works. It’s a movement from the ’70s and ’80s, called “land art” or “earth works”‘, Hannah tells me.

With a background in art academia, it’s no surprise that her first instinct would be to make big art on Minecraft, instead of say, building a cool castle or fighting skeletons.

She continues: ‘It’s a particular kind of environmentally engaged sculpture, or interventions in the land itself. A really famous example are the artists Christo and his wife, Jeanne-Claude, who wrap things. They wrapped a Sydney coastline decades ago in sheets. There are jokes in The Simpsons about Christo.’

Read: The Australia Council for the Arts wants to fund videogames

Hannah’s first ongoing project (there are quite a few in the works, including a large flower-bedecked recreation of the Jeff Koons ‘Puppy’) is a lush island surrounded by a floating mass of pink carpet, a recreation of the 1983 environmental artwork by Christo and Jeanne-Claude called ‘Surrounded Islands’, in which the artists surrounding an archipelago in Miami with pink fabric.

Obviously recreating large-scale land art in Minecraft is easier than in real life – part of the allure of the art comes from the difficulty and logistics of creating. How to most efficiently wrap an island in fabric? And why even try? But Minecraft has its own set of relatively rigid rules that, while different to our own reality, create both difficulty and labour for Hannah to overcome.

‘It’s not just placing the blocks. We know we want to use glass blocks around the island, and then put pink carpet on them. Okay. We now have to go and make hundreds and hundreds and hundreds of cubes of glass. Okay. How do you make glass in Minecraft? Oh, you need sand, and you need to smelt sand to make glass. Okay. We need to go and find a desert biome and annihilate it, and get all of that sand to craft all of that glass, to place the glass. We have a field of pink sheep, real sheep in the game that we have dyed pink. And we just sit there, and we shear them to make woollen carpet to put on the island.”

For the uninitiated, Minecraft is not simply a game where you place blocks – it’s also a game of crafting, of finding raw materials and turning them into the blocks you need. It takes an intense amount of time and logistics to do, especially on the scale that Hannah is working. She also explains that a lot of the challenge stems from the fact that Minecraft is procedurally generated, meaning that the geography of the world you’re building in is basically randomized, adding both difficulty and opportunity.

‘You start a new world, and you don’t know what would be there, and if you walk 200 blocks, suddenly there’s a valley or an ocean, and you don’t quite know what the coastline is going to look like. I liked the idea of being able to explore, find a site that was naturally interesting, or naturally resembled a site that an artwork had existed at in reality, and then rebuilding that.’

While the end result is visually spectacular, and lovely to see, the real joy for both Hannah and the audience comes from watching her work out how to create these artworks in the weird and wonderful world of Minecraft.

‘There is a huge amount of problem-solving, I would say. And that’s the part that’s really satisfying. It’s looking at an artwork that exists in real life, and thinking, ‘Okay, how do I make these inherently curvy or flat things? How can I recreate something that is true to either the internal logic or the vibe of that artwork, when all I can work with is tubes, basically?’ It’s really satisfying to problem solve. And so with Art Island, the big thing there was okay, we can’t just float sheets of fabric out over the water. That doesn’t exist in Minecraft. How can we create something that gives that illusion instead, and that still feels the same as the artwork?’

‘We landed on this idea that you could surround land with cubes of glass blocks. And then on top of the glass blocks, you could lay carpet, because carpet is a block in Minecraft, but you can’t just put carpet on water. And so that allowed us to give the illusion that there was a flat expensive fabric, basically sitting over the water, while also making it supported, so that you could walk on it and everything.”

One of the reasons the project has been so interesting has to be around the idea of accessibility – while we’re in lockdown, we’re basically cut off from all art, especially public art, which is designed to be interacted with. Hannah, by taking the project not only onto the digital space in Minecraft, but streaming it daily on Twitch, has created a public component that’s really delightful to be a part of.

‘The labour is most salient to me than the product at the end. I actually really enjoy the building, the problem solving and the logistics of figuring out how to do something, and then actually doing it. I love doing that with a community,’ Hannah tells me.

‘Knowing that people are following that journey, that’s the thing that motivates me more than having the finished product. Getting real-time feedback when you’re three hours into a stream where you’re just placing glass or something — the ideas that we can come up with as a group are always going to be so much better than what I would just think up by myself, if I was just doing it by myself.”

The barriers between audience and artist are almost gone as a result, and what Hannah and Minecraft build in its place is a community of people just absolutely thrilled to watch some art get made out of blocks, as well as see how just one lone turtle can derail things.

You can follow Hannah’s continuing Art Island adventures on her Twitch channel.

Patrick Lenton is an author and journalist from Melbourne. He is a deputy arts + culture editor at The Conversation, as well as a freelance writer. He tweets @patricklenton