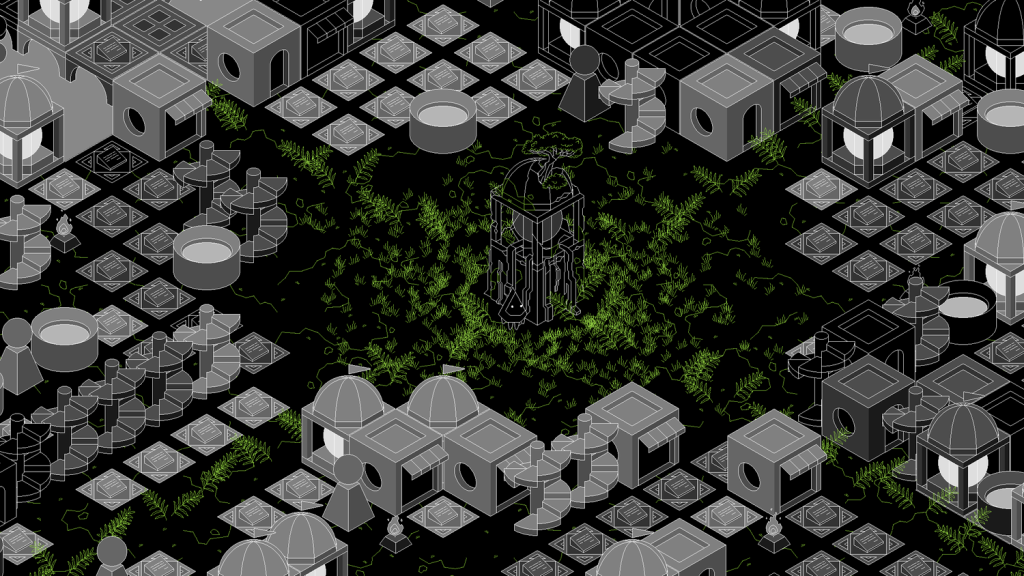 It’s rare to stop and consider the mortality of the internet. For some, it’s been a constant for their entire lives. For others, the introduction of the online world is still fresh in their collective memory. HYPER//ECHO is a digital exhibition for ACMI’s Gallery 5 that explores the ephemeral nature of all things digital. A work from Firepit Collective, the game explores how decay doesn’t only impact the organic, physical world – but the digital one, too.

The description for the exhibition delves into experiences with broken links, removed videos, and images in a way that almost lends itself to a genre I’d describe as Web 2.0 gothic: ‘things you thought would always be there, gone overnight.’

On entering HYPER//ECHO, which runs from 3 April to 1 July 2022, players are greeted with the sounds of howling winds and an atmospheric, somber soundtrack that reverberates across the map. Users control a cone-shaped avatar in a world that, on any given day, can be either a built-up metropolis of structures, bridges, and fresh cryptic notes, or rubble and ruin.

As you point and click to walk around the map, taking it all in, you can build and leave remnants of yourself behind. However, they too will degrade and decay. The map is littered with tablet-like notes containing faded, scratched-out symbols. What do they mean? What did their creator intend for them to mean?

The first thing I interacted with was a stone tablet with multiple wrench symbols and a thumbs up. Though all messages left by other lonely travellers are cryptic, I think it may have been an encouragement to repair the creations around me. Initially, I took on the role of explorer (and to some degree, builder) while investigating the lonely expanse that is HYPER//ECHO. However, after a while, I felt compelled to restore the failing structures around me. For some, it was too late and the messages were lost forever, husks of what they once were. Others were retrievable, and my efforts rebuilt foundations that would otherwise soon be gone.

The exhibition is, in part, a commentary on both the past and future of the internet, suggesting that the internet can be democratic and community-driven, with users partaking in the maintenance and preservation of spaces and artefacts. It calls to a human desire to pass down relics and knowledge, even if those relics are hyperlinks and chunks of code rather than ancient physical structures. This is in opposition to the foretelling of ‘Web3’, with Firepit Collective suggesting that the internet doesn’t have to be for ‘exploitative, speculative profit.’

Firepit Collective itself is a Melbourne-based ‘weird games and digital collective’, although members come from far and wide. The collective formed over the last year or two as a space for local Melbourne game developers to talk, but has grown into a large Discord community with people from across the globe that collaborate, discuss ideas or simply gather together.

Cecile Richard, one of the creatives behind the collective, led the HYPER//ECHO project. They’re a designer, and have previously created other games with similar themes like Topography. This late 2020 release explores the ‘golden age of Tumblr’ and the impermanence of the internet.

Richard says one of the key ideas behind the exhibition is that nothing lasts forever, even on the internet. This was in response to the ‘frenzy’ around blockchain and other new trends in the art and tech world.

‘There are ways to cherish ephemeral things, and constant growth is not reasonable or even that desirable.’

Jonathan Tree is also part of the team that worked on the project, working on music and sound design. He says another important message of HYPER//ECHO is the people behind technology or digital spaces.

‘Even when those things do exist for the brief moments that they do, they don’t exist because of some wonderful technology or some incredible platform. They exist because of the people that that make them exist.’

Games as a communication tool

Richard says one of the most ‘heartening’ parts of the user interaction with the title since its release is seeing people play the game, and come away with an understanding of what it’s about, with less emphasis on the reach.

Tree also says it’s been interesting to see how different people engage with the project, depending on their view of video games and the purpose they serve. He says even in recent human history, there’s been a change in thinking of video games more in terms of meanings they communicate and impart to players, rather than just consumer products. The experiences and attitudes of players reflect this in how they interact with HYPER//ECHO.

Communication is certainly at the core of HYPER//ECHO through the messages left behind, with those that have faded into near-nothingness still telling a story of sorts. Someone else was here, for a short while, and had something important to say.

In time, without the tireless (and often unpaid) efforts of those maintaining the digital spaces and servers around us, they too will begin to crumble like the structures in the game world, leaving behind residual fragments of what once was.

HYPER//ECHO is on digital exhibition until July 1 via Gallery 5, and will then become a part of ACMI’s permanent collection. You can play the game on the ACMI website.