How ‘Moving Out’ entertains us while the world stays in

A new game from Australian developers SMG Studio embodies the sentiment that the show must go on – even in a pandemic.
Jini Maxwell 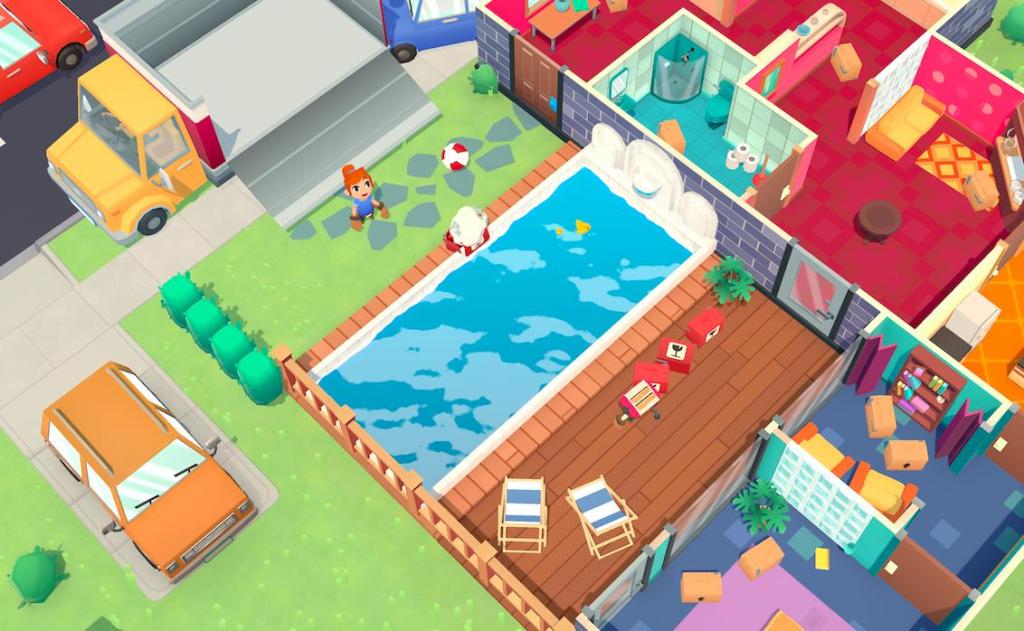 The Australian games industry seems to be faring a little better than the rest of the arts world. A recent IGEA survey of the impact of COVID-19 on the local games industry returned tentatively positive results. The inquiry states that ‘indicators of confidence include 44% of surveyed developers reporting stable or increased sales revenues, along with 62% reporting costs are remaining static. Overall, 55% of respondences are confident for the foreseeable future.’

But as social isolation becomes the norm, gentle, social games like Animal Crossing: New Horizons are experiencing a much wider uptake, as people look for ways to entertain themselves and to stay connected with friends. Australian games are no different – nevertheless, it’s a complicated time, to say the least, to launch any creative product, let alone one that is years in the making. Without the comfort of nostalgia on its side, what makes a new game do well in a pandemic?

Moving Out while staying in

On 28 April 2020, SMG Studio launched their latest and most ambitious title, Moving Out. The product of years of work from the Melbourne branch of the studio, which also has offices in Sydney and LA, Moving Out is a chaotic game about a familiar struggle: moving furniture. It’s a fun, family-friendly release; a chaotic co-operative game for multiple players that prides itself on inclusive design, including dyslexic-friendly fonts and adjustable difficulty settings, as well as options to create a character who wears hijab or uses a wheelchair.

The game encourages players to work together to move increasingly complex pieces of furniture from labyrinthine houses, farms, gardens, factories, and more, into the moving truck within the time limit. While it does have a single player mode, it’s designed to be played co-operatively, meaning that players take up each end of the couch, stove, or hay bale in question.
In a period of isolation, games like this that provide an escape and encourage social play, could be exactly what we need. We talked to Ash Ringrose, the co-founder of SMG Studio, about the studio’s experience of launching during a global crisis.

LAUNCHING IN A PANDEMIC

Ringrose says the studio was lucky not to have had development affected too badly. ‘The team were already on the second round of polishing by the time they had to work remotely, but the title was already finished and approved for all consoles – otherwise it would have been a real push!’

Rather than experiencing a dip or increase in sales across the board, SMG have mostly noticed that their sales have been different: ‘A few years ago, we released RISK: Global Domination, a digital version of the popular board game Risk. That game has online play, and each play session is more of a time commitment. We’ve seen its sales shoot up dramatically. People seem more willing to spend more time, as well as money, on social games.’

FUN TO WATCH AS WELL AS PLAY

Moving Out is also doing well with games content creators on YouTube and Twitch. It is brightly coloured, full of rich visual detail and physical comedy.

Ringrose said, ‘There are a lot of visual Easter eggs that the art team put in, thinking that most players might not even notice – but for streamers and content creators, those little moments make their stream much more interesting.’ He sees streaming as ‘a trend worth embracing’ for game developers, on the level of both marketing and design. During a period when many streamers are committing to higher intensity schedules, having a game that is replayable, reliably funny, and doesn’t risk spoilers for the audience is invaluable.

Ringrose said that the studio learned from their co-operative puzzle game, Death Squared, that puzzle-focussed games can cause some issues for streamers: ‘When you watch a puzzle game, you learn how the puzzle works – so a player might be less likely to feel inspired to try it out, and a streamer has to work harder to make it funny and fun. We worked hard to make sure that with this game, people who watched it would feel encouraged to play it themselves.

‘Once you’ve finished a puzzle game, you tend to put it down – but a game like this, you could play again and again.’

ACCESSIBILITY means fun for all

Ringrose believes that Moving Out‘s careful attention to accessibility is also key to the game’s appeal in lockdown. ‘We worked hard to ensure Moving Out was maximised for fun for everyone. The accessibility features in the game means anyone can enjoy playing it, regardless of familiarity with games, or physical capacity, or age. Instead of offering difficulty levels, the game offers players the option to map the controls to different buttons, to change the size of the UI, and options to avoid extensive button holding, or repeated button pressing.

Moving Out‘s extensive accessibility and assist options are outlined in this trailer.

‘In our earlier games we made sure there were plenty of options for text size, dyslexic-friendly fonts, and colour blind-friendly design, but during early playtesting for Moving Out, we realised that to make it truly “family friendly,” we had to go further. We’ve included adaptations to accommodate people with a wider range of cognitive and physical abilities.’

For Ringrose, accessibility options just made sense, given the social, silly appeal of the game. ‘it was so important to us that the whole family could play and have fun – whether you’re four years old, or 90,’ he said.

The power of sticking together

Similarly, the demand for co-operative games is rapidly rising. ‘We don’t have online play [for Moving Out], so we do get users saying “Oh, I can’t visit my friends to play!” but the flip side is that I’ve seen a lot more people looking for a co-op game to play with family or friends. While people can’t go to friend’s houses, there are a lot more families and couples looking for games to play together.’

Early development of the game was supported by Film Victoria. Of the game’s warm reception, CEO Caroline Pitcher said: ‘The thrill of digital games brings people together. Playing Victorian-made games for entertainment and education is a great way to stay connected and support local developers. Moving Out is a stellar game and one we are very proud to have backed.’

While this is all good news for SMG Studio, for Ringrose, it’s a complex emotional experience to parse. ‘I don’t want to be glib, or act like there’s a “good side” to what’s happening internationally. So many people are having a terrible time. I have this weird survivor’s mentality where I feel guilty that our company will get through this crisis possibly in even a better shape,’ he told Screenhub.

‘We’re motivated by what we can contribute to society: the fact that our work makes people happy, and can help people deal with the stress and boredom a little more easily.’

Moving Out is available on Nintendo Switch, PC, Xbox One, and PlayStation 4.