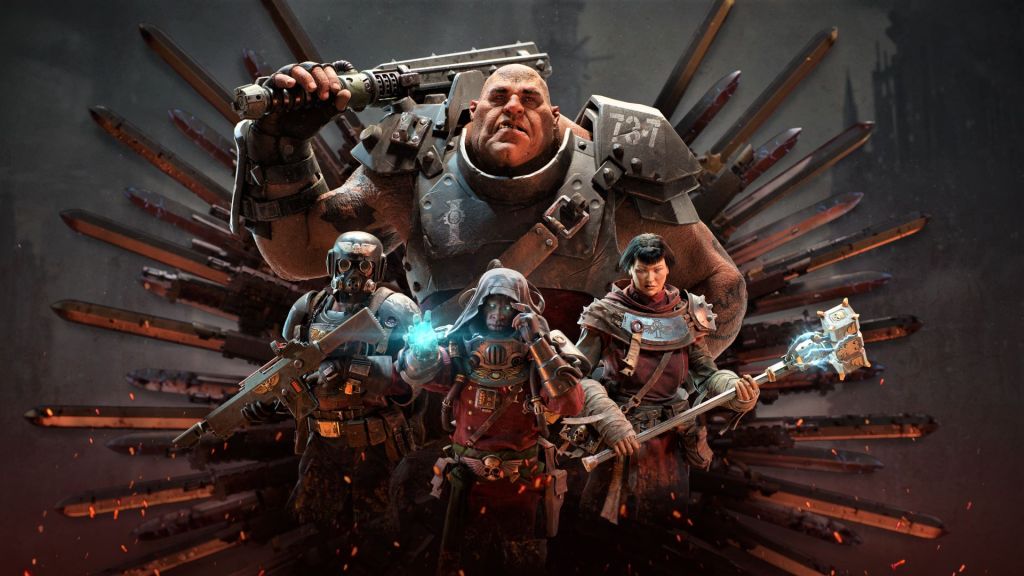 Whether it be board games or video games, I’ve always loved those that adhere to a design philosophy of gameplay and theme harmoniously reflecting and reinforcing one another. In Warhammer 40,000: Darktide, you are just one grunt amongst countless others being dispatched to fight futile, repeated battles in a war that will never see an end.

The power station in sub-sector 12 has been taken by the enemy and needs to be reclaimed again? Of course it has. It’ll need to be reclaimed when your team of four logs on again tomorrow night too, and that actually makes absolute sense when you’re playing around in this corner of Warhammer 40,000 lore.

As a penal legionnaire under the shadowy control of an Imperial Inquisitor named Grendyl, your job is to go where you’re told and fight until you die. You serve no other purpose. In fact, Darktide repeatedly drives home that your character is not special. They’re not a hero. They’re just a blunt tool that is temporarily useful to a particular authority. A single, tiny cog within the incomprehensibly vast engine of the Imperium.

Darktide is the latest in a string of games to leap forth from the Left 4 Dead mould. If you’ve ever played Left 4 Dead, Payday, or developer Fatshark’s previous title, Vermintide, you’ll know what to expect. You’ll fight alongside three other online players across a series of short missions, accruing experience, unlocking new weapons, perks, wargear, and cosmetics so that you can be powerful and skilled enough to run those same missions on harder difficulty levels for better rewards. Darktide doesn’t tread any new ground here, but it does pace its progression and rewards out in a pleasing way.

Each of the four player classes is distinct in how they play, but what’s been truly surprising to me is just how hard I’ve fallen in love with playing the basic soldier. Maybe the baggage I personally bring from years of 40k lore absorption has something to do with it, but facing insurmountable odds with just a Lasgun and your wits feels absolutely incredible.

Speaking of guns, every class has a wide variety of iconic Warhammer 40,000 firearms and melee weapons to unlock and modify, all of which are dynamically different in feel and utility, and will all surely see use no matter your favoured play style. The arms vendor’s inventory refreshes every hour with a completely new batch of gear, and running missions nets you a steady haul of currency, even if you lose.

You also unlock and equip new feats which further alter your character’s abilities and/or grant benefits to the whole party as they level up, and these are switchable at any time between missions. Suddenly see a shiny new chainsword in the store, but you’re all built to favour ranged combat? Buy it, swap your feats in an instant, and go have a ball carving up heretics.

Melee combat feels just as meaty as it did in Fatshark’s previous game, Vermintide, and the gunplay also reaches that same satisfying standard. Every shot fired feels lethally weighty, and getting into shootouts with packs of ranged enemies is joyfully chaotic.

The missions themselves are all structured as 20-minute-long gauntlets with varying objectives and randomized elements. Some culminate in a boss fight, some require equipment to be hauled, and some demand the team defend a position or force players to go defenceless while they scan corpses in the field.

It’s a good mix, and all of them are tense and thrilling in their own ways. The environment design isn’t nearly as vibrant or varied as last year’s Necromunda: Hired Gun despite the shared setting of an Imperial hive city, but the maps still look good and flow well – and Necromunda always did have a more lurid design palette to it than the broader 40k universe.

It’s a good thing too that the art direction and lighting are so striking, even on low graphical settings, because unless your PC is packing bleeding-edge hardware, that’s how you’re going to be playing Darktide if you don’t want the framerate to utterly chug.

Optimisation and stability were common complaints during the closed beta weekend back in October 2022, and circumstances in the launch period haven’t improved noticeably since. It’s really unfortunate, as this kind of fast-paced cooperative game is pretty reliant on maintaining a level of fluidity to be enjoyably playable, and Darktide appears to be struggling to meet that standard for many people.

Even with these significant technical issues, I’ve struggled to put the game down over a period of two weeks. The moment-to-moment gameplay is just so excellent. The way Vermintide’s design formula has been translated to Warhammer 40,000 is satisfyingly fitting to the wargame’s lore. Jesper Kyd’s soundtrack goes ten times harder than the assignment demanded, and infuses combat encounters with pounding industrial grunge that amps up the energy immensely. The voice work is similarly excellent, and I actually laughed out loud at some incidental, self-referential in-jokes like, ‘What’s all this Astra Militarum nonsense? It’ll always be the ‘Guard to me!’

I’m optimistic that the game’s current issues can be overcome. The fact that Fatshark are still supporting Vermintide 2 with regular content and balance updates more than four years on from its launch bodes well for Darktide’s future.

But even as omnipresent as Darktide‘s technical woes are, it’s the exhilarating thrill of a mission run that shines most brightly in my mind when I think about my experience with it. Even on low graphics settings, shining your rifle’s underslung torch down a dark corridor, only to see a horde of Poxwalkers glaring back at you before your whole squad unloads on them, provides an utterly giddying rush.

A PC copy of Warhammer 40,000 Darktide was provided and played for the purposes of this review.